When I read recently that Trey Hillman "plans to mix his three-through-six hitters depending on matchups" and spoke of other flexible lineup spots, I got a mildly sick feeling in my stomach.  This was not because I think it will hurt the offense; it was because I know this means I am in for a season of repeated complaints and snarky comments every time Hillman tweaks the lineup or dares to bat Ross Gload 6th one day and 7th the next.

There were many things Buddy Bell did which were worthy of criticism (no need to re-hash them here).  But I think the single thing which was complained about most frequently and at the same time was the least worthy of criticism was his number of different lineups.  By May, if any player batted in a different spot in the lineup in consecutive games, many fans on this site would be up in arms.

"Consistency is the hobgoblin of little minds, adored by little statesmen and philosophers and divines."  Ralph Waldo Emerson from his essay "Self-Reliance"

My first question is, where does this theory come from?  Typically when there is a debate about basebally strategy or philosophy it is between an idea from baseball tradition vs. new thinking, baseball research and/or sabermetrics.  But I don't recall hearing this "consistent lineup" philosophy in the pantheon of traditional baseball conventional wisdom.  So is this just a gut feeling that some fans have? 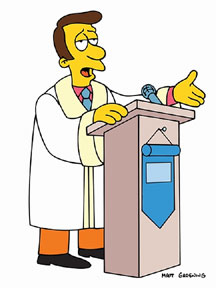 Reverend Lovejoy's favorite sermon was titled "The Nine Tenants of Constancy."  Tenant Eight is: "Thou must keep thy lineup constant if thou wisheth to reach the playoffs." It worked for the Springfield Isotopes.

I must say that it is counterintuitive to me because lineup "roles" are not consistent.  With the partial exception of the leadoff hitter, every player's role changes throughout the game.  A #3 hitter may come to the plate with runner(s) on base to knock in, or he may come up with two out and nobody on, or he may come up as the first batter in the inning, or virtually any other possible situation.  That is true of every spot in the lineup.  Now, the leadoff hitter does leadoff every game for his team and always comes up before the "heart of the order," so I can see something in the argument that you want a consistent leadoff hitter because that is more of a set role than any other spot in the lineup.  But even the leadoff hitter will frequently have at bats which do not fit the leadoff role.  If there is a runner on second and two out when the leadoff hitter comes to the plate, his job is to knock him in, not get on base so someone else can do it.

So, if lineup roles are not consistent, then why should a lineup be consistent so that players can learn those roles?

I did some half-assed internet research to see if I could find anything for or against this consistent lineup argument.  I couldn't find anything.  It is quite possible that various baseball experts have commented on this and/or that some sabermetricians have studied this.  If any of you have any sources which can support or debunk this theory, please share.