Share All sharing options for: Matt Stairs Hits the Biggest Home Run By An Ex-Royal Since 2004

Matt Stairs, always unappreciated and the 65th Greatest Royal of All-Time, blasted a mammoth home run off of mythical Dodger closer Jonathan Broxton in the top of the eighth inning tonight, giving the Phillies a 7-5 lead.

The English language is not sufficiently descriptive enough to accurately capture the majesty of Matt's homer. No, it is not still traveling, but it did knock a hole in the Dodger Stadium bleachers. 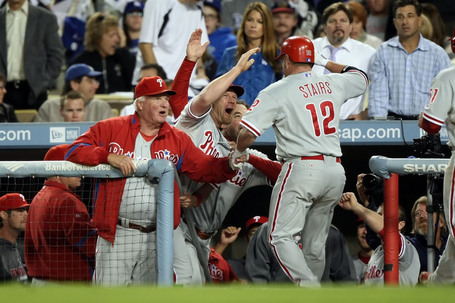 Pardon us if we rank this home run ahead of Alexis Gomez, who powered the Tigers to a 2-0 series lead back in the 2006 ALCS. Since the '06 postseason, Gomez has yet to appear in a Major League game,  and has bounced from the Tiger, to the Rocky, to the Marlins' organization. Sure, Gomez reminded us all he was still alive in 2006, but the events since then have further reinforced his obscurity. The performance of the Tigers hasn't helped either.

No, this was a moment, a swing, a shot, to rival Johnny Damon's Grand Slam in Game Seven of the 2004 ALCS. Stairs's homer swung the series to a decisive 3-1 Phillies advantage and even managed a bit of sentimental flair, thanks to its pinch-hit angle and Stairs's age. According to the WPA data, before Stairs's homer, the Phillies had only a 45% chance of winning the game. When the ball left his bat, that figure went to 83%.

As "RoyalsRetro" has pointed out, the Royals could never quite decide if they wanted Stairs to be a bench-player or a full-time guy during his three seasons in Kansas City. Nevertheless, he was plainly one of the team's best hitters during that period:

Stairs is 35th in team history in home runs with those 39, despite just 1223 plate appearances in blue & white. But it wasn't just Kansas City that never really knew what it had in Stairs (who admittedly has his limitations afoot and with the glove). The man didn't see regular playing time until he was 29 years old. In spite of it all, Stairs has hit, to date, 254 career homers, good for 180th all-time. His next regular season bomb will tie him with an odd trio with a Royals-twist: John Olerud, John Mayberry and Kirk Gibson.

Tonight, we lift our glasses to you Matt Stairs. You made up for the struggles of fellow former Royal Chad Durbin. Then, and now.