Moving on with our countdown, #42 is the surly, defensively challenged Jose Offerman. 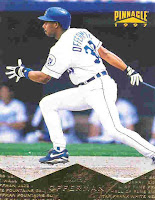 Over the last fifteen years or so of Royals ineptitude, the team has been plagued with awful defense. Miscommunication on pop-ups, routine groundballs skipping by shortstops, and wild throws have been a staple at Kauffman Stadium.

Every summer, when the team inevitably has a particularly awful defensive game, many sports radio callers or in these modern days, bloggers, will call for the team to "stress fundamentals" or "work on defense more." They will blame the coaching staff for not stressing defense enough or for not making the team field grounders all night.

I think what these calls miss is that defense is a skill, just like any other skill in baseball. Asking a bad defensive player to get much better is about as futile as asking a .250 hitter to become a .300 hitter. Could some extra work make a difference? Sure. But we're talking about a marginal difference. Bad defensive players are bad defensive players. You either put that player on the bench or at the designated hitter position, or you look to minimize his defensive exposure by moving him to a different position or replacing him in late innings. The Royals, for all their faults in the 1990s, were able to do this when they took an awful defensive player with a good bat, and turned him into a valuable part of the lineup by moving him to a different position. That player was Jose Offerman.

Jose Offerman was born in San Pedro de Macorís in the Dominican Republic, where he attended Colegio Biblico Cristiano High School. In 1986, at the age of eighteen, he signed with the Los Angeles Dodgers. In 1988, his first season full professional season, he hit .331 and was named "Best Prospect" of the Pioneer League. By 1990 he got a cup of coffee with the Dodgers and homered in his very first at-bat. He was named the tenth best prospect in baseball by "Baseball America."

In 1991 he got a prolonged look by the Dodgers, but hit just .195 in fifty-two games. Still considered one of the best prospects in the game, the Dodgers made him their full time shortstop in 1992. He responded by hitting .260 with a respectable fifty-seven walks, but he also committed a stunning forty-two errors - nearly twenty more than anyone else in baseball.

"When I make a bad play and make an error, nobody feels as bad as me. I really feel bad. I don't mean to make a mistake and those fans don't want to see it. I feel bad, that's the only thing I can say. "

Following his disappointing rookie campaign, Offerman received a two year contract from the Dodgers. The Dodgers did all they could to protect his young psyche, but he continued to put up disappointing numbers in 1993. He could hit for some average and drew a good number of walks, but his complete lack of power, his poor stolen base rates and his astounding number of errors brought many critics. Additionally, Offerman had a quiet attitude that many took as either a lack of aggressiveness, or outright surliness towards teammates.

"We try to talk to him and he listens, but he doesn't say a word. He never says something back to you. It makes you think, 'Did he understand what I say to him? Does he care?"
-Dodgers outfielder Henry Rodriguez

Dodgers officials thought Offerman was a changed man when he showed up in camp in 1994. Not just in demeanor, but physically as he had added twenty-five pounds to his frame, and not all of it muscle. Some also noticed a change in attitude from the youngster.

"He's not mean like he used to be."
-Henry Rodriguez

But there was no change in all, and to compound things even further, Offerman stopped hitting and was seen feuding with manager Tommy LaSorda after being asked to bunt. With his average barely above the Mendoza Line, Offerman refused to take extra batting practice to improve himself. After a brief suspension, the Dodgers demoted the surly shortstop to the minors to "regain his confidence."

Offerman returned in 1995 to get off to the best start of his career. By July he was hitting .320 and was named to his first ever All-Star Game. Nonetheless, the success didn't curb his surliness, nor the jeers he received from Dodger faithful.

Offerman got involved in a dugout scuffle with teammate Eric Karros and later that summer lashed out at Los Angeles media and fans for being racist, claiming, "whenever those white guys do something, it's all right. But any time when it's another black guy, it's not all right."

Offerman ended the year hitting .287 with sixty-nine walks, easily his best offensive season ever. But his defense was still atrocious and the Dodgers were fed up with his attitude. That December, they dealt him to Kansas City for left-handed reliever Billy Brewer.*

* Yea, I'm having a Pozterisk, deal with it! I don't know if this is true or not, but it seems like the Royals have milked the Rule 5 draft better than any other team in terms of quantity of useful players (of course the Twins with Johan Santana and the Marlins with Dan Uggla have gotten more overall value). Consider they have gotten a useful situational lefty reliever (Brewer), a power hitting fourth outfielder (Jon Nunnally), a left handed reliever who was good for a year (Andrew Sisco), a pitcher who was dealt for a useful utility infielder (Esteban German) and of course one of the best closers in the game (Joakim Soria). There have been some draft picks that didn't work out (Rich Thompson, Miguel Asencio, Endy Chavez), but overall the Royals have seemingly gotten more decent players than anyone else.

This is probably a result of the Royals having such a pitiful roster that they could afford to carry more Rule 5 guys, but still, you have to give them credit for utilizing a process that gives them free talent, and for finding guys that could actually benefit the team.

Offerman replaced the sure glove of Greg Gagne at shortstop and Bip Roberts was acquired to replace Chico Lind at second base, causing a huge drop off on defense for the Royals. However, with the team finishing dead last in runs scored, they were desperate for some offense.

"If the trade-off is a little hitting I feel pretty darn good about our lineup. We don't have many out guys."
-Royals General Manager Herk Robinson

Jose started slowly, but finished the season on a tear hitting .346 over the last two months of the season. He finished the year leading the team in average (.303), on-base percentage (.384), tied for doubles (33), triples (8), runs scored (85) and walks (74). The Royals were also able to neutralize his defensive deficiencies by having him split time between shortstop, second base and first base. Offerman finished with just sixteen errors, the fewest he had committed in a full season in his career. To reward him, the Royals gave him a two year contract.

In 1997, the Royals had Offerman play second base full-time and flanked him with with veterans Jay Bell at shortstop and Jeff King at first base. Offerman was on fire in June, hitting .342. He ended the season hitting .297 and committed just nine errors in 101 games at second base.

"It's a lot more fun here than it was before, and it's one of the reasons why I'm doing well - it is the way I get treated here. ''

1998 was a contract year for Offerman and he played like it. He led the team in hitting at .315, on-base percentage at .403 and led the league in triples with thirteen. His team leading 191 hits were the most by a Royals player since Kevin Seitzer in 1987. He led the team in walks with 89 and steals with 45, and scored 102 runs. He hit safely in twenty-seven consecutive games, the second longest hitting streak in Royals history. 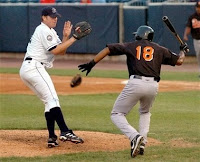 Offerman spent three and a half largely disappointing seasons with the Red Sox before bouncing around the league from Seattle to Montreal to Minnesota to Philadelphia to the New York Mets. He was finally let go by the Mets in 2005 and unable to find work in Major League Baseball.

Unwilling to let the dream die, he signed on with the independent Atlantic League in 2007. On August 14, Offerman was hit with a pitch, to which he responded by charging the mound with his bat. He managed to break the finger of pitcher Matt Beech and caused a concussion to catcher John Nathans. Offerman was banned from the league and was arrested for assault. He was sentenced to two years of probation for second degree assault.