The Bird is the word! At #43, Royals pitcher Doug Bird.

Today there is a lot of talk about whether to keep Joakim Soria as the closer, or move him to the rotation. Although Dan Quisenberry and Jeff Montgomery never started a game for the Royals, many good Royals relievers did make the transition, with varying results. One such pitcher who was probably better off remaining in the pen was Doug Bird.

Bird was a Southern California kid, taken in the third round pick by the Royals in the June Secondary Phase of the draft in 1969. He had plans to instead head to USC or UCLA to play college ball, but was convinced by a Royals scout named Spider Jorgensen (later his manager in rookie ball), that he would get to the big leagues quickly with an expansion team like the Royals.

Just a year into his professional career, it looked like Bird would have to put baseball on hold to serve his country in Vietnam.

"I got a notice to report for a physical and immediate induction into the Army. Then somebody blew up the draft board in South Pasadena. All the paperwork went up in smoke. By the time they got everything straightened out, they had switched over to a lottery system where they drew lots with birthdates on them. My number was up in the 280s, and they never called me.

If I knew who blew up the draft board, I'd thank him, cause otherwise I'd have been gone. End of baseball career."

Bird was used primarily as a starter in the minor leagues, posting a 1.84 ERA in 22 games in 1970 with Waterloo (but finishing with an 11-9 record!) and winning fifteen games the next season in San Jose. At the end of the 1972 season he was promoted to AAA Omaha, where he pitched out of the pen for seven ballgames. After four relief appearances in Omaha to start the 1973 season, the Royals called up him up to the big leagues to pitch out of their pen.

Gene Garber had been the most called upon late inning Royals reliever to begin the year, racking up a few saves along the way. Manager Jack McKeon found his 1.21 ERA to be too valuable to be used in the pen, so he called on Garber start some games in May and June. Garber tossed two complete game victories, then was shelled in his next two starts.

Bird was used sparingly in the pen at first, but by June 6, had had posted a 1.99 ERA in 22 2/3 innings of work. McKeon was now using Bird in many close games, often times in save situations. This was in the days before Tony LaRussa had institutionalized the "closer" position, so many of these saves were more than an inning of work. And there was not really a designated "closer". Save opportunities went to Bird, Garber (who was now back in the pen), Bruce Dal Canton, Joe Hoerner - whoever had the hot hand. The best reliever was instead known as a "fireman", a guy who could come into a tight situation, ninth inning or otherwise, and put out a fire. Bird was McKeon's most trusted fireman, and along the way got a bulk of the save opportunities.

"So the manager, Jack McKeon, made me the closer. Nobody asked me, but it was okay. I preferred it to doing nothing for four days between starts."

That season the Royals enjoyed their first ever winning season, with Doug Bird leading the team in saves with twenty. It was the second most ever in a season by a Royals pitcher, and stood as the franchise record for saves by a rookie reliever until Mike MacDougal in 2003. Bird led Royals relievers with a 2.99 ERA and fifty-four appearances, despite spending the first month of the season in Omaha.

In 1974, Bird was again the primary fireman in the pen, but racked up just ten saves. Why? Royals starters finished fifty-four complete games, twenty coming from Steve Busby. Bird would again lead Royals relievers in ERA at 2.73 and appearances with fifty-five. McKeon even let him start a game in the last week of the season and Bird went the distance in a 2-1 loss.

By 1975 the Royals were looking to contend, but by July they were barely over .500. On July 23, they fired McKeon and hired former Rangers manager Whitey Herzog. The club got red hot over August and closed what had been an eleven game lead by Oakland to just five by September 6. Bird had been the most frequently used reliever throughout the year, collecting eleven saves along the way. Nonetheless, Whitey had Bird start the second game of a crucial doubleheader that day against the Angels. Bird responded with seven plus innings and the win, completing the sweep and drawing the Royals to within four and half games of Oakland. Bird would start three more games down the stretch, but would fail to build upon his success. The Royals would fail to catch the A's, although they did enjoy their best season ever with ninety-one wins and a second place finish.

Bird began 1976 in the pen, but May he was back in the rotation.

"I wasn't as strong as I should have been. I'd begin to fade about the sixth inning."

It didn't help that Whitey drove Bird pretty hard, as he did with all his pitchers. Bird made twenty-seven starts, and went at least eight innings in eight of those starts, including a ten inning affair against Milwaukee. Despite the long outings, Bird continued to exhibit masterful control, going 46 2/3 consecutive innings in July without yielding a walk, a team record. Bird finished the year with a 12-10 record and a 3.37 ERA in 197 2/3 innings of work. In thirty-eight games, he walked just thirty-one batters. He pitched in relief in the American League Championships Series, picking up the win in Game Four.

Whitey had Bird pitch out of the pen most of 1977, with spot starts along the way. It was clear where Bird was more effective. He posted a 2.61 ERA as a reliever and a 9.55 ERA in five starts. He led the team with fourteen saves and fifty-three appearances. In the playoffs, he appeared in three games in relief without giving up a run.

In 1978 Whitey had an experienced pen full of colorful characters. Steve Mingori was the loony lefty. Al "The Mad Hungarian" Hrabosky was known for his wild antics on the mound. Marty Pattin was known for cracking up his teammates with his "Donald Duck" impression. And then there was Doug Bird. Whitey affectionately labeled the foursome "Mungo, Hungo, Duck and the Bird." Although the other three put together the foundation for a solid pen, Bird struggled through his worst season in Kansas City, compiling a 5.29 ERA.

For the third straight year, the Royals faced the Yankees in the playoffs. The teams split the first two, and the Royals were leading the pivotal Game Three by a score of 5-4 in the eighth inning thanks to three George Brett home runs. Paul Splittorff retired the first hitter in the eighth before allowing a single to Roy White. Whitey brought in Bird to relieve. After falling behind 2-0, Bird offered up a fastball to Yankees catcher Thurman Munson that ended up 420 feet away from home plate, over the left centerfield wall.

"The story of my year. I knew he hit it good. I didn't even bother to watch."

That was the final straw for Bird in Kansas City. At the end of spring training of 1979, the Royals dealt Bird to Philadelphia for shortstop prospect Todd Cruz. Bird would bounce from the Phillies to the Yankees to the Cubs to the Red Sox. 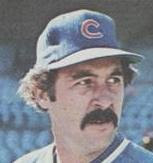 "The Cubs made me a starter again. In my last start in '82, I tried to score from second on a hit. I collided with the catcher, flipped up in the air and came down on my right shoulder. That winter they traded me to the Red Sox. The shoulder didn't feel right. I had some good days, some bad. They talked about an operation, but I was 33. There would be a year of rehab. It wasn't worth it to me. So I quit."

Doug Bird was a solid reliever, but his stuff was so good it was worth seeing if he could contribute as a starter. Somehow, those teams back in the 70s were able to win without a ninth inning "closer." I don't know whether Joakim Soria is good enough to become a solid starting pitcher, but the Royals should not be afraid of finding out.