The Royals Radio Network is comprised of over eighty affiliates and stretches across seven states. In this recurring series (previous features listed below at the bottom of the page) Royals Review attempts to give each affiliate its proper airing, celebrating the regional reach and heritage of Royals baseball. In an era defined by the endless quest for the big money, baseball on the radio is a decidedly low-stakes, low-tech venture. Let it always lay hidden like a strength in the backyards of the mind.

Four hours west/northwest of Kansas City, Holdrege is the Seat of Phelps County and a key affiliate in southwestern Nebraska. Despite being mostly unchallenged in rural Nebraska, the Royals have only seven radio affiliates in the Cornhusker State with the smallish Holdrege left to carry a flag that’s been dropped by Grand Island. Then again, as we know from BHWick’s look into the history of the network the Royals have always been weirdly weak in Nebraska: even in the heady days of 1980, Kansas City had only nine affiliates there, although two where in the aforementioned Grand Island. Holdrege remains the firewall against apathy in its corner of the state.

Founded in the 1880s, Holdrege is named for George W. Holdrege, a railroad executive who played a key role in developing the area around Phelps County, including encouraging immigration. In 1928 a monument to Holdrege was unveiled in town. According to the Chamber of Commerce, Holdrege is a great place to live because "Holdrege Focuses on ‘Family’", and I can only assume those quotation marks around "family" mean that they’ve come to define it in a different way in Holdrege. Makes sense too, considering that 23% of Phelps County voted for Barack HUSSEIN Obama this November.

Have you noticed that there’s like no celebration of Christmas anymore? Not in Holdrege, which is already offering Christmas Horse & Buggy rides and on November 13, had Christmas Carolers singing downtown. The fun will run through December, with Santa’s House located on East Avenue, across from the bank. Aside from Christmas, the big event in Holdrege is Swedish Days, held annually at midsummer. I’m sorry, midsommar. This last year, the Fest featured book talks, a Christian music concert, a fishing contest, an air show, and of course, the tassel-dances. (Video highlights here.) However, the most unique event, may be the annual bed races. (Again, its all about "family" in Holdrege.) Apparently, bed racing is a big folky Swedish thing, and a hallmark of many similar festivals. This year’s celebration also marked Holdrege’s 125th anniversary. Your humble blogger attempted to find more information on the Days, especially the winner of Swedish Days King & Queen. However, Holdrege does not appear to have a local newspaper, making it especially difficult. If you know who won, please let us know… Similarly, I really wanted to add a nice picture of a Swedish-looking woman to help illustrate this post, but could find nothing online in that direction. I guess there aren’t any. All I can offer is this late-90's style web graphic.

A variant of the Cross of Scania, every Scandinavian country has a flag with this design. Which is your favorite?

Seven miles from Holdrege lies the town of Atlanta, which is both Dayton Moore’s favorite place to scout and perhaps the most interesting historical site in Phelps County. Now essentially a ghost town, during World War II Atlanta was the home of a prison camp called Camp Atlanta. Originally built to hold conscientious objectors, Camp Atlantaa (this is a great link, btw) eventually held over 3,000 German POWs. The labor provided by these prisoners was a major boon to local agriculture. As to how much better the Nazis were at husking corn were than the COs, it is not known. Glenn Thompson, a Holdrege resident, is the author of Prisoners on the Plains (link) which is an account of the Camp. 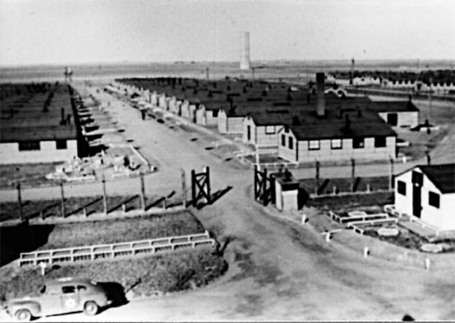 On the south edge of town lies Lake Seldom, which is a restored wetland designed to serve as a habitat for birds. Although an outsider might not realize it, this region of Nebraska is one of the most unique birdwatching regions of the country. (Ideally, the Royals would find a way to capitzlie on this regional strength. Sandhill Crane Day at the K NOW!) If birding isn’t your thing, you can roll a few frames at the Hasty Lanes Bowling Alley.

No Major League player has ever been born in Holdrege, and as far as I can tell, anywhere else in Phelps County. Considering only 105 native-born Nebraskans have ever made the Major Leagues, this is not that surprising. (Seriously, how shockingly low is that number? Then again, as I said last week, no one lives in Nebraska.) Otto Miller, however, was born in Minden, and may be the closest thing to a local player ever. Born in 1889, Lowell Otto Miller, nicknamed "Moonie", was a catcher/1B for the Brooklyn Robins (nee Superbas) for thirteen years (1910-1922). In 927 career games, Moonie hit .245/.275/.308, which wasn’t terribly good, even in the 1910s, and comes out to an OPS+ of 67. The Robins made the World Series in both 1916 & 1920, losing both times (Red Sox & Indians). Moonie went 3-22 with a walk in post-season play. Miller seems to have stayed in Brooklyn after his career ended, dying there in 1962. Miller’s death was a strange and possibly tragic one, as he fell/jumped from a fourth story window.

On a happier note, some dude who walked across America, or is, or was trying, went through Holdrege this April. It is uncertain as to if he listened to the Royals while doing something.

Finally, a poem from Bill Holm, a Minnesotan of Icelandic heritage who looks disturbingly like Ron Gardenhire.

I skip stones into billowing Nebraska wheat
as if it were a rolling golden ocean.
One nips the beard in seven arcs until
it cuts into a breaker and sinks.
No telling how far that stone will drop.