On May 9, 2005, the Royals invaded Canada to take on the Blue Jays. At 8-23, the Royals were already fifteen games back in the AL Central, but you couldn't tell that to the 13,000 rabid Jays fans who watched a brilliant baseball spectacle that Monday night in the Skydome.

With the Blue Jays leading 6-1, illustrious Royals manager Tony Pena -- who would be fired later that week -- sent a young Leo Nunez out in the bottom of the 8th. Prior to that season, Nunez had never pitched above A-ball, and like fellow Royals rookie Ambiorix Burgos, Nunie was a mere twenty one years young. Despite his inexperience, Nunez was unfazed, striking out Ken Huckaby swinging to begin his career. He followed that K with another, this time getting Orlando Hudson looking. With two outs and no one on, he induced a pop-up foul from Reed Johnson, and walked back to the dugout with a perfect lifetime ERA. The Allard Baird development machine had just churned out another great young reliever...

At the time, nobody really had any idea why the Royals had rushed Nunez and Burgos (who had been called up on April 23) to the Majors so soon, and nobody ever found a better answer than "well, all the other guys are terrible". (I've long held that there's sorta a reverse racism  in baseball regarding Dominican pitchers, as both Nunez and Burgos were, a kind of romantic mystique that imagines that they're all so talented that they can handle anything, while also so alien that they aren't really nervous or distracted because they probably don't know whats going on or who anybody is, while Bubba Kyle McTevins is gonna be overwhlemed because he's dealing with information overload and is still geeked up because he's sitting next to Mark Grudzielanek in the dugout. Just a theory, love to see what you think.) Burgos, it was thought, was more talented, but Nunez might also be a starter. Again, why he needed to jump from A-ball to the American League for a 8-24 team rather than working on his repertoire in the minors was never really explained. I suppose the Royals just thought that other teams had young pitchers show up out of nowhere, so that that might also happen with Burgos and Nunez, despite the fact that combined they were 42 years old and weighed 200 pounds.

The faces of Nunez.

Nunez started well, allowing just one earned run in his first five games. However, he then turned in two bad outings in relative proximity, being left on the mound to allow five and six runs respectively. After eleven appearances his ERA was over 8.00. Still, the reputation of the team's coaching staff speaks for itself, and we really cannot over-state the instruction he was recieving. Nunez was never wholly effective for any long stretches as a rookie, and ended the season with an ERA of 7.55 (although this was the wretched STEROID ERA, so that was actually a league average ERA, sincerely, the uninformed radio talk-show guys of America). Weirdly, his 53.7 IP for the '05 Royals remains his career high, despite the fact that a) he was ineffective and b) there was absolutely no point to him being out there.

Nunie's (I can't remember if we called him "nunie"/"noonie" or not) next two seasons were something of a holding pattern. In '06 he actually spent a good portion of the season in the minors and appeared in only seven games with the Royals. While Nunez had seen action as a starter earlier in his minor league career, in '05 and '06 the Royals used him exclusively as a reliever for two years. After another wave of injuries and time in the minors, Nuez reappareaed in '07. In '07, naturally, it was time to let him start again. Why? No reason really, but it wasn't like the new regime had anything to lose. 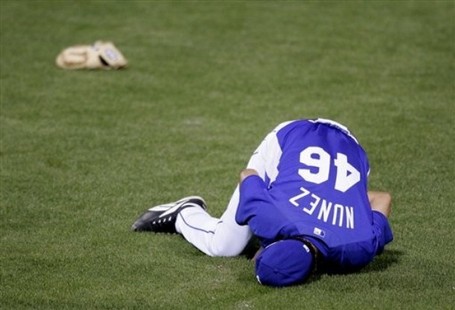 Nunez took one for the team in Spring Training, 2007.

From late July through August of '07 Nunez made six starts and randomly appeared as a reliever once. In those seven games he wasn't bad, posting a 4.05 ERA in 33.1 IP. Considering he also allowed seven home runs over that stretch, he was either lucky to only have a 4.05 ERA or actually a much more effective pitcher who'd had some bad homer luck. Nunez managed twenty five strikeouts against just ten walks as well. Considering he was still just 23 years old, was coming off some minor injuries in '06 and had never really been consistently used, it wasn't a bad beginning. Nevertheless, the six runs he'd allowed in his sixth start, against Detroit, seemed to discourage the braintrust, and Nunez would never start for the Royals again. Instead, Leo made six relief appearances in September, running off a 3.48 ERA stretch, and finished '07 with a 3.92 ERA.

Nunez made the Opening Day roster out of Spring Training in '08 and appeared in the Royals first two games, both victories. Through May 27th, Nunez was a regular member of the Hispanic Panic bullpen and one of its, well, I guess we should be horrible shouldn't we... one of the real key compadres. After twenty one appearances in 2008 Nunez was the owner of a 1.71 ERA and owned a clean slate homer-wise. Unfortunately, he hit the DL with a sore muscle in his right side. Nunez would return in late July, and while he was adequate in his last twenty four games pitched, he wasn't as awesome as he had been, posting a 3.95 ERA in 27.1 IP.

As it would turn out, Nunez would make his final appearance as a Royal during the season finale, appearing in the bottom of the 7th with the bases loaded and the Twins leading 2-0. Nunez allowed a two-run single to Delmon Young, but ended the rally with a "double-play" fly ball from Brendan Harris and a putout at home. The Royals would lose the game and Nunez would ever appear in a Royals uniform again.

So was Nunez improving? Was he poised for a breakout, or at least sustained success? Here's a big table of numbers, including the somewhat pointless '06 numbers:

If anyone wants to calculate his career FIP, you're welcome to it. It's possible that we've already seen whatever Leo's breakout looks like, the stretch from '07 through late May of '08 when he upped his strikeout rate, while keeping the walks under control. Nunez was much more effective against righties than lefties (who always slugged well against him) over his Royal career, a largely irrelevant fact considering he was managed mostly by Buddy Bell and Trey Hillman. Still, a great many of these numbers immistakably trend positive, which can't be said for the man he was traded for, our beloved Mike Jacobs. Its possible that, on the day he was traded, Nunez was the best pitcher that Moore had dealt from the team, and even so, you could debate overall the merits of Nunez versus Ramirez.

For such a young guy, Nunez made his way into a great number of Royals games and discussions in the latter half of this anxious decade, and will not leave a small entry in the eternal Royals encyclopedia. Leo appeared in 106 games as a Royal, good for 49th in team history, between Dan Reichert and Jerry Don Gleaton. His 159 career innings pitched is good for 87th in team history, just trailing current former Brave Kyle Davies. Finally, Nunez struck out 102 batters as a Royal and is tied, perhaps forever, with well-remembered 2003 hero Brian Anderson at 86th on the all-time list.

According to WPA, two appearances by Nunez stand out as his most glorious. The first came way back in 2005, in his fourth career game. With the Royals leading Baltimore 6-4 (it had been 6-0) Nunez relived Runelyvs Hernandez with two men on and one out in the fourth. Nunez ended the rally, striking out Melvin Mora and retiring Miggie Tejada to end the inning. He followed that up with a four-batter scoreless fifth and a 1-2-3 sixth, giving way to Jamie Cerda. Thanks to Nunez's scoreless 2.2 IP, he earned a 29% WPA, which he would never match in his career. He came close however, three seasons later, on Opening Day 2008 against the vaunted Tigers. (AKA the Brett Tomko Game.) With the scored tied at four, Nunez pitched a scoreless four-batter ninth (walk) as well as a perfect tenth, holding down the fort for two innings before the Royals took the lead in the eleventh, and good for a WPA of 28%.

A Marlin now, Nunez must endure the bitter knowledge that he must endure as a professional athlete in Miami.

Nunez, let me take a long last look, before we say goodbye.

*Leonel miscellania: Weirdly, Nunez leaves the Royals with a bizarre dominance over Mark Teixeira. In nine career Nunie-Tex battles, Teixeira is .000/.000/.000 with a strikeout. Completely meaningless, but the kind of thing that will get mentioned on televsion and, sadly, will probably dictate a situational usage of Nunez at some point. Leo's most common strikeout victim? Scrap-yard hero Brandon Innnnnnnge, who has four strikeouts against LN in ten plate appearances. Ever the gentle soul, there is no player who Nunez has pegged twice, only a bunch of solos.