Last week we looked at the worst free agent signings in Royals history, today we look at the best. Again, the caveats:

2. I only included free agents signed from other teams, not contracts given to players already on the club.

3. I only included the initial contract figure, but not extensions.

I was also asked about Jose Guillen and Yasuhiko Yabuta on the "worst" list, but the same applies to Gil Meche and Ron Mahay on the "best" list - I'm going to hold off on putting any of them on the lists since their contracts are still ongoing. But they may very well find themselves on these lists someday. 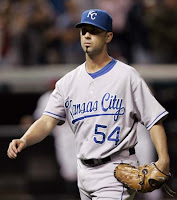 Well this should give you an indication of the quality of free agents the Royals have signed throughout the years. Riske was a solid reliever who signed a one year deal with an option in the winter of 2006 after a solid career with the Indians, White Sox and Red Sox. His wife was a Kansas City native, and it is possible that was a factor in Riske's decision, although I don't know many guys willingly move closer to their in-laws.

Riske got off to a rough start, posting an ERA close to seven in April. He would not allow a run in his next eighteen appearances, then went on another ten consecutive scoreless appearance streak in June and July. He ended the year with a 2.45 ERA as the Royals showcased their first competent bullpen in almost fifteen years. That winter, Riske declined his player option and signed a three year deal with Milwaukee.

Gibson was just two seasons removed from his MVP season when he signed with the Royals in the winter of 1990. Knee and hamstring injuries had robbed him of playing time since his famous World Series home run, and teams were reluctant to invest much money in him. The Royals offered the outfielder a two year deal, outbidding the Brewers, Twins and Expos.

Gibson provided much needed power early in the season, slugging .545 with six home runs in April. My memory could be deceiving me, but I seem to recall Kirk Gibson hitting the longest ball I have ever seen in Royals Stadium. I don't remember if it was fair or foul, but he yanked one that cleared all of the seats in right field general admission.

He slumped badly in May, but resurrected his numbers a bit that summer. He was pretty awful defensively, and nearly cost Bret Saberhagen a no-hitter that year when a blooper hit off his glove. The official scorer ruled it an error, although some saw it differently. Injuries nagged at Gibson all year, and he was essentially dumped at the end of the year to the Pirates for reliever Neal Heaton. Still, Gibson finished second on the team in home runs with sixteen, was second in slugging at .403, and led the team in walks with 69. He had a bit of a disappointing season, but considering what the Royals paid him, it was one of the more productive free agent seasons in Royals history. 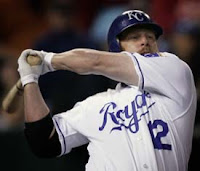 Stairs wasn't given a chance to play every day in the big leagues until he was twenty-nine. When given the chance, he was a "Three True Outcomes" player, slamming home runs and drawing walks. He signed with the Royals in 2004, his fifth team in five seasons. He was coming off a season in which he had slugged .561 with twenty home runs in limited action, yet the Royals were able to sign him for the low, low price of $1 million.

Stairs was supposed to be a bat off the bench, but by Memorial Day he was playing regularly in place of the injured Juan Gonzalez. Stairs continued to slam home runs, finishing second on the team with eighteen. He also finished second on the team in RBI with 66 and led the team in walks with 49. Despite being embarrassed that such a lowly regarded free agent could be among the team leaders in several offensive categories, the Royals rewarded him with a one year contract extension.

Rey Sanchez had bounced around with the Cubs, Yankees and Giants as a reserve infielder before signing a one year deal to be the starter with the Royals in 1999. Sanchez was known for being a sure-handed defender, and he did not disappoint. He committed just thirteen errors all season. Offensively, Sanchez was a poster boy for the term "empty batting average." He didn't hit for any kid of power, and drew very few walks, but he hit a career high .294. The Royals rewarded him with a two year contract extension.

Mike MacFarlane, a free agent? Its true. The Royals foolishly let MacFarlane, a long-time homegrown favorite, walk after the 1994 season to let Brent Mayne play every day and to trim payroll. Mac went to Boston, but suffered a disappointing season. The Royals realized their error, and were able to bring MacFarlane back at a much reduced price. Mac got off to a slow start and was under the Mendoza Line in May, but he slugged .677 in June and would finish with nineteen home runs, second on the club. His .499 slugging percentage would lead the ballclub, and he would have one of his best seasons throwing out base runners.

He would slump a bit in 1997, splitting time with rookie Mike Sweeney, but he still managed an 85 OPS+, not shabby for a catcher.

Gagne was part of the last big free agent splash the Royals made in the winter after the 1992 season. They signed Gagne, David Cone, brought in slick fielding Jose Lind, and even pursued slugger Joe Carter. The Royals were able to lure Gagne to Kansas City over his hometown Red Sox with a $10.7 million deal. The shortstop position had long been a position filled with abysmal hitters since UL Washington was let go. Gagne provided a solid, although not spectacular bat. More importantly he was a sure-handed defender that fit perfectly on a ballclub deep in pitching that played on artificial turf.

Gagne's best offensive season was his first in Kansas City. He hit .280/.319/.406 with a career high 57 RBI. He would never match those numbers, but he continued to provide excellent defense, committing just forty errors over three seasons. After 1995, the Royals could no longer afford to keep Gagne, and he left for Los Angeles, allowing the Royals to suck again at the shortstop position. 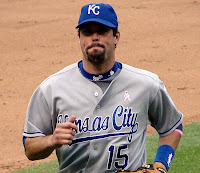 Grudzielanek was pretty similar to Gagne. Both were gritty veterans who had played for contending ballclubs. Both were pretty average with the bat, although Grudz was much better than Gagne. Both were very sure-handed defensively, although neither made a lot of spectacular plays.

Grudz was thirty-five when he signed with the Royals. He had spent his career with the Expos, Dodgers, Cubs and Cardinals, winning many games along the way. The Royals hoped he would provide a winning attitude for their clubhouse.

"It's going to be a challenge. Don't get me wrong. It might take us a little while. But you've got to have a few people to sign on and be a part of it."

Grudz would put together two very consistent seasons as a contact hitter who did not walk much, but did not strike out much either. He didn't hit home runs, but had good gap power. More importantly, he committed just ten errors in his first two seasons as a Royal.

His solid play earned him a one year contract extension, although it now appears as if his Royals days may be over. His .300 average is still third all-time in franchise history.

Before he was a cantankerous, meddling manager, Bob Boone was one of the best defensive catchers in baseball. By the winter of 1988, Boone had put together an illustrious career and was coming off an excellent season. But he was forty years old and the Angels would no longer guarantee him a starting job. The Royals promised Boone a starting job in Kansas City, and offered him a one dollar raise. Boone happily accepted.

Boone didn't hit for any kind of power, but he had great plate discipline, drawing forty-nine walks. He hit .274 and struck out just thirty-seven times. He was a solid presence in the clubhouse, and threw out nearly forty percent of would-be basestealers, earning his seventh Gold Glove. The Royals would give him a more lucrative contract extension, but he would have just one more disappointing season before calling it quits and annoying Royals fans with constant lineup tinkering as manager.

Belcher had put together a decent career as a workhorse starter when he signed with the Detroit Tigers. He was absolutely shelled that season and became a leper on the free agent market. He resurrected his career in Seattle, where he provided a stabilizing force in the post-season rotation for a young Mariners club. Still, he did not generate many offers that winter, and decided to return to the Midwest with the Royals on a one year deal.

Belcher would be excellent for the Royals, posting a 3.92 ERA and leading the team in wins and innings pitched. He would finish 15-11 with four complete games. The Royals would reward him with a much more lucrative two year deal, and he continued to be a very solid workhorse in their rotation.

David Cone had long been "the one that got away". He was a Kansas City native, drafted by the Royals, but traded away just as his Major League career was just getting started. He achieved fame and fortune in New York, but after winning a World Series in Toronto, he was eager to return to his roots. Ewing Kauffman wanted to make one last push for a championship, so the ballclub went on a free agent splurge that included a three year deal for David Cone.

Cone was a tough luck pitcher at first. By the end of July of 1993, his record was a poor 6-10 despite a 3.56 ERA. But he finished the season strong with a 3.12 ERA in the second half. In 1994, few could stop Cone. After dropping his first game, he won his next eight starts in a row, including three straight complete game shutouts. He finished third in the league in ERA, second in wins, and won the Cy Young Award.

Sadly, late that summer owner Ewing Kauffman passed away. His death, coupled with the player's strike, put the team in financial uncertainty. General Manager Herk Robinson was ordered to cut payroll and David Cone was the first casualty. He was dealt back to the Toronto Blue Jays for three minor leaguers of little consequence. The Royals would not sign another major free agent until 2006.

The Royals signed David Cone when I was in the prime of my childhood - old enough to understand baseball transactions, young enough to not be jaded. I had been too young to enjoy the 1985 Championship, but the Cone signing gave me visions of future championships. But, like much of my high school days, I would be left disappointed, frustrated and confused. Cone was essentially dealt for a handful of beans, leaving me bitter for over a decade.

Now that the Royals are dipping their toe back into the free agent pool, let us hope they populate more of this list than last week's list.