What Do Royals Fans Have to Be Thankful For?

Share All sharing options for: What Do Royals Fans Have to Be Thankful For?

What do Royals fans have to be thankful for? Quite a lot, actually. I'm not generally a voice of boosterism, but when I started thinking about it, there were a lot of positives.

Zack Greinke: We -- and I was among the most guilty of this -- should stop worrying about whether or not Greinke will ever "break out" and become an Ace, whatever that means. He's an Ace now. According to BP's handy VORP stat, Greinke was the 22nd most valuable pitcher in baseball last year, and the tenth best in the American League. Moreover, Greinke's track record and profile suggest he's not merely a one-year VORP wonder (I'm looking at you Scott Baker) either. Even before we consider the off-the-field backstory, two or three years ago we still couldn't be sure this would happen, but it did. Good things can happen to the Royals. With his stuff, Greinke's one of the funnest pitchers to watch in the game and we know that somewhere inside there's one of baseball's more unique perspectives, a breath of fresh air in a pretty boring sport, athlete-wise. I like knowing that Greinke isn't just another good ole boy from the South who knows he's a badass and has pointless facial hair and would punch a wall if he got shown up by his manager and hunts in the offseason, etc. etc. Yea, he might not be a Royal forever, but that doesn't mean we shouldn't enjoy him while he's here.

Joakim Soria: Forget the stellar numbers for a moment and just think about how you feel when he takes the ball in the ninth. Not only are you 100% sure he's going to get the save, you really expect at least one strikeout and a handful of pitches that look absolutely sick. And that guy plays for the Royals! I loved Joe Nelson, but just think how far the Royals have come. We have a guy on our team with a cool nickname who creates an electric atmosphere when he runs onto the grass. Yes, he should be starting, but having one of the best two or three short-relievers on your team doesn't suck. He's still young, and he's going to a Royal for a long time. Savor it. This isn't normal.

Gil Meche: We're two years into his infamous five year, $fifty five million dollar contract and everyone's a happy camper. After a rough start last season (an 8.00 ERA after five starts) Meche rebounded to match his 2007 levels. An increasingly affordable rotation anchor, Meche continues, along with Soria, to define everything that's gone right with the Dayton Moore regime. Meche is already the 73rd Greatest Royal of All-Time and could end his contract as one of the franchise's all-time greats. Yes, he's sometimes maddening to watch and seemingly has never had a 1-2-3 inning, but he's been reliable and one of the most effective starters in the AL for two seasons (14th in the AL in VORP in '07, 15th in '08). And can you imagine if it had gone badly like most of us thought it would? Unspeakable annoyance and horribleness. But we've avoided that. Now about that Jose Guillen...

Mike Aviles in 2008 Happened: The Royals kept playing Tony Pena Jr, who kept not hitting. Like, not hitting at an historical level. Nevertheless, the Hillman/Moore regime seemed donkey stubborn about ex-Brave TPJ, as did a few notable members of the local media. We bitched, we moaned and eventually, in a completely sane, utterly necessary move, dude actually lost playing time. It was like the world actually made sense. Not only that, but his replacement, Mike Aviles, the quintessential sabermetric hero with no scouting love, showed up and had the week of his life to begin his career. Then it was the month of his life. Then it was the two months of his life. Then it was the three months of his life. Really against their will, the Royals replaced the worst player on the roster with a guy who probably should have won the Rookie of the Year. Again, this really happened and it happened to our team. Cool.

Mike Moustakas, Eric Hosmer, Billy Butler, Alex Gordon: The odds are that two of these guys will reach an All-Star level, perhaps higher, before its all said and done. It hasn't happened yet, but at least its possible. Again, it wasn't always like this.

The Uniform: From pants to cap, the Royals have one of the simplest yet most appealing uniforms in the game. There's a word for that combination: elegance. Blue and white, with maybe a touch of gold. Simple. Pretty. I'm even willing to look past the obvious Dodgers-ripoff in the design, given that the franchise has remained loyal to it through all these years, save a few utterly unavoidable dalliances with black as a third color and the sleeveless look (which I actually loved with blue sleeves underneath). Better still, the team finally brought back the powder blues in 2008, which look fantastic. I swear have the teams in the game are playing in absolutely hideous uniforms at any given moment and you can never put the Royals in that category. 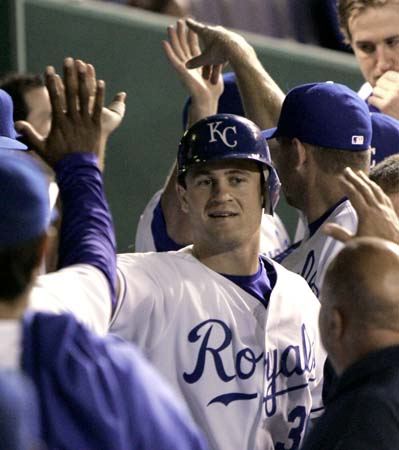 What a great uniform.

The K: The K should really almost be in the same paragraph as the uniforms. The K manages to look modern and timeless at the same time, and should be even better this season with the renovations done. I love that the K isn't a mallpark (knock on wood with renovations coming) and I love that it isn't supposed to look like the Baker Bowl. The retro-look is as nineties as teal pinstripes. As long as the fountains and some amout of green space remain in the outfield seats remain, I'm happy. And wonderfully, the big honking scoreboard actually accentuates the stadium's unique outfield and draws attention to it. Better still (knock on wood) the K is still simply "The K" and not "Qwest Ballpark" or "Circuit City Field". I can't explain how wonderful this is, and how much it sounds better and better with each passing year. On top of that, there are a higher percentage of good seats at the K than almost anywhere else in the game, thanks to the design of the seating bowl and the lack of a bazillion luxury suites. Good, affordable prices, too.

The AL Central: It doesn't get talked about much, but despite Selig's incessant preening about how revenue sharing and the luxury tax has "worked", perhaps the biggest thing baseball did to level the playing field was simply adding two Central divisions. In effect, most of the American League's smallest markets now have their own little competition going, with the winner getting to face the behemoths from the East Coast Megalopolis and Greater L.A. in an essentially random showdown. Last year, when us Royals fans were bragging about how we'd do in the National League, we should have also been thankful we weren't still in the old AL West or, God forbid, the AL East. The aging Tigers and White Sox won't be contending in two years, maybe sooner, which means Dayton Moore only needs to build a better team than the Twins and Indians, who are just as limited financially as he is.

Progress: Finally, we're makin' progress. Here are the win totals during the Royals Review Era (since 2005): 56, 62, 69, 75. The Royals don't even have a top ten draft pick next year! (Which is actually kinda bad, I suppose.) Not only is the big league team getting better, everyone agrees the farm system is getting better as well. Is anything assured? No. We don't know where this will end, whether its a World Series Championship or just a team that doesn't suck for a few seasons. The point is, for the first time since the late 90s (and then only briefly), it really looks like the team is on the rise. We don't know where the Royals are going to end up, but their progress is going to be fun to watch.

Happy Thanksgiving everyone. I'm off to the in-law's house in Ohio tomorrow morning and won't be too internet-involved. Expect more free Royals content after the weekend, including a new radio affiliate profile.