The "seed and nursery center of the world" Shenandoah is one of six radio affiliates in Iowa, a state the Royals are only barely remaining viable in. Shenandoah is the rare small city that straddles two counties, in this case Fremont and Page counties, although the vast majority of the city lies in the latter. Both counties have endured substantial population loss during the last century, and are much smaller today than they were in 1900, a remarkable fact considering how much larger the overall population of the country is today. After fifty years of zero growth, around after 1950, true decay set in in southwest Iowa.

Meanwhile, the nation has moved on. In 1900 the population of the U.S. was roughly 76 million, today its nearly four times larger, at 305 million. Despite those sobering statistics, according to the Chamber of Commerce, Shenandoah is a wonderful place to be:

Welcome to Shenandoah, Iowa, the Garden City, a place to shop for a day, visit for a week or live the rest of your life! Shenandoah is a progressive, bustling community full of gardens, entrepreneurs, industry, opportunity, and friendly people. Its unique shops and restaurants have made it the retail hub of southwest Iowa. Shenandoah's lifestyle and appearance have sprouted from a tradition and heritage of garden industries. It's a safe place to raise a family with a top notch school system and is filled with recreation, attractions, and activities for all ages. Its low cost of living, extensive healthcare, and relaxed lifestyle also make it a great place to retire. 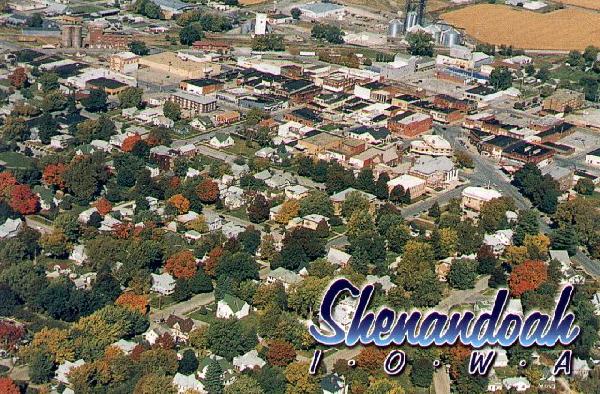 Written during Shenandoah’s glory days, W.L. Kershaw’s 1909 book, The History of Page County notes that, "Shenandoah was originally called Fair Oaks, though for what reason cannot be imagined, as no oak trees or any other kind were found on the site of the town" (381). On August 6, 1870 however Fair Oaks was christened Shenandoah, supposedly because of the similarities between the local scenery and the Shenandoah valley in Virginia, which makes little sense either. The town’s proximity to the Chicago, Quincy & Burlington Railroad was what turned it into a real community, drawing in residents from the rest of the county. At the time of Kershaw’s writing, the founding fathers of Shenandoah were still alive, and their accounts testify to the city’s essential birth as a railroad boomtown, not that they would have chosen to describe it in exactly that way. As one account collected by Kershaw begins, "the child is born. Its name is Shenandoah. The story of this indigenous offspring of the prairie forms an era in the future history and romance of one of the loveliest villages of the west" (383). Interestingly, Kershaw opened his history of Page County with this bombshell,

"it is conceded by historians who have given the subject deep thought and careful research that this country was inhabited by a race of beings distinct from the red man. But that is beyond the province of this work. The men and women who opened this state to civilization had only the red man to dispute their coming and obstruct their progress… (6)

Around downtown Shenandoah lies the Shenandoah Fame Walk, which includes some of Shenandoah’s most famous names, including Don & Phil Everly, aka "The Everly Brothers". Despite a sometimes rocky fraternal relationship, the Everly Brothers charted over twenty six Top 40 singles during their career, including the 1960 number one hit, Cathy’s Clown. Notably, the Everlys also sang backup on Paul Simon’s Graceland album, including on the title track. The Beehive, the E.B. fanclub, is online. A letter to fans from November 2005 reveals a complicated set of disputes, boycotts and confusion. 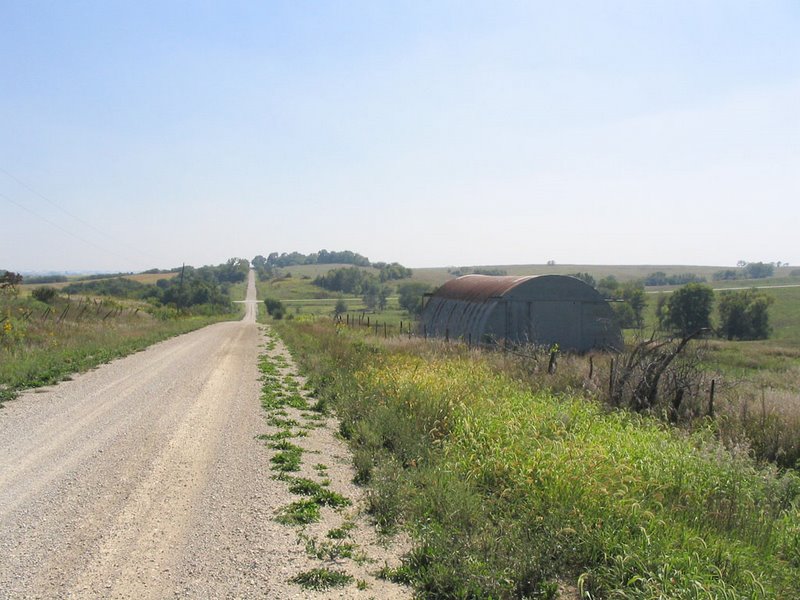 Shenandoah is the proud home of the Mustangs and Fillies, of Shenandoah High School. Since this is Iowa, there’s a mysterious devotion to wrestling, a nearly incomprensible sport to ninety percent of the U.S. population. One of my few good memories from my years at the UI, I believe, were the times I would ironically try to listen to wrestling on the radio (most, if not all, Hawkeye matches had radio coverage) and try to understand even one bit of what was going on. The Shenandoah H.S. webpage is no exception, providing a quite extensive account of the ’07-’08 campaign. Royals Review extends its congratulations to Wes Swygman, Caleb Owens, Cord Willers (yep) and Jake Schubert, the Wrestlers of the Week for Week #8.

So is Shenandoah a Hawkeye or Cyclone town? Well, other than their insane devotion to the Royals, which goes without saying, 960 AM (also the Royals affiliate) was listed as a Cyclone affiliate on a random 2006 webpage I discovered, which makes sense given the vague east/west divide that exists in Iowa. Currently, neither Iowa nor Iowa State has any former Mustangs on their football or basketball rosters. Heck, Iowa only has two native sons on the basketball team, and one of them is the coach’s son, who really grew up in Indiana.

Iowa Western Community College, with an enrollment of over 5,000 and branch campuses in Shenandoah and Clarinda, is the area’s primary source for higher education. At the main campus in Council Bluffs (the Iowa side of the Omaha metro) is the main campus, including the school’s athletic teams, The Reivers. What is a reiver, you ask? A reiver is a river pirate. 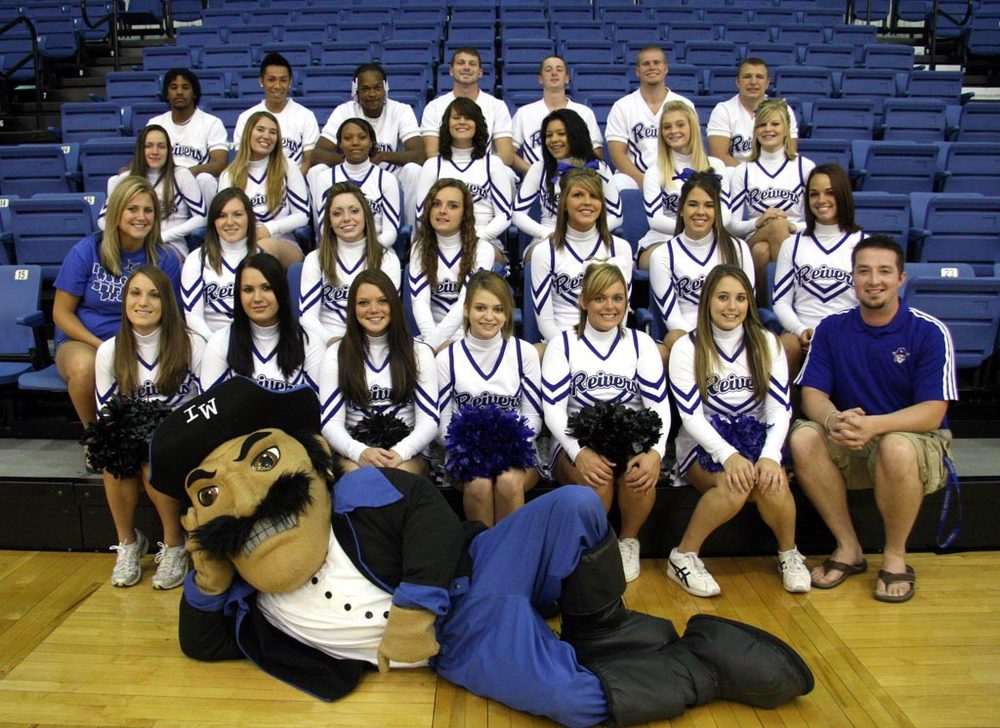 The IWCC Reiver Sprit Squad listens to the Royals constantly on 960 AM when near Shenandoah, which they are with great regularity.

Has Shenandoah ever produced a Major League baseball player? With towns this size, its never a sure thing, despite Iowa’s former status as a relatively populous, nearly entirely white, state during the pre-integration era of baseball. The question comes down to the contested birthplace of Max Marshall (1913-1983) an outfielder who played three seasons with the Reds during the depths of the Second World War. According to the Baseball Cube, Marshall was born in Shenandoah, while Baseball-Reference lists Marshall as being born in Randolph, a smaller town eighteen miles away. There isn’t a clear consensus here and a run through various internet sites (most of whom are getting their information from one another obviously) shows both Randolph and Shenandoah as listed birthplaces. A story in the Des Moines Register about Iowa ballplayers lists Marshall as a Shenandoah boy, and lists an actual person as the source of this information, so we’ll go with that. Marshall was a just slightly below average hitter (career OPS+ 84) who debuted for the Reds as a 28 year old in 1942. His best season was his final one, a 1944 campaign that saw him hit .245/.308/.371. For people who think baseball was always a speed game and that steroids destroyed our national innocence by killing little ball, we note that in 1943 Marshall stole eight bases, which was good for 10th best in the National League. Max Marshall played the game the right way and died in Salem, Oregon in 1983.

Interestingly while on the subject of baseball, during the boom days, Shenandoah had a few minor league teams. In 1903 Shenandoah had an affiliate in the Southwest Iowa League, a class D outfit. Shenandoah’s squad finished 22-14, middle of the pack in the six team league, but disbanded mid-season. Eight years later, a Shenandoah club spent two seasons in the so-called Mink League so named because it was based in Missouri-Nebraska-Iowa-Kansas. The Shenandoah Pin-Rollers competed in the Mink League in 1910 and 1911, finishing third and fourth, respectively, in the six-team league. Fellow future Royals Radio Affiliate Nebraska City was also a member of the league.

The Royals affiliate in Shenandoah, KMA 960 AM is one of the hoary bearded elders of the Royals Radio Network and a fixture in southwestern Iowa since 1925. The station was long linked to Earl May’s various seed ventures in the region and was mentioned in the film version of The Bridges of Madison County. On good nights, KMA can be heard from Topeka, Kansas to Sioux City, Iowa and points in between. Thanks to KMA, despite the ravages of population loss in the region, Shenandoah remains a key affiliate.

May her next hundred years be better than the last.