He's just now 39 and it sure seems like he retired too soon.

On December 18, 1969 in Milwaukee, the world welcomed Joe Randa to the party. Years later, who would have known on that cold day that Randa would achieve a twelve-year baseball career and retire with more career hits (1543) than games played (1522). 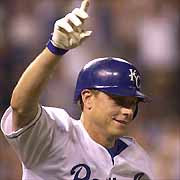 Like so many Royals of the last two decades, Randa was a Royal retread, beginning his career with the team in 1995-6 before returning, after a two team sojourn, for a 1999-2004 run. (For good measure, Randa spent his final season with the Pirates, with whom he'd also played in 1997, giving him two reunion tours in his career.

Back in the early days of this site, I had this to say about Randa's place in team history:

Thats a .288/.340/.428 line as a Royal. During an era in which the K was one of the AL's better hitter's parks (more or less), and during the now wrongly named "steroids era", its not terribly great in its own context. Still, its a production line with its merits, especially given that 3rd base has weirdly become a pretty weak offensive position in the last decade or so.

I think I'm right to assume these numbers are a tad surprising, especially the games played total and the doubles and total bases to a lesser extent. Well, this is what regularity and adequacy can get you, and its worth celebrating in a way.

Its safe to say that Joe Randa is the second best 3rd baseman in Royals history, and is probably one of the 5 best Royals of the last decade or so (say, post-strike era).

You hear that Alex Gordon? And I stand by it, right now Joe Randa is still the greater Royal than you.

As for the part about Randa being one of the five best Royals since 1994, that may be debatable with the continued development of Greinke, three more good seasons from DeJesus and two from Gil Meche & Joakim Soria.

Randa went absolutely bonkers in 1999, hitting .314/.363/.473, providing a key bottom of the order push to strong Royal lineup. It seems amazing to say this now, but at the time it felt like the Royals were truly adept at churning out hitters, and perhaps they were: Febles (when he was good), Damon, Dye, Beltran, Sweeney, Quinn (when he was good) were all on that team after all.

At that season's end, Randa made his only postseason appeareance of his career and made his many Kansas City fans proud. Randa was essentially the only Padre who bothered to show up in a three game washout at the hands of the Cardinals, hitting .364/.417/.455 in twelve plate appearances.

Joe played one more season, the aforementioned second reunion tour, this time in Pittsburgh. He didn't sustain the ride of '05, but he wasn't terrible either, hitting .267/.316/.388. In retrospect it didn't seem strange that he retired at the age of 36, but it does now, especially given his overall (underrated) athleticism.

Randa was always talked about glowingly by Royals fans, who saw him as a down-to-earth guy and a family man, someone who really liked Kansas City and maybe wanted to live there full-time. Perhaps that had something to do with it, perhaps he truly felt he was done, perhaps he was bored or worn out.

Happy Birthday, Joker! To many of us yours was one of the defining markers of the early 00s Royals, a likeable player who never seemed to be part of the problem. May the last year of your thirties treat you well.