Share All sharing options for: A Quick Chat with Baseball America's J.J. Cooper

Last week, deep in the Thanksgiving sinkhole, Baseball America announced their rankings of the Top Ten Royals prospects. (You can read the initial site reaction here and a nice breakdown of various rankings by "doublestix" here.) BA's top three were Moose-Hosmer-Cortes, following the general consensus, while Montgomery rated #4, something of a mild surprise. Internet sensation Kila Ka'aihue slipped into the list at #9, a tad lower than, well, many internet-types, had him.

BA's J.J. Cooper was kind enough to answer a few questions from me. And while, in retorspect, I probably should have delved into some hardcore specific scouting/mechanics type queries, I was feeling more general at the time. No questions about Chris Lubanski either.

RR: You mention the Royals' decade-along failure to find contributing players late in the draft. Do you see any single reason for this or attribute it to any specific organizational problem or blindspot? Or was it just simple bad drafting?

JJC: If you go back to the early 2000's I think it was a combination of both. The Royals had some bad drafts, and then failed to develop the players they drafted, which is often a forgotten piece to the puzzle. In the early '00s, deciding to draft Colt Griffin and Roscoe Crosby was obviously a bad decision. 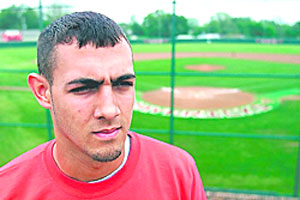 RR: The Royals added a seventh minor league affiliate a few years ago. Was it worth it to do so?

JJC: It sure can't hurt. By having seven affiliates, the Royals get to take a look at another 25-30 players that other teams have to cut. Most of those players will prove over the next year or two that they don't deserve to stick around, but if one of them succeeds because he got a third or fourth chance, than it makes it worth the investment. It does cost some money, but in the grand scheme of things it's a pretty inexpensive way to focus on development.

RR: Were the Royals right to acquire Mike Jacobs from Florida or should some combination of Ryan Shealy and Kila Ka'aihue performed adequately in 2008?

JJC: Personally, I'm not a big fan of the trade, but then the Royals don't check with me before making any moves. But then, I don't really have to worry about how many tickets Kansas City sells this year either. To me the Royals have to make moves with the long-term goal of being a playoff contender in 2011-2012 in mind. Making a move that helps win two or three games in 2009 doesn't do a lot for that goal, especially if it's a player who will likely be long gone by then. So in my mind, giving Shealy/Ka'aihue a chance to prove they're either something or not part of the long-term answer is more important than Jacobs hitting 25-30 homers with a .300 OBP. Maybe Ka'aihue's improvement in 2008 is a sign that he's got it all together now that he's hitting on healthy knees. If that's the case, with his plate discipline, he'll likely be more productive than Jacobs over the next 2-3 years. Of course, it's also possible that 2008 was a fluke and he's the hitter who hadn't slugged over .500 in his first six pro seasons. But by giving him 200 at-bats, Kansas City could figure that out. But I'm realistic enough to know that the Royals can't sell another long rebuilding project to fans who have heard that same refrain for over a decade now, so moves are made to get to .500 in 2009. It's hard to focus on 2011-2012 when you have to prove to the fans and the ownership that things are getting better quickly.

RR: How should Royals fans feel about the Luke Hochevar pick from a few years ago?

JJC: I'm assuming most Royals fans are a little disappointed that Hochevar hasn't emerged as a star by now. That's definitely true, but then, the next two college pitchers taken after him in 2006 have been worse (Greg Reynolds and Brad Lincoln), and Andrew Miller, the consensus No. 1 talent, hasn't set the world on fire either. The only sure-bet star taken in the top five was Evan Longoria, and as much as teams talk about taking the best available talent, the Royals weren' going to draft a college 3B a year after drafting Alex Gordon. Hochevar should be a solid middle of the rotation starter if he continues to improve, which is a decent return, even for a No. 1 pick. 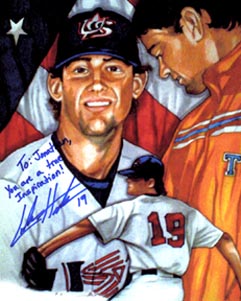 RR: A late surge by the Royals dropped their 2009 Draft Slot from around fifth or sixth to twelfth. Is this going to come back to haunt the team?

JJC: If they keep drafting like they did last year, no. Drafting high is a big help--just ask the Rays--but the Royals willingness to spend money allowed them to nab Mike Montgomery, Tim Melville and several other top talents last year after the first round. It wouldn't surprise me if they did that again this year.

RR: A few years ago, the Royals were possibly the least-talented/most-hopeless organization in baseball. Who holds that title now?

JJC: Hmmm. I'd have to pick the Nationals. Their farm system is pretty barren, the big league team is poor and they have an almost non-existent fan base. That's a tough trifecta to recover from.

RR: Overall, how would you grade Dayton Moore's rebuild of the farm system thus far?

JJC: They seem to be in better shape now than they were three or four years ago. This team really needs Alex Gordon and Billy Butler to emerge as the lineup cornerstones they were expected to be, and the farm system is still weak at the upper levels, but if the young talent that's should hit low and high Class A this year continues to improve, the Royals could have a Top 10 farm system next season. Now not all of those guys will pan out, but if just four or five of the mutlitude of young arms pull it all together, the Royals will be in a lot better shape in 2011 and 2012.

At the big league level, Moore has shown that he can build bullpens, which is something that had been a problem for years in K.C. That's not everything, but it is something, and it's a strength that has allowed him to deal bullpen arms for help elsewhere.

Thanks to J.J. for his insights.

Thoughts? You agree that the Nats are the worst organization in the game right now? Should the Royals have bitten the bullet positionally and taken Longoria? Too early to tell?