For most Royals fans, the question isn't whether Joakim Soria should become starting pitcher, it is when and how.  He's got multiple plus pitches, good control and sound mechanics.  I am in that majority and I think the Royals should use Soria as a reliever and spot starter this year to get him up to about 95-100 IP.  Then, in 2009, he could spend most of the season as a starter, getting his IP up to about 130. 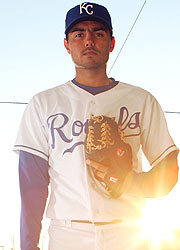 Soria's best tool is the golden aura that surrounds him

However, the "experts," commentators and analysts don't necessarily agree that Soria should ever become a starting pitcher.  Here are a few comments I've run accross on these lines:

BL (Bozeman): The notion of moving Joakim Soria to the rotation... do it now, do it never, or do it later?

Christina Kahrl: He's had some problems in the past, and when you're as good as he's been initially in a relief role, as Jonathan Papelbon demonstrates, it becomes very hard to move past the automatic instinct to not fix what isn't broken.  --  February 28, 2008 from a Baseball Prospectus chat session

Huh?  What problems?  His shoulder inflammation that put him on one 15-day DL stint?  I haven't read anyone say that this was significant or worrisome.  And shouldn't they move past the "automatic instinct"?  This seems to fly in the face of the more common sabermetric analysis that a starting pitching is much more valuable than relief pitching, regardless of role.

Joe Posnanski: Joakim Soria is the closer - and he's fun to watch. I was messaging with Rob [Neyer] about this: I cannot remember a young pitcher who started out his career as a closer and then became a good major league starter. I bring this up because the Royals keep talking about making him a starter down the road ... I don't think so. Seems to me the decision is made.

Rich Lederer: Jonathan Papelbon? Oh, that's right. That only last a couple of starts in spring training last year. Hmmm... I can think of some pretty good pitchers who started as relievers (Orel Hershiser, Fergie Jenkins, Pedro Martinez, Dave Stewart, Bob Welch, and David Wells to name an Antonio Alfonseca handful), but I guess it would be unfair to call them "closers." I don't know, Joe, you might be on to something here. The closest one that I can think of would be Charlie Hough. As a knuckleballer, maybe he doesn't qualify. Or maybe you don't think he was a "good major league pitcher?"

Joe Posnanski: Well, Charlie Hough doesn't qualify in my mind because he wasn't especially young when he came up as a closer (he was 28 in his first full season) and while he did become a good starter at 34, I'm suspecting that's probably not the career arc the Royals are hoping for with Soria. Knuckleballers are indeed a whole other thing. And yes, the Cardinals are trying to do it with Braden Looper, but you couldn't call that a success story yet. ... The closest I've been able to find is actually Scott Garrelts, who wasn't exactly the closer with the Giants -- he was sort of a co-closer with Craig Lefferts -- and then he had one really good year as a starter, another so-so year, and then he got hurt and was done. Again, not exactly the model I think anyone is hoping for. -- March 11, 2008 from BaseballAnalysts.com

Joe, I like you but sometimes, I don't know...  Is he trying to say that because Soria was a closer in his rookie season that we should expect that he'll never be a good starting pitcher?  First, that's silly and unsupported.  Many good starting pitchers started their MLB careers as relievers.  In addition to those named above, Johan Santana, Kelvim Escobar, and Curt Schilling all started as relievers and turned into very good starting pitchers. Second, he started as a reliever because he was a Rule 5 acquisition.  If he had stayed in the Padres system, they would have developed him as a starter.  If the Royals had the luxury of keeping him in the minors, they would have used him as a starter.  He was used as a reliever in his rookie season out of the necessity caused by the Rule 5 draft acquisition.  Third, he was a closer as a rookie (for part of the season) because of injury to Dotel and because he's so damn good.  None of the above is a sound argument for him never becoming a good starting pitcher.

While I don't think they have made up their mind on Soria's future, the Royals organization sees him as a possible/likely future starter.

But clearly they think the time for Soria to start is not now.

Joakim Soria, the Rule 5 Draft steal from the Padres, stepped in brilliantly for Octavio Dotel, who was first injured and later traded. Soria saved 17 games in 21 chances as a rookie and is looked upon as the full-time closer this year. There's been scant consideration given of switching him to a starter.

"We haven't even discussed that because we all like him as a closer so much," manager Trey Hillman said. "If we were really serious about doing that, we'd have been more aggressive about going after someone to fill that closing role." -- February 6, 2008 KCRoyals.com

The Royals situation with Soria is mirrored by the Yankees quandry with Joba Chamberlain.  He dominated as a reliever and scouts think he has the stuff to be a very successful starting pitcher.  Many commentators think the Yankees should keep in the bullpen and groom him to be Mariano Rivera's successor as closer.

Chris Russo: Why mess around with a sure thing?
Mike Francesa: Why has everyone come to the conclusion that he's a better pitcher as a starter than as a reliever?
Sweeny Murti: Because of his tools including multiple plus pitches
Mike Francesa: But the only success he's shown in the majors is as a reliever...The idea that that job [setup man and heir to Rivera as the closer] isn't more important [than starting] then no one has paid attention to what has gone on here for the last decade or so...The Red Sox won last year more for any other reason than that Okajima and Papelbon were the best bullpen in baseball. -- March 5, 2008 WFAN Radio

Russo and Francesa aren't the average sports talk radio guys.  They aren't just reactionary guys trying to stir things up.  They are intelligent and thoughtful in their analysis, although definitely not at all progressive.  I think they and those that agree with them are way off.  If he can be a good starting pitcher, he's worth a lot more to his team than a very good setup man or closer.  The numbers are pretty clear on that.

Our friends at Baseball Prospectus disagree Russo and Francesa and their analysis of Chamberlain.

I worry about a Dave Righetti scenario here. It's very easy to imagine Chamberlain pitching well in the pen and the Yankees saying, "We don't want to mess with success." To invoke Nate [Silver] for about the umpteenth time this chat, last year he did a good bit of analysis (on Unfiltered, I think) trying to find the break-even point for Jon Papelbon-as-starter vs. as-reliever. We need to ask him to do that again for Chamberlain. My guess is that the threshold for the reliever argument has got to be pretty high -- Joba has to be spectacularly good in the pen, not just really good -- to justify giving up the high-side expectations of what he can do in the rotation. --  February 27, 2008 Steven Goldman Baseball Prospectus

So with Chamberlain, the Yankees can afford to waste him in the bullpen.  But with Soria, they should "fix what isn't broken."  Seems like a contradition.  But of course BP, sabermetricians and baseball analysis isn't one big monolith with only one opinion and perspective.  Perhaps others at BP disagree with Kahrl -- who, in my opinion, is usually dismissive of the Royals.  But it is clear that some, perhaps many, commentators think Soria should stay in the bullpen indefinitely.

What do you think?  Is there anything to the theory that Soria will pitch best as a closer, so let's just keep him in that role?  Can we expect him to succeed as a starting pitcher?  Should the Royals give him a shot in the rotation?  And if so, when and how?