The Royals Radio Network is comprised of over eighty affiliates and stretches across seven states. In this recurring series (previous features listed below at the bottom of the page) Royals Review attempts to give each affiliate its proper airing, celebrating the regional reach and heritage of Royals baseball. In a sporting era corrupted by the endless quest for the big money, baseball on the radio is a decidedly low-stakes, low-tech venture. Let it always lay hidden like a strength in the backyards of the mind.

Somewhat surprisingly, Tulsa, Oklahoma is one of the easiest places in the United States to listen to a Royals game on the radio, at least at first glance. According to the team website, the Royals have a four station presence in Tulsa: 1550 KYAL-AM, 1490 KBIX-AM, 1470 KGND-AM, and 97.1 FM. At any given moment, like half the radio stations in Tulsa are broadcasting the Royals, this is wonderful! Unfortunately, that’s not quite the case. First, 1490 KBIX-AM is actually a Muskogee station (does this mean they deserve a separate Radio Affiliate Profile? Yes.) and Muskogee is fifty miles away. Similarly, 1470 KGND-AM is based in Vinita, which is about 65 miles northeast of Tulsa, an affiliate that especially dedicated readers will also note has already been profiled here. Second, 1550 KYAL-AM and 97.1 FM in Tulsa are actually the same station, "The Sports Animal". Thus, from four stations on the team website, we can whittle it down to something like 1.5, depending on how you’d like to divvy out partial credit. Presence on The Sports Animal is huge however, as 97.1 FM can be heard over a huge area in Eastern Oklahoma. As far as I can tell, the Animal’s affiliates in Oklahoma City and elsewhere do not carry Royals baseball however.

The team’s desire (or rather their marketing and public relations department’s desires) to advertise a strong presence in Tulsa is understandable, considering that it is one of the largest cities in the network. In terms of pure, city-of population in fact, Tulsa is not much smaller than Kansas City itself.

Sadly, many of these cities are far from Royal strongholds, and really, of the list above, the only places where the Royals are clearly number one, aside from Kansas City of course, are: Lincoln & Omaha and Topeka & Wichita. From what I’ve seen and heard, Tulsa is Cardinals country (there are two Redbird Radio Affiliates there), and perhaps the far southeastern outpost of Cardinal Nation. For whatever reason, the Cards have remained strong along I-44, claiming territory in Joplin and Springfield as well. All of these places however, are actually closer to Kansas City, and in Tulsa’s case, it isn’t even close: Kansas City is about 244 miles, but a drive to the Lou is 395. For this reason, if the Royals ever turn the corner and return to prominence, we could see Tulsa emerge as a rising seat of Royals fandom, especially with the radio presence the team has continually planting seeds. Other than being on television and being exclusively on the radio, literally, sixty years ago, there isn’t much reason why the Cardinals are so strong in this region, which can’t be said for, say, Des Moines, which has the Iowa Cubs. Oh, make no mistake, at some point, it’s gonna get real in Tulsa, especially if the notoriously fickle Fox Sports/Cox Cable programmers make a few changes. And when it does, Royals Review will be there. 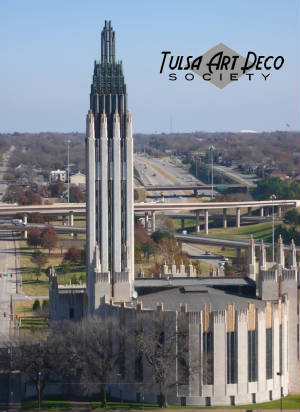 Since the early nineteenth century there have been various towns and settlements, of varying degrees of relevance and likely veracity, have existed around the present day site of Tulsa, but it was only around 1901, when oil was discovered, that the Tulsa we know today was born. Oil fueled the growth of Tulsa in the early decades of the last century, sending money and people into northeastern Oklahoma in unprecedented numbers. Because of Tulsa’s rapid growth at a particular time, the city is noted for its extremely high concentration of Art Deco (for more info click here and here) inspired buildings.

Art Deco isn’t Tulsa’s only architectural claim to fame however, as the campus of Oral Roberts University is a massive artifact of unique late-modernist/post-modernist/futuristic architecture. Unfortunately, forty years on, the buildings are starting to show their age. Considering the past year that ORU has had in the headlines, perhaps its best that we focus on the buildings. Oral Roberts counts as her notable alumni, disgraced minister Ted Haggard (who is definitely not gay), Kathie Lee Gifford and beloved former Royal (and Brave!) Keith Lockhart. According to Royals insiders, Dayton Moore is highly impressed by Lockhart’s character and .319 career OBP, and that he is currently being groomed to become the next team hitting coach. Lockhart always played the game the right way.

However, we should not delimit our discussion of Tulsa’s colleges and universities to Oral Roberts, especially not when the aptly named University of Tulsa is also in the mix. Tulsa – the school, not the city – is one of those sneaky private schools that sounds like it should be a 40,000 student commuter school with fifty campuses, but is actually a tiny private school that was simply lucky enough to snag "University of ____" before anyone else claimed it. (See also The University of Dallas and the University of Tampa.) With an enrollment of 4100 students and an unclear level of affiliation with the Presbyterian Church, the University of Tulsa boasts a student to faculty ratio of 11 to 1 and an average SAT score of 1270. Tulsa is also the home of the James Joyce Quarterly, which surprisingly still exists, considering that for years now the Joyce Estate has made it increasingly difficult to publish anything on their claim to fame. This very matter is actually discussed in the current issue of the JJQ, in the editorial notes of Sean Latham:

The Joyce world was abuzz this summer with word that Carol Shloss launched a lawsuit against the Joyce Estate in the United States District Court in San Francisco. Nearly simultaneously, Stephen Joyce himself was the subject this summer of a Bloomsday profile in the New Yorker entitled "The Injustice Collector" (16 June 2006), which provides a rich history of the Estate’s various feuds with scholars as well as its aggressive defense of the family’s privacy and intellectual property. The lawsuit, which is discussed in the New Yorker piece, arises directly from a digital edition of Shloss’s Lucia Joyce: To Dance in the "Wake" in which all of the material removed from the print edition at the behest of the Estate has been restored. Access to this text remains closed and protected by password, but it provides Shloss with grounds to challenge preemptively the Estate’s claims of copyright infringement. Shloss is pursuing the suit with the support of the Stanford Law School Cyberlaw Clinic and Center for Internet and Society and counts among her attorneys Lawrence Lessig, David Olson, and former JJQ editor Bob Spoo.

In her complaint, Shloss not only seeks permission to publish the portions of her original text that had been suppressed, but also asks the court to find that the Joyce Estate has systematically abused its copyrights by unfairly withholding materials from publication and improperly representing the extent of its rights. As a result, the potential consequences of this suit extend far beyond the limits of the Lucia biography and go to the heart of both the "fair use" exemption to copyright as well as the past actions and behavior of the Joyce Estate and its agents. We should all, therefore, be watching these proceedings with care and interest, since it promises to have a significant impact not only on Joyce studies but on all of us who work with copyrighted materials. It may take years for a final decision to be reached, and I will keep you apprised of events as they develop.

Finally, an interesting U of Tulsa curiosity is that although it is, in fact, the University of Tulsa, it seems to refer to itself as TU, as evidenced in this fact sheet and football game cheer. So now we know that KU isn’t the only school that does that.

Tulsa isn’t all oil, cool buildings and schools however, as the capital of the Green Country also boasts minor league baseball, a NBDL squad and arena football. Of course, we shall make no mention of the Tulsa Drillers (ok, just did) a longtime Texas affiliate which is now part of the Colorado chain. The Tulsa Talons are the real champs, winners of the 2007 af2 (note: I did not capitalize as that seems to be the afl2 self-preference) title. This is no mean achievement, as there are something like 400 af2 teams. Insert Napoleon Dynamite reference now: Do the chickens have large talons?

As for the Drillers, well… their Dance Team has a myspace page. They have also been known to stand near Jason Kidd and in general proximity to an unknown man famous in the Tulsa area for his glowing, seizure inducing neon yellow jacket. 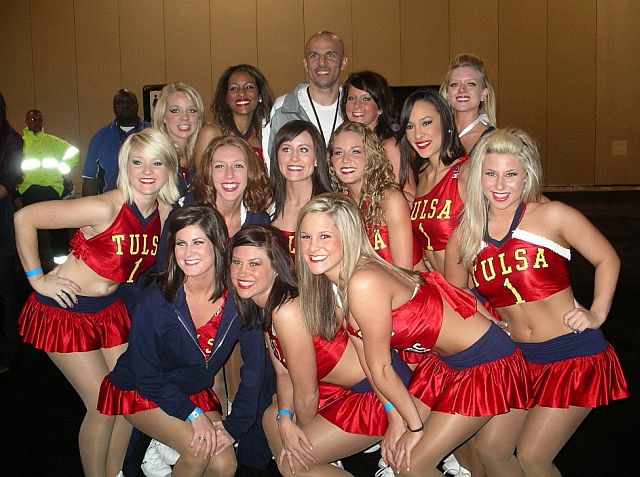 Members of the Tulsa 66ers Dance Team listen to the Royals constantly on The Sports Animal.

A huge number of Major League baseball players have been born in Tulsa, although interestingly not many have been players of much prominence, unless you consider randoms like Charlie O’Brien and Steve Sparks (and those were some of the bigger names) prominent players. Regarding managers however, Tulsa’s progeny is a little stouter, as beloved current Braves manager Bobby Cox entered this world on May 21, 1941 – while the US was still sitting out World War II, true Greatest Generations don’t fight Nazis until the last possible moment – in Tulsa. Cox has now managed the Braves for so long it’s hard to remember that he ever sat in a Blue Jays dugout weirdly wearing a full uniform, but he did, between 1982 and 1985. Looking at his Baseball Reference page, it appears that today, Cox will manage his 4100th career game. Weird.

May the Cox/Braves connection inspire the Royals to aggressively sure up the support of northeastern Oklahoma and truly capture the devotion of the Sooner State.