The Royals Radio Network is comprised of over eighty affiliates and stretches across seven states. In this recurring series (previous features listed below at the bottom of the page) Royals Review attempts to give each affiliate its proper airing, celebrating the regional reach and heritage of Royals baseball. In a sporting era corrupted by the endless quest for the big money, baseball on the radio is a decidedly low-stakes, low-tech venture. Let it always lay hidden like a strength in the backyards of the mind.

The seat of Polk County – one of twelve Polk Counties in the U.S. – Missouri, Bolivar is home to over 9,000 proud members of the Springfield metropolitan area. In 1990, Bolivar only claimed 6,845 people, pretty remarkable growth for a small town, absent the real possibility that a prison has been built nearby. Despite the growth of Bolivar, Polk County remains one of Missouri’s leading producers of cattle and turkey.

Bolivar was named for Bolivar, Tennessee, which was originally named for legendary South American revolutionary Simon Bolivar (shocking to imagine something like that now, in the lapel pin flag era, no?) giving it a curious lineage. Nevertheless, for a remarkably long time the citizens of Bolivar remained committed to the promotion of their town’s name as evocative of some pan-American commitment to democracy. Bolivar High School, incidentally, is home to the Liberators. On July 4, 1948, Bolivar hosted both President Harry Truman and President Romulo Gallegos of Venezuela (a fascinating figure and a renowned novelist) in a ceremony dedicating a statue of the man himself, Bolivar. Truman was also presented with a bust of Bolivar from the Venezuelans. Amazingly, there is also an incredibly cool home movie of this ceremony on youtube, perhaps tellingly, at least one commenter is disputing the fact that Bolivar is named for Bolivar… Yes, it would be much better to claim to be named merely after a small town in Tennessee and not a major historical figure like Bolivar. God Bless the twenty-first century. 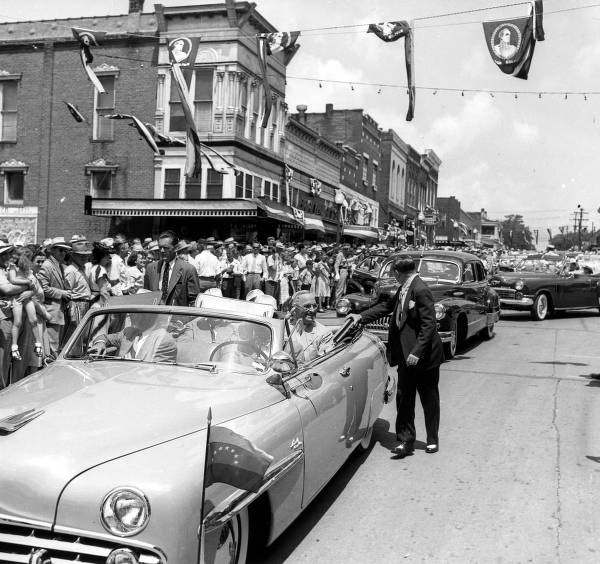 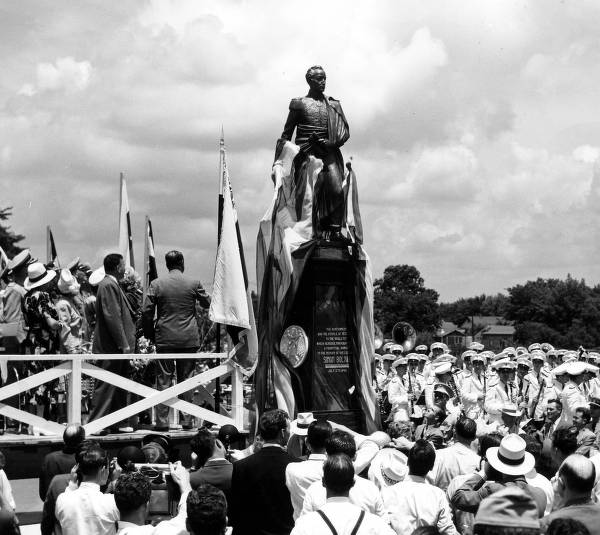 Truman of course, would win Missouri by a wide margin that year, en route to his surprising re-election.

According to the Chamber of Commerce:

Bolivar is a city of about 10,000 people located on Highway 13 between Kansas City and Springfield, Missouri. It is surrounded by recreational lake areas that furnish good fishing and all types of wild game. Bolivar also has an excellent and plentiful work force with the type of people that it takes to make manufacturing and business successful.

We of the Bolivar area are proud of our good schools, churches, health care facilities, our university, and our strong business and farming community.

Unfortunately, the Bolivar Chamber of Commerce has been snuggling up to the Cardinal organization in recent years, putting together a string of Bolivar Days during Springfield Cardinal games. This year’s Bolivar Day is scheduled for August 14th, and will feature numerous Bolivar celebrities. The Chamber is even selling Bolivar Day t-shirts. I encourage all Royals fans to sabotage this hideous display.

Since 1879 Bolivar has been home to Southwest Baptist University, with satellite campuses in Mountain View, Salem and Springfield. With an enrollment of around 3,600 and 1,600 at the Bolivar campus, SBU offers 45 undergraduate programs, ranging from Keyboard/Church Music to Criminal Justice. A program on Science and the Christian Faith is also offered. SBU’s sports heroes are the Bobcats, (SBU blog here) proud members of the MIAA along with other regional schools like, UCM, Emporia State, Pittsburg State, Washburn, etc. This past May tryouts were held to determine the 2008-9 Spirit Squad, which included a fitness test:

• Fitness Test - Please bring appropriate tennis shoes and attire for this portion of the tryout. The fitness test is pass/fail, and you must pass all three parts in order to continue on in the selection process. The fitness test will include:

Thanks to standards like those, the SBU Spirit Squad was named National Champions in 2007. 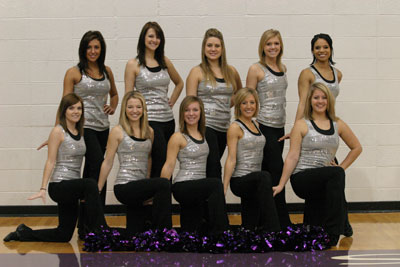 Members of the SBU Spirit Squad listen to the Royals constantly on KYOO-AM 1200.

The Bolivar Herald-Free Press is one of the oldest continuous businesses in Polk County and is published twice-weekly. Despite Bolivar’s status as a proud Royals Radio Affiliate, a quick scan of the Sports section did not find much coverage of the boys in blue. Bolivar High School, yes. Even practice. While no one born in Bolivar has ever made the Major Leagues, the town currently claims two members of the Missouri Tigers football squad, walk on QB Luther Roweton and Caleb Medley, a tight end. For what it's worth, four Major Leaguers, including current players Carlos Silva and Enrique Gonzalez, were born in Bolivar Venezuela. I have no doubt that Silva has made a pilgrimage to Bolivar, Mo during one of his weekends in KC.

Other than the Hospital and the Bolivar School District, the largest employer in town is the Wal-Mart Supercenter, which claims 380 employees, some 70 more than work for SBU. Tracker Marine, a boat manufacturer employs 275 people, and, interestingly enough, an artifical flower maker, Teters Floral Products (website here), employs 200. Sadly, as the company FAQ explains, Teters (doesn’t seem to be "Teter’s" in their literature) only sells business-to-business. If you want to buy one of their Christmas displays or a cemetery decoration or whatever, they will help you locate a retailer near you that offers their products, but please do not try to buy directly from them.

The Bolivar affiliate remains something of a dream, the manifestation of lofty hopes that the cynics of history do not believe are possible. As Bolivar himself is reported to have said, "the three greatest fools in history have been Jesus Christ, Don Quixote… and me". Located deep within the heart of the Cardinals’ I-44 corridor stronghold, the promise of Royals baseball on KYOO-AM and FM (1200 AM & 99.1 FM) is a validation of the spirit of man. Despite the Chamber of Commerce’s red-stained hands of greed, the People of Bolivar are still free to choose. Cardinals or Royals.

"A republican government: that is what Venezuela…should have. Its principles should be the sovereignty of the people, division of powers, civil liberty, prohibition of slavery and the abolition of monarchy and privileges. We need equality to recast, so to speak, into a single whole, the classes of men, political opinions and political custom."