The Royals Radio Network is comprised of over eighty affiliates and stretches across seven states. In this recurring series (previous features listed below at the bottom of the page) Royals Review attempts to give each affiliate its proper airing, celebrating the regional reach and heritage of Royals baseball. In an era defined by the endless quest for the big money, baseball on the radio is a decidedly low-stakes, low-tech venture. Let it always lay hidden like a strength in the backyards of the mind.

St. Joseph, about an hour's drive north of Kansas City on the mighty Missouri, is not surprisingly one of the Royals' strongest radio affiliates not directly in the Kansas City metro area. Then again, considering St. Joe is barely farther from KCI than many parts of Kansas City... With a population of around 73,000 (metro area ~123,000) St. Joe is a crucial affiliate in the quiet corner of northwestern Missouri, which unlike the treacherous environs of the southwest (I'm looking squarely at you Joplin and Springfield) has remained, more or less, Royal blue. In fact, a large number of this own site's regular readers are from St. Joe, which makes me somewhat nervous to be writing about it.

In earlier installments of this series I've tried to talk about the unique character of small cities like Enid, Oklahoma. St. Joe, though larger than Enid, certainly fits that profile. Unfortunately, I have never been to St. Joe, and am not a huge fan of northern Missouri generally (see, Trenton), so I sincerely invite you to comment with your impressions of St. Joe's general vibe.

Founded in 1843, like a number of Royals Radio Affiliates, St. Joseph's population peaked long ago, in this case around 1900, when she topped 100,000. By 1910 however, the population was down to 77,000 (what the hell happened?), a figure that St. Joe has hovered around for the last hundred years. In particular, both the 1970s and 1990s saw the city lose substantial chunks of population, canceling out the modest gains made earlier.

As even wikipedia will tell you, the two major talking points of St. Joseph's early history are 1) the town's status as an end-point on the Pony Express and 2) the demise of Jesse James, who was killed in town in 1882. Oddly enough, Betty Dorsett Duke, of Trey Hillman's pseudo-hometown of Liberty Hill, Texas, claims that Jesse James actually lived and died in Texas. This, however, is sorta a Texas thing, as the town of Hico, Texas, has long claimed that Billy the Kid also lived and then died there as well.

As for the Pony Express angle, St. Joe boasts the Pony Express Museum, which was renovated in 1993, which may have also been the last year the Royals were a legitimately good baseball team. The Pony Express Museum not only offers group tours and a wealth of P.E. history, but also a Community Room available for public use. If I was going to marry a St. Joe girl, I'd like to have the wedding reception right there. Although, since the Pony Express only lasted like two years, maybe that would be bad luck. Or maybe good luck, depending on the girl. Or me.

While Springfield, in many ways a similar "out-state city" has continued to experience occasional periods of growth, this has not been the case with St. Joe, which in the 1990s actually grew at a lower rate than Joplin, Cape Girardeau, Columbia or Springfield. According to  Lawrence H. Larsen in A History of Missouri, Vol. 6. (link) it has been shifts in the agribusiness market which have hurt St. Joe. Still, according to the Chamber of Commerce, the getting should be good,

St. Joseph's favorable tax structure translates directly into industry profitability, and the City of St. Joseph and Buchanan County provide a pro-business environment with attractive tax rates and competitive incentives for growing companies. Undoubtedly one of the city’s most valuable resources is the people. St. Joseph workers have a reputation for hard work, high productivity and low absenteeism and turnover.

You know which city's workers have a reputation of lazy work and non-stop absenteeism? Well do I even have to say it? Actually, I think somewhere in Northern Ireland is the worst. You thought I was setting up a Joplin joke there, didn't you?

For more relevant stats on St. Joe and how it compares to other U.S. Cities, the CNN/Money breakdown is useful. (Can a local let us know how St. Joe has low air-quality?)

St. Joe's largest local employer is the hospital, but the downtown skyline is dominated by the Hillyard Building, as seen above. Hillyard Industries - The Cleaning Resource, founded in St. Joseph in 1907, still produces a variety of cleaning supplies, offers management seminars at Hillyard University and now offers a variety of green cleaning products. Can disinfectants really be green you ask? Yes, yes they can.  (Buchanan County, by the way, was one of nine Missouri counties that went for Obama in November, by a slim 47 vote margin.)

For a thoughtful account of St. Joseph, as well as a number of nice photographs, click here. By way of warning, I should say that the author sees similarities to St. Louis,

"St. Jo has many familiar faces: the old industrial section next to the river, the (now) flooding waterfront park, the old warehouse area, the nearly vacant downtown, the "it will save downtown" arena, parking garage and hotel combination, numerous older residential areas, new suburban homes and auto-centric chain shopping areas with mid to big boxes." 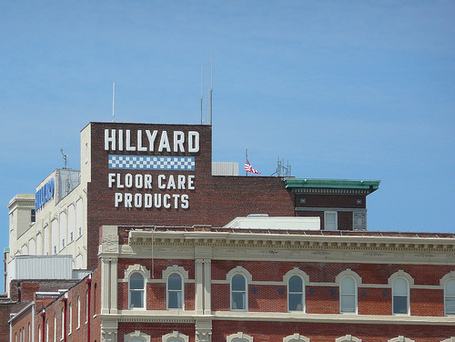 St. Joseph is in an interesting position media-wise, large enough to have a local ABC Television Affiliate, a strong daily paper with good Royals coverage from R.J. Cooper, but perhaps a little too close to Kansas City to extend beyond that. St. Joe is roughly the 179th largest television market in the United States. As a reference point, here are the others in Missouri: St. Louis (20th), K.C. (27th), Springfield (130th) (74th), Jefferson City (131st), Joplin (156th). In addition to, of course, the radio, St. Joe also has its own CW & TBN affiliates and St. Joe Now, a cable channel.

Missouri Western State University has called St. Joseph home since 1915, and is home to 5,300 undergraduate students. M.W.S.U. offers over 90 majors. One of my favorite campus clubs is the Alchemist Club, though they seem more interested in networking than in finding the Philosopher's Stone. The odds are, the Matrix Club has already found it. M.W.S.U. is represented on the fields of sport by the Griffins, and those Griffins are supported by a full complement of dance (the Mystics) and cheer teams. 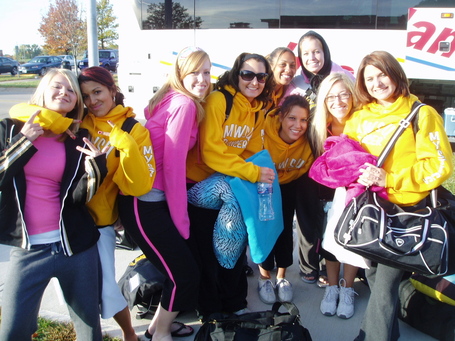 The 2007 MWSU Mystics listened to the Royals CONSTANTLY on 680 AM. Never moreso than on their trip to St. Louis, pictured here. When they left KFEQ's signal area, the girl in the pink doing the hand signs pulled out a printed list of radio affiliates and helped the bus driver find the best station to find Denny.

A number of Major League baseball players have been born in St. Joseph. Byron Browne is probably the most successful of these five or six players, appearing in 349 games as an outfielder from 1965-72. A career 99 OPS+ hitter, Browne was an alum of MWSU and led the National League in strikeouts with 143 in 1966. However, hardcore Royals fans may remember Jim Wright (stats) a right-handed pitcher who appeared in 24 games with the Royals in 1981 & 1982. Mostly a reliever, Wright's 4.04 ERA was just a tick above the 3.74 league average. After the 1982 season, Wright was traded to the Cubs for Mike King, and it appears that neither player appeared in the Majors ever again (actually, King never had). Sadly, a number of former players have also died in St. Joe. For whatever reason, they have almost all been obscure old-time players like Bill Bishop (appeared in two games in 1920), Oad Swigart and Frosty Thomas (two games played, in 1905).

Other than Jesse James and ex-Royal Jim Wright, St. Joe's most famous son is Walter Cronkite, born in St. Joe in 1916 (its the same old thing, since 1916, in your head, in your head...). Beyond Cronkite (still with us, which is cool) the city can claim a truly impressive musical fatherhood. Steve Walsh of Kansas grew up in St. Joe, as did Eminem, aka Marshal Mathers, who was born in St. Joe as part of a nomadic childhood. In 2003, a parade for Eminem was held in St. Joe, although the rapper did not attend. Aspiring R&B star Kelli Pyle (relationship to Howard unknown) is also a child of the Joe. 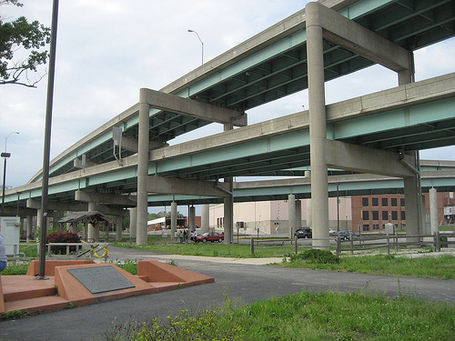 I'm gonna rent myself a house, in the shade of the freeway...

Unlike, sadly perhaps, the majority of Royals Radio Affiliates, the boys in blue & white are the undisputed first team in St. Joe. Located north, rather than east of KC, there's a nice, though far from unimpeachable boundary from Cardinal Nation (they have a radio affiliate in St. Joe as well) and the city is more than close enough for an easy day-trip down to the K for a game. Despite a number of alternating down-decades followed by mini-periods of stability, according to some, the future of St. Joe looks bright. May her fortunes, along with those of the Royals, continue to rise.