Fordyce, the county seat of Dallas County, is the southernmost affiliate in the Royals Radio Network. Don't believe the incredibly inaccurate map on the Royals' website, Fordyce is in southern Arkansas. About 80 miles south of Little Rock, Fordyce is closer to both Dallas (312 miles) and Houston (386 miles) than she is to Kansas City, the home of our Royals. Fordyce is over a thousand miles south of the latitude of Belle Fourche, South Dakota, the northernmost affiliate.

Fordyce was named in 1882 for, get this... a railroad executive. That is noteworthy. I've never heard of a small town west of the Mississippi being named in such a way. Fordyce's population peaked around 1980, when it was over 5,000, but like the rest of Dallas County, Fordyce has been declining in population for the last twenty years.

Arkansas is typically considered a Cardinals state, and St. Louis has fourteen affiliates there. Perhaps because of their connection to Wal-Mart, the Royals have been trying to expand their presence in Arkansas for a number of years now, with mixed success. In 2008, the Royals moved their AA club from Wichita, Kansas, to Springdale, Arkansas. In some ways this was just your typical follow-the-stadium-money cash grab. However, at least symbolically, it was another sign of the Royals' efforts at a southern strategy. Currently, there are six or seven (depending on how you parse it) radio affiliates in the state. By comparison, in the glory days of the Network, the early 1980s, the Royals had only one affiliate in the Gem State.

Fordyce's most famous former resident is legendary Alabama football coach Paul "Bear" Bryant. Bryant, grew up in nearby Moro Bottom (sometimes Moro Bottoms) and moved to Fordyce with his family in 1924 at the age of 11. Bryant attended high school in Fordyce, where he helped the 1930 Fordyce Red Bugs win the State Championship. It was in Fordyce that Paul got his nickname. At the Lyric Theater, in 1927, the owner offered a dollar to anyone who would fight a bear. A dollar in 1920s Arkansas was worth seven hundred dollars in today's money, so it made sense for Bryant to accept the offer. After winning the dollar prize, Bryant moved his family into the largest house in town. With the remaining change, he sent three of his sisters to vocational school and set up his brother with a pig farm in Arkadelphia. 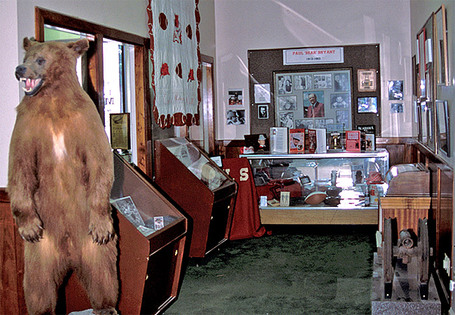 The Bear Bryant display in the Dallas County Museum.

Fame would find its way to Fordyce again. Keith Richards rolled through town during the Rolling Stones' 1975 Tour of the Americas and left his predictable mark on the city's history. After a concert in Memphis on July 4, 1975, Richards, Moon, and a few members of the band's entourage decided to drive from Memphis to Dallas, where the band was scheduled to play on the 6th. The car stopped for food in Fordyce, which must have been hilarious in its own right. Shortly thereafter, with a policeman supposedly seeing huge clouds of smoke emanating from the car, the limo was pulled over and multiple arrests for drug possession and reckless driving were made.

The band's manager and an attorney flew into Fordyce that night and bond was posted, releasing Richards and the others. Later, the charges were dropped, although a knife confiscated from Richards, is still on display in the Dallas County courthouse. The Stones played in Dallas the next day.

The website Arkansas Road Stories recounts a number of interesting details regarding the incident:

At about 3:30, after having steaks and fried chicken and signing autographs, the group piled back into the car, pulled onto the Fordyce Bypass and pointed the grill toward Camden. Before they got out of Fordyce, however, the city police (Joe Taylor and Eddie Childers) had pulled them over. The newspapers reported several different versions as to exactly why they were pulled over. One story was that a waitress at the restaurant called in a complaint that the rockers had been overly boistrous and rowdy, disturbing the peace. Another story holds that a motorist called the police to report a car that was running other drivers off the road. Yet another story has the Fordyce Police stopping the car on the request of the State Police. And yet still again a further 'nother story is that the Fordyce police car saw the car swerve, pulled it over, and detained the driver on a weapons charge when a leather-sheathed hunting knife was spotted in the seat next to him.

At about 7:00pm their lawyer, Bill Carter, flew in from Little Rock. Carter was a native of Rector, Arkansas who had served on the Secret Service security detail for Presidents Kennedy and Johnson. He had originally signed on with the Stones as a security consultant, but eventually became part of their legal representation. (He also represented country singerTanya Tucker.) He is at least partly responsible for the decision to take the scenic drive. For years he had been telling the band about the state's natural beauty, so this little crew took the opportunity to check it out for themselves. Touring by car while others flew was characteristic of Richards, who liked driving the back roads and seeing the country.

Earlier this month, the Grambling State Band was involved in a traffic accident in Fordyce, injuring 13.

KBJT-AM, the home of the Royals, is a talk radio station. At night, KBJT, "The News/Talk Leader in South Arkansas", can reach Pine Bluff, Arkansas and can be heard outside of Hot Springs.

Timber (term?) has been the primary industry in Fordyce for years, given the town's proximity to numerous pine forests. Recently, numerous mills in Fordyce have laid off employees.

No Major League baseball player has been born, or died, in Fordyce.