The Royals Radio Network is comprised of over eighty affiliates and stretches across seven states. In this recurring series (previous features listed below at the bottom of the page) Royals Review attempts to give each affiliate its proper airing, celebrating the regional reach and heritage of Royals baseball. Baseball on the radio is a decidedly low-stakes, low-tech venture. Let it always lay hidden like a strength in the backyards of the mind.

Two hundred and eighty miles north of Kansas City lies Hastings, a proud Royals Radio affiliate in central Nebraska and one of the most colorful cities in the Cornhusker State. How colorful you ask? It stands out like a big glass bowl of bright blue Kool-Aid on a white cotton table cloth. The home of Tom Osborne and the original Kool-Aide man, Hastings is one of a handful of outlying Nebraska affiliates that may remain loyal to the Royals long after the Omaha-Lincoln corridor secumbs to all things Cub.

The county seat of Adams County (pop. 31,151, 11th largest in the state) Hastings was founded in 1872 and named for Thomas Hastings, a railroad contractor. If you ever want to have a town named after you, I suggest that you build a time machine, go back to about 1850, and start working for a railroad. I can't guarantee what state your town will end up in, but rest assured, it will happen. Just down the road, fellow Royals Radio Network Affiliate Holdrege, Ne, was named just the same way. Anyway, Hastings quickly grew as a railroad town, and also recieved some residual benefit from being close to the old Oregon Trail route. Today, four Fortune 500 Companies have offices in Hastings. 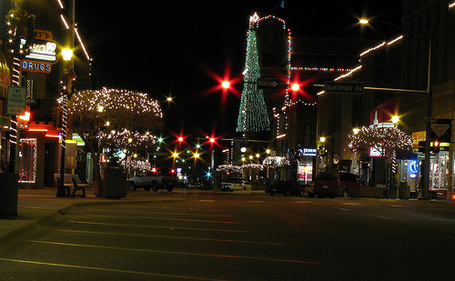 Downtown Hastings, done up for Arbor Day I believe. I see a tree, and it is Nebraska.

The late twenties and early thirties were heady days for Hastings, when two lasting moments in the town's history took place. All that needed to be added was water. First, in 1927, Edwin Perkins and his wife Kitty invented Kool-Aid, a variation on a preexisting product named "Fruit Smack". Originally Kool-Ade, the drink eventually made the switch to Kool-Aid, and became an American favorite. Kool-Aid originally came in six flavors, including the now discontinued raspberry flavor. (For more on the history of Kool-Aid, click here.) Each August, Hastings hosts the Kool-Aid Days Festival -- scheduled this year for August 14-16, which probably means that record numbers of listeners will be tuning into Royals-Tigers on the radio that weekend -- that annually beckons Kool-Aid fans from all over the world. Last year's Days featured a concert, boat races, a dance, and of course, an official appearance by the Kool-Aid Man. And of course, there was the World's Largest Kool-Aid Stand.

(Personal note: I actually love Kool-Aid. Sometime early in this decade, I started mixing unsweetened packets in with fountain cola, and was breifly obsessed with it. During the summer, I still do it a lot. It's especially good with a Sprite or Dew base. Sometime when I was really into this, around 2003 I think, I discovered Hastings/Kool-Aid days, and spent about a week emailing friends trying to sell people on a roadtrip. We never did it, of course. But maybe this year...) 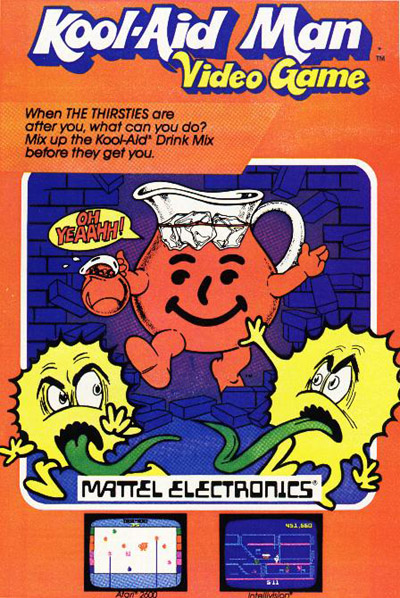 If you won the game and entered a specific sequence of twenty commands on the final screen, an image of Miss Hastings, 1980, in a two-piece appeared on the screen for three seconds.

The second landmark event came in 1933, with the country mired in its worst economic slump until the one that was actually not as bad eighty years later, the Fisher Fountain, originally an exhibit at the 1932 Adams County Fair, was installed in downtown Hastings. Also known as the Rainbow Fountain, the Fisher Fountain was meant to serve as a symbol of hope and is purported to be, ok, now let me get this straight, the largest fountain between Chicago and Denver (come on KC!?!). By my calculation, that also makes it the largest fountain between Grand Island and Wichita, as well as the largest between Cedar Rapids, Iowa and Pueblo, Colorado. In one of the most pathetic unsolved mysteries of all time, in 1984 the F. Fountain was exploded in an apparent hate crime against artificial water displays. To this day, the case remains unsolved, but the fountain has been rebuilt according to original specifications. Accordingly, in the interests of true romantics, the vintage 1932 formula for water has been used complete with large quantaties of lead and pesticides. 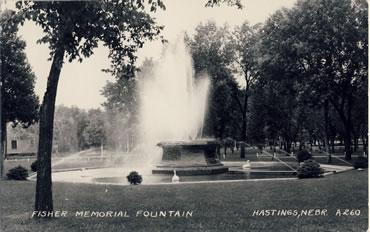 As long as the fountain killers walk free, no one is safe.

Almost as old as the town itself is Hastings College, a Presbyterian liberal arts college that dates to the 1880s. HC's most famous alum, Tom Osborne '59, if perhaps the most famous man to ever come from Hastings, and possibly Nebraska. Osborne was born in Hastings, graduated from Hastings High, then went on to attend Hastings College. In 2000, Osborne was elected to US Congress, representing Nebraska's 3rd District, which includes Hastings. In 2006, Osborne ran for Governor, but surprisingly lost a close race in the primary, in part because he fell behind Dave Heineman in many rural counties, due to a perception that Heineman was more conservative. Osborne was defeated 3097 to 2684 in Adams County. 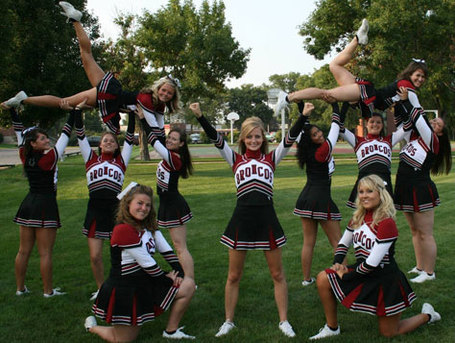 The Hastings College Bronco Cheerleaders listen to the Royals non-stop on KICS-AM.

Two Major League players have been born in Hastings. The first, Johnny Hopp, was born in 1916, and had a substantial career, appearing in 1393 games for a number of teams from 1939-1952. Hopp was a perennial MVP candidate with the Cardinals in the early forties, and was an All-Star in 1946. Hopp's greatest asset was his speed, and he frequented the NL leaderboards in triples and steals, though today his totals seem oddly small. Hopp died in Scottsbluff in 2003. For example, his eight steals in 1943 was good for tenth in the league. The second Hastings native was much more obscure, a University of Missouri pitcher named Rick Henninger, who appeared in six games for the Texas Rangers in 1973.    Les Nunamaker, a catcher who played from 1911-1922 with the Red Sox, Yankees, Browns and Indians died in Hastings in 1938. According to this website, Nunamaker, a member of the 1920 World Series winning Indians, went to Hastings to work for his brother Fred at the Hastings Pioneer Market. He was also a member of the Hastings Gun Club, and is thought to be the only professional athlete in U.S. history to possess an interest in firearms.

Beyond those players, Hastings has a rich, though nearly completely lost baseball heritage. Like a number of radio affiliates in Nebraska and Iowa, Hastings was home to numerous minor league teams throughout the twentieth century, with the last team folding in 1959. That team, the Hastings Giants, was a San Fransisco affiliate, that played at Duncan Field, which still stands in town. The '59 team featured an outfielder named Willie Beaman, who would later become a star quarterback for the Miami Sharks. Willie was known to draw on his experiences in rural, 1950s Nebraska, to deal with the pressures of playing QB.

In 2007, Hastings was named by Yahoo! The Greenest City in America, claiming a $250,000 dollar prize. The victory party drew over 2,000 celebrants and green Kool-Aid was passed around.