English parodist Max Beerbohm once said, “There is much to be said for failure.  It is more interesting than success.”

By this logic, the 2008 Idaho Falls Chukars just enjoyed their most interesting season in their short history, as not only was their 33-43 record the 2nd worst in the Pioneer League, it was also the worst record they’ve had since they joined the Royals’ minor league system in 2004.

Now, while it would be easy to be critical of the team, I read somewhere that criticism is most effective if it is delivered in such a manner that it makes the recipient feel better about himself.  One technique, popular among communication gurus and self-help authors, is the "Criticism Sandwich," in which you sandwich a criticism in between two compliments.

Here's how the basic structure goes:


Compliment:  "Bob, I appreciate how much of a hard worker you are."

Criticism:  "Unfortunately, your incompetence cost us the sale, and we'll have to fire you."

Compliment:  "By the way, that's a nice shirt."

Sure, Bob's intelligence has been called in to question, and he's now out of a job, but he comes away from this exchange knowing that his work ethic is appreciated and that he is recognized for having at a minimum a sociably acceptable fashion sense.   Boom, Criticism Sandwiched!

With regard to the Chukars' 2008 season, it may be in the best interests of everyone involved if we try the sandwich technique.   Let's see how this goes:

Compliment:  Guess which player led the Pioneer league in OPS (1.100)?  A Chukar!

So why were things so bad?

Aside from a few bright spots, the offense was horrendous - this was the only team in the Pioneer League to post a sub-.400 SLG, which is not altogether surprising considering they were also last in the league in homeruns.

Clearly, the team missed Hosmer, and his presence alone may have been enough to right the ship, as he was a monster at the plate during his short stint, as half of his hits went for extra bases, and he had nearly as many walks as hits.   Even if he couldn't keep up his torrid pace, Hosmer would at the very least have displaced 1B Alberto Espinosa, who was one of the biggest OPS-sinks on the team with a Tony Pena-esque .571.

The graduation of 2007 luminaries Anthony Seratelli, Clint Robinson and Nick Van Stratten, (all of whom posted OPS's above .900) along with the departure of Mike Moustakas, certainly didn't help matters for the team, but such is the transient nature of minor league baseball.     Even though you have to expect giant variations in performance from year to year, it doesn't necessarily erase the sting felt from going from first place in 2007 to last place in 2008.

Variations aside, there has been one very disturbing trend for the Chukars over the last few years.  Despite the professed importance of OBP in the last few years by both Allard Baird and Dayton Moore, the team's performance in that category appears to be a bad omen for the parent club. 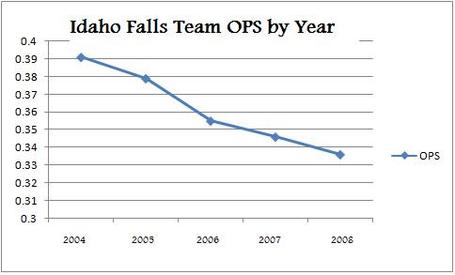 Dayton Moore, of course, did the sensible thing by removing Jim Gambella as manager of the Chukars.   Unfortunately, he removed him by promoting him to manager of the Burlington Bees. 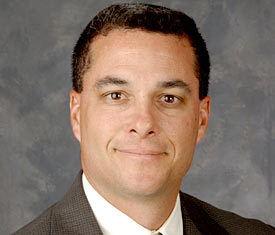 If Moore were President Bush, Gambella would have won the Medal of Freedom

On the plus side, Gambella will be replaced by Darryl Kennedy, former manager of the Wilmington Blue Rocks, who has won four Manager of the Year awards.   Who knows if he can reverse the trend of the falling OBP, but at least he was able to keep the Blue Rocks around league average in that area.

Characteristic of a Dayton Moore minor league team, the Chukars led the league in stolen bases with 142.   They ran away with it, actually (no pun intended), as the next highest team mustered only 92 stolen bases.   Considering they only played 76 games, that's good for 2 stolen bases per game.  I'm not sure if that's a record or anything, but it's certainly impressive.

On an individual level, among the brightest spots were the performances of OF Carlos Testaand SS JJohn Alfaro

Testa, an 18th round pick out of Belmont University, had a fantastic year, posting a .304/.395/.462 line, with 5 hrs and 12 steals.   Considering the dearth of articles written on the man on the internet, it would appear he isn't exactly generating a lot of buzz in the scouting community, but he did manage to at least make one Royals Top 60 prospects list, at number 57.

At least a year younger than Testa, and playing a more difficult position, John Alfaro could be an asset for the Royals somewhere down the line if his glove is as good as his bat was in 2008.  Alfaro led the team in homeruns (9), triples (5), and doubles (25) but seems to have a bit of a problem with plate discipline, as he struck out more than seven times than he walked.    He'll have to do considerably better in that category should he wish to continue his success in upper minors.

Observant fans will also note that catcher Salavador Perez also had an excellent season for Idaho Falls (.994 OPS) albeit in a handful of at bats (43).    Unlike Testa and Alfaro, Perez has received quite a bit of press on the internets, and has been lauded as much for his defense as his offense.  If both hold up well, he's likely to pass rather quickly through the Royals system, as there aren't really any prospects blocking his ascent.

On the pitching side, there weren't too many standouts, although there weren't too many bad performances, either.    Perhaps the most promising performance, at least relative to draft position was Blaine Hardy, who struck out 34 in 34 innings, with only 8 walks.   Hardy, as you'll recall, was a 22nd round draft pick in the 2008 draft, and may or may not be related to the greatest pitcher who has ever lived.

As the man said, nothing gold can stay.  So, while it may have been a bit of a rough year for the Chukars, things can always change quickly in the minors.  With a strong draft in 2009, and perhaps with a little guidance from the new manager, Idaho Falls can reclaim their rightful place as the lords of the Pioneer League.