As we approach the draft, I will periodically review Royals drafts starting with 2002.   Why start with 2002?  Because I could not stand the psychological damage that would come with breaking down the 2000 and 2001 drafts.  I will briefly review those infamous drafts.  The 2000 draft did yield us David Dejesus and the Great Ruben Gotay but it was just never a very exciting draft.  The 2001 Draft was Epic for a couple of reasons.  Surely other teams have gotten as little as the Royals got out of the draft (27 ABs from Angel Sanchez and Mel Stocker got 3 abs and 4! Stolen bases with the Brewers in 2007).  But the Royals famously, at least for us fans, got-not one-but two Hall of Fame talents with their first two picks and spent a lot of money to sign those ‘talents'.

I'll go over the picks in the first five rounds and then highlight some other picks that warrant it.

As we approached the 2002, Allard Baird had learned his lesson from Colt Griffin in the wooden and literal way that only Allard could.  If he drafted a pitcher with the #6 overall pick, he was going to draft a college pitcher.  The Royals scouts at the time (did they have more than one scout on the payroll?) told Allard that the best college pitcher out there was actually a HS pitcher from Florida.  Zack Greinke was polished with very good control and good stuff, throwing a dizzying array of pitches and eith.  I've heard that the debate on draft day was whether to take Greinke or Prince Fielder with that pick.  I would argue the Royals chose wisely.  As we move through these draft reviews, I will rank our pick against the 9 picks made after the Royals.  This is a good snapshot of how the Royals did relative to the teams drafting near them.  I would rank the picks:

Since the draft, Greinke has had a smooth road to becoming one of the best pitchers in Royals history.  Well, maybe not but he is positioned to take his place with Appier and Saberhagen in the Royals' pitching pantheon.  The extension he signed this offseason should be good for all parties.  The question that gets me most excited is that I still have no clue what his ceiling is.  His career path is about as unique this side of Josh Hamilton as you will find.  He could plateau and be as good as he was last season for several years which would be great.  Of course, he could regress-but what fun is that to think about.  But he could have in him another spike of performance that would take him into the top echelon of pitchers in the American League.

Good Job Allard!  Although one has to wonder if he made the right choice for the wrong reasons.  Allard seemed to think the best reason to take a college arm was that they are more polished.  Since Greinke was polished he fit the bill.  Of course as big, if not a bigger concern is injury.  Greinke's arm has never, that I know of, had any trouble.  But his off field issues only illustrate all that can go wrong on the path from HS pitching prospect to the big leagues. 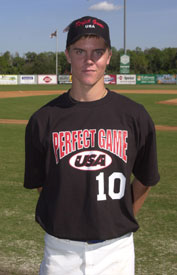 As you will as we analyze Royals drafts, sometimes it seems like that Seinfeld episode where George would make one good joke at work and go home.  The Royals, for several years, seemed to make the 1st pick and then pat themselves on the back for their hard work and let the rest of the draft picks get drawn from hat.  The Royals took Adam Donachie with their 2nd round pick-a switch hitting high school catcher from Florida.  He was known for his defense behind the plate, but the Royals hoped his offense would develop.  Donachie had a couple of nice years hitting in High Desert of the California League but so did every other hitter on those teams.  He was actually selected in the 2006 Rule V draft by the Phillies who then traded him to Baltimore who eventually returned him to the Royals before the season started.  He was still with NW Arkansas last season and posted a 609 OPS.  It would be wise to remember in the future that defense first HS catchers are should probably not be drafted in the 2nd round. 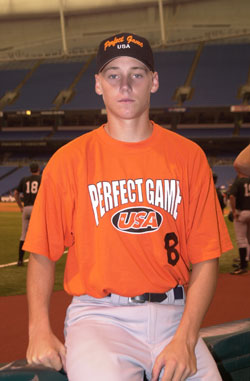 Other players selected in this round after Jensen:  Curtis Granderson, Josh Rupe, Dan Ortmeier

In the 4th round the Royals took a Brooklyn HS lefty-Danny Christensen.  In 2003, his first full season, he went 1-12 for Burlington.  He was injured for almost all of 2004 and then had a nice year in Burlington (again) in 2005. For a couple of years he was mentioned as a sleeper in the system.  At High Desert in 2006 he had a 4.8 ERA-which isn't bad given the context but he flopped at AA in 2007 going 3-15 with an ERA over 6.  After 2007, he was the player to be named later it the Roman Colon trade and was sent to Detroit where had a 4.14 ERA but not very good peripherals at AA last year.

The Royals took a JUCO middle infielder in the 5th round.  Donny Murphy had a great season at Burlington in 2003-posting an 822 OPS-which accounting for age and league is excellent.  In 2004 he had a decent season before getting called up to the Big Show for 27 ABs.  I had high hopes for him, thinking we might exercise the demons of Mark Ellis.  When we sold him to the A's after the 2006 I was afraid it would bite us in the butt.   However, he has spent 2005-2008 bouncing between hitting great in the minors and struggling at the big league level.

Other players selected in this round after Murphy: Ben Francisco, Pat Misch 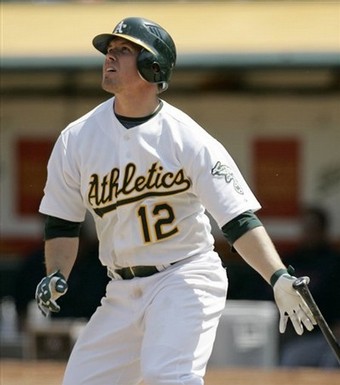 Others Picks of Note

The Royals took HS SS Brandon Jones in the 6th round.  He wound up going to JUCO and it was thought he would sign as a "Draft and Follow" in May 2003 but he ended up not signing and being drafted by the Braves in the 24th round in 2003.  He became a nice prospect and might platoon with the Braves this year.

Other players selected in this round after Jones: John Maine, Scott Olsen

What can you say: the guy has a 2.000 OPS in his major league career.  The consummate AAA catcher.

Other players selected in this round after Tupman: nobody really

Kila Kaaihue was drafted in the 15th round from Hawaii.  If memory serves, he was projected to go higher but slipped and the Royals grabbed him.  He's always had a great eye but struggled to put it together until last year: 38 HRs, 106 walks, 70 k's.  I don't think it was a fluke.  Hopefully the Royals appreciate what they have here-a cheap, high OBP, power threat.  I think a few month as AAA will be good for Kila but after that-the Royals may have a find a way to get his bat in the lineup.

Other players selected in this round after Kaaihue: Eric Stults, Dustin Nippert 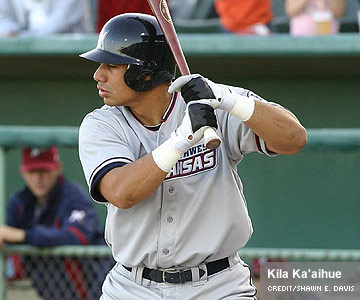 They say that hitting a baseball is the hardest thing in sports but I would say that hitting on a draft pick is even harder.  If you had a 10% success rate in finding useful major league players, you would consistently have some of the most successful drafts in baseball.  If you get an above average player and an average player each draft, you are doing well.  With Greinke graduating to Major League Ace and Kaaihue emerging, this draft looks above average.  What makes it a little weird is that beyond Greinke and Kaaihue, none of the other draft picks ever made much noise in the form of becoming a prospect.   I would give this draft effort a "B".  The next year, the Royals would draft one slot higher (5th overall) and have one of the most underrated gifts in baseball: a supplemental pick.