Share All sharing options for: The Newest Royal: Juan Cruz

About 11 months ago, I happily welcomed Ramon Ramirez to the Kansas City Royals.  Now the Royals have acquired another good righty reliever in Juan Cruz.  The contract is reportedly for two years and $5.5 million with a club option for a third year at $4 million.  While the Royals and Diamondbacks discussed a sign-and-trade deal in which the Royals would give up prospect(s) instead of their second round draft pick (compensation because Cruz is a Type A free agent), in the end the Royals decided to just sign Cruz and give up the draft pick.

Dayton Moore has added one dominant pitcher to his bullpen for each of his seasons with the Royals.

Will Cruz really be the next dominant reliever for the Royals?  And who is this mercurial flame thrower? 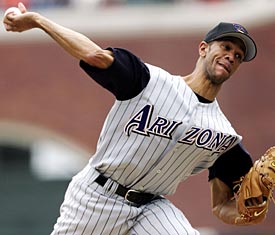 Cruz relies heavily on two pitches: a 94-95 mph fastball (topping out in the high 90's) and a much slower 81 mph slider.  As you would expect from such a slow slider, it has a good deal of break.  He occasionally but rarely mixes in a changeup or a curveball.  The Pitch f/x data shows that Cruz's control problems come from his fastball, as he has average control over his slider and change.  Cruz usually throws his fastball over-the-top, but his slider and change are usually released from a slightly lower arm slot.  He uses his slider more against righties and uses his changeup almost exclusively against lefties.  You can find a more detailed breakdown of his Pitch f/x data here.

What we see here is a struggling starting pitcher who came into his own when he was moved to the bullpen.  There have been some ups and downs but there have always been a lot of strikeouts, a significant number of walks and not too many HR's.  That's why his defense independent stats metrics (like FIP and tRA) have usually been good. 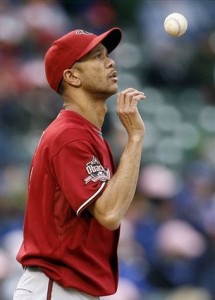 Juan Cruz was signed as an undrafted international free agent out of Bonao, Dominican Republic in 1997 by the Chicago Cubs.  After struggling in his first two professional seasons, Cruz had a breakthrough minor league season in 2000 at age 21, splitting the year between low-A and high-A.  He made his major league debut the next year and pitched well for the Cubs, making eight start (3.22 ERA in 44.2 IP).  He spent all of 2002 season in the majors, splitting time between the rotation and bullpen, with largely positive results (3.98 ERA in 97.1 IP).  The next two seasons found Cruz in the minors more than in the majors and in 2004 he was traded to the Braves (former Brave!).  He stayed with the Braves for one very good major league season (2.75 ERA, 72 IP) before being sent to Oakland as part of the Tim Hudson trade.  Cruz split the 2005 season between the majors and minors with poor results and then was traded to the Diamondbacks for Brad Halsey.  Since joining the Diamondbacks, Cruz has been a major asset to their bullpen, usually used as a setup man and never as a closer.  His professional Saves total is 1.

So, why has such a talented player as Cruz been shipped around so much?  First, while he has a live arm, he's always had control problems.  Second, he has a reputation of being a million dollar arm with a ten cent head.  Third, it's the nature of modern baseball that even good players get traded, and this is doubly true of relief pitchers.

Cruz has had some nagging injury problems over the years, but nothing major.  The Injury Tool at fantasypitchfx.com (which is very useful) shows that over the last three years, he has been on the disabled list three times for a total of 74 days for shoulder soreness, a tricep strain and an oblique strain.  Thankfully none of these involve significant structural issues (knock wood).

So who is this guy?  In a lot of ways he's like Robinson Tejeda.  More accurately, I'd say that Robinson Tejeda is Juan Cruz-lite.  They are both largely failed starters who have succeeded in the bullpen.  They both have 2-3 pitches, relying primarily on fastball, slider and changeup.  They both have legitimate mid-90's power arms which get them a lot of strikeouts, but they also have control issues and give up a lot of walks.  The good news is that Robinson Tejeda is (or at least was) a diamond in the rough and Cruz is a diamond that's already been polished and is sitting in a nice platinum setting.  Ok, that might be a little over the top, but if I were 15 years younger, I'd say that Juan Cruz is, quite simply, the balls.

The projection systems, in varying degrees, like or love Juan Cruz.

In short, the Royals now have a dominant righty setup man if they are smart enough to use him that way and not have him pitch the seventh inning and then give the ball up to Farnsworth.