2008 must have been a bittersweet year for Kansas-based fans of minor league baseball. On the one hand, the Royals organization saw spectacular performances from many of our young hitters and pitchers, and some clubs even managed to bring home an elusive division championship.

On the other hand, 2008 marked the departure of the AA affiliate from Wichita, as GM Dayton Moore relocated the team to Springdale, Arkansas, citing poor attendance and antiquated facilities as the reason behind the move. It made sense from a business perspective - relocation would bring in a new fan base and expose the Royals to new geographical region, as well as allow the players to play in a brand new ballpark designed by the KC-based firm responsible for gems like Camden Yards and Progressive Field. It also didn’t hurt that owner David Glass lives close by. Still, the loss of the team must have stung dearly for the 1,000 or so diehard fans who managed to show up to each game.

Those fans may have felt vindicated a bit by what happened next, as subsequent decisions related to the creation of the new team incited confusion and stirred up more than a little controversy.

First was the non-traditional nomenclature -- rather than calling the team the "Springdale Naturals," ownership opted for the more opaque "Northwest Arkansas Naturals", in what was most likely a cynical attempt at trying to lure in unsuspecting fans of early 90’s rap. (Straight outta Springdale!)

Second, and more damning, was the choice of the team mascot, "Strike." A Bigfoot/Caveman/Hillbilly hybrid, the new mascot immediately became one of the scariest in the minor leagues, famous for its taste for human flesh. 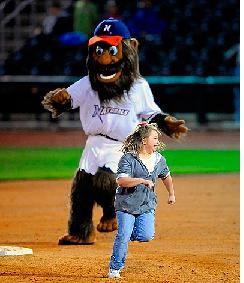 On the field, the 2008 Naturals performed valiantly -- winning 75 games while amassing 64 losses. As with every Kansas City minor league team last year, the Naturals pitching was responsible for their success, as they posted the second lowest team ERA (4.15) in the league.

Also, as with every Kansas City minor league team last year, their hitting sucked -- they were second to last in runs scored, outpacing only the Arkansas Travelers. (Arkansas Travelers? Suddenly the move to Arkansas makes no sense at all.) Aside from a few luminaries, the Naturals were every bit as anemic at the plate as the rest of their Royals affiliate brethren.

Hawaiian Punch, Kila Monster, That Hawaiian Guy… whatever you call him, the guy can rake. Kila’s performance last season didn’t just lead the Naturals, it was among the best in all of minor league baseball. The .463 OBP was about 40 to 50 points higher than any other hitter in the minors, and was second to only Chipper Jones (.470) in all of baseball. He actually walked twice as often as he struck out last season, which was outstanding.

It wasn’t just about plate discipline either -- Kila hit for power, as well, as he led the team in homeruns and slugging. There really aren’t enough superlatives available to describe his season. He was naturally rewarded for his big year by getting the opportunity to repeat it again in AAA Omaha.

Hey, did you know there was another 1B that played for NW Arkansas last year? Me, neither. Kila’s monstrous year overshadowed Juan’s strong performance, but he still managed to lead the team in one category -- doubles, of which he hit 36. He was also rewarded for his success with his second straight Texas League All Star game appearance. Unfortunately, due to his age (28), his prospectdom is virtually nil. Factor in that he’s originally from the Dominican Republic, there’s a chance he’s actually about ready to start collecting social security payments.

Falu really only did a couple of things well last year, but he did them very well. He hit for average, cracking the Texas League top 10 in that category with a .301 avg, and he showed off a pretty good eye, with 38 BB’s against just 31 K’s. Had Kila not crushed him in that category, it probably would have seemed a lot more impressive.

Falu didn’t hit for much power and didn’t display much speed, as his .378 SLG and 9 CS (against 11 SB) demonstrate, so feel free to contest this ranking. Falu will continue to see time in the outfield at 2B in 2009 with the Naturals.

Cory hit homeruns at almost a good a clip as Kila, with 10 in just 167 at bats. He was also a Texas League All-Star… in 2005, which says a lot about whether or not we’ll be seeing him in the majors any time soon. He’ll turn 30 this season, so 2009 may end up being his swan song. He was promoted to Omaha, at least, so barring any trades and assuming injuries to Jacobs, Butler, Shealy, Kila, and likely Guillen, Costa, and Maier, you may get to see him playing in Kansas City this summer.

McFall’s one of those guys who performs well enough to get promoted but never quite well enough to generate serious buzz about him, and his season last year was no different. It was pretty good, but not great, as he hit a fair number of doubles and homeruns, and walked at a decent rate. He didn’t hit well for average, which depressed his overall rate stats.

The future’s a bit murky for Brian. He’s stuck with Shealy and Kila ahead of him in Omaha, and Jacobs and Butler up in KC, so advancement looks unlikely. He’s always hit for pretty good power, and there were several people before the season started last year who viewed him as good as or better a prospect than Kila, so there’s a chance something could click for him. Odds are that his chance will come with another organization, if at all.

Rosa may have had a bit harder time in Omaha, but he dominated Texas League hitters last year -- with just under a strikeout an inning over 8 starts. While Dan Cortes in considered the better pitching prospect, Carlos has done a good job of outperforming him thus far in their short careers. Carlos also had a nifty stint in the majors, when he struck out 3 in 3 innings, with 0 walks and just one run.

Hamulack quietly put together a great year for NWA in 2008, so quietly that I didn’t even know he existed until his name started popping up last month in spring training exhibition games. His K/9 was one of the best on the team, and his 23:1 strikeout to walk ratio must have made fellow teammate Rowdy Hardy feel nostalgic for his early part of his career.

As a submariner, Hayes evokes memories of Royals great Dan Quisenberry. As a brainy sabermetric-friendly blogger, Hayes calls to mind (now) fellow minor leaguer Brian Bannister. He didn't strike out too many batters this season (he had a low 5.3 K/9), but he made up for it by minimizing the number of walks and homeruns allowed. He's the kind of pitcher you root for, and because of his unorthodox style, he's the kind of pitcher who you won't be surprised to see gracing the Powder Blues in a couple of years.

Nicoll was once considered one of the top Royals pitching prospects, having started off his career with strong seasons at Idaho Falls and Burlington in the rotation. Unfortunately, he got absolutely shelled in 2007 at Wilmington, and it wasn't just cosmetic, as he declined in all of his peripheral stats. An injured quadriceps may have contributed to his fall.

Nicoll was converted into a reliever after his fateful season, and seems to have gotten things back on track. He sported the top K/9 for the Naturals this season (11.3), while being very stingy with the walks, as well.

It could have been Jarod Plummer or Daniel Cortes in this spot, had the latter cut down on his walks and had the former cut down on his homeruns allowed. Hughes is another guy like Nicoll that was considered one of the better minor league pitchers for the Royals, until Moore took over from Baird and injected the system with a slew of young talent.

Hughes also spent some time in Omaha last year, but failed to match his success in Springdale. He'll get a chance again in 2009 to see if his promotion was warranted.