When I first proposed this series to Will some time back, there was one team above all others that I was excited to write about... the Wilmington Blue Rocks. 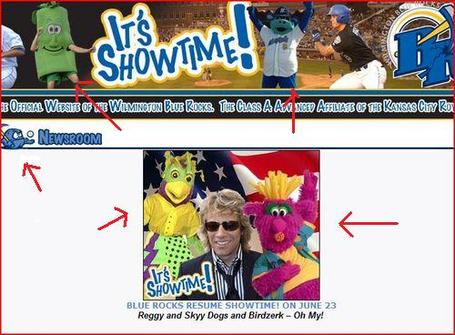 A dancing celery stick AND a guy with french fries for hair.  Why?

Like most Royals affiliates last year, the Blue Rocks ended the season with a losing record.  However, based on their runs scored (591) vs. runs allowed (590) on the year, one would have expected at least a .500 season out of them, and really, they just missed that by a game.  Their 69-71 record was still good enough for second place in their division.

in the end, the Rocks's record was basically inconsequential, as the Potomac Nationals and Myrtle Beach Pelicans had a stranglehold over the Carolina League, dominating in all facets of the game.

To the Blue Rocks' credit, they did best the Nationals and Pelicans in pitching, with a league low ERA.   However, they also featured the league's worst offense.  This should not be cause for alarm, however, as the Blue Rocks find themselves in this position basically year after year, as they play in an extreme pitcher's park, which usually suppresses their ability to hit for power.   The 2008 Blue Rocks attempted to compensate for this by drawing a fair number of walks, and having an unusually high number of stolen base attempts.   While they failed to break the record, they did lead the league, ending up with 258 swipes, which was almost double the runner-up in that category.  All that proves, though, is that stolen bases don't necessarily help you score more runs.

To tell you the truth, I had never heard of Cody Strait until I started doing research for this post.   Part of that can be attributed to the fact that Cody hadn't joined the Royals organization until midway through the 2008 season, having been drafted and developed at that point with Cincinnatti.

The other part can be attributed to the fact that Cody, unfortunately, is a bit of a non-prospect.  He'll turn 26 this May, and until his stint with Wilmington this past season, had never cleared an .800 OPS in any year since his first season in rookie ball.


Considering that the Royals already had two capable right fielders on the squad, it didn't make a whole lot of sense to bring Cody into Wilmington.  A part of me can't help but wonder if his acquisition was solely to improve their chances at setting the SB record, as Cody already had on his resume a season in which he stole 49 bases.   Whatever the case, he had a great season for the Blue Rocks, leading the team in HRs and OPS in just a fraction of the at-bats of some of his teammates.

The line above is a bit misleading -- Orlando put up most of those numbers while he was with the White Sox organization.   Some of you may remember Orlando as the prospect we got in return in the Horacio Ramirez trade, and based on last season's numbers, it would appear we made out pretty well on the deal.  Orlando appears to have a decent power/speed combo as he would have been second on the team in homeruns and also led the league in triples, with 14.

He also led the league in at-bats, which diminishes those other achievements, but only a little bit.  Most encouraging for Royals fans is that he actually hit a lot better with the Royals than he did at any other time during his career, with a .254/.325/.507 line.

Interesting fast fact about Paulo Orlando -- he's actually from the town of Sao Paulo, Brazil.  I can't think of too many players (or any, actually), who have the distinction of sharing the same name with his hometown.    Add in the fact that he was signed by scout Orlando Santana, and it gets creepy.  Well, not really.


While teammate Derrick Robinson's typically been considered the better prospect of the two, Dickerson's the one that's actually produced.  Dickerson's name still gets mentioned as one of the top hitting prospects in the organization, but he's far, far behind the likes of guys like Moustakas and Hosmer, and has never come close to cracking anybody's Top 10 list, so that's more of an indictment of the Royals' ability to develop hitting than it is a compliment to Dickerson.

It's hard to dislike Joe's 2008 season.  Like fellow RF's Strait and Orlando, Joe showed a good combination of power and speed -- he didn't crack double figures in HRs, but he did have a healthy number of triples (10) and doubles (10).   It's hard to say what trajectory Dickerson's prospectdom is on at this point, but it shouldn't surprise you if he follows Mitch Maier's career path to 4th outfielder-dom.

If you find yourself in a minor league fantasy baseball league this season, and the only offensive stat you count is stolen bases, then there's a good chance Derrick Robinson will be a first rounder.


Other than that, it's all projection at this point.   Baseball America loves his speed, and have named him the Royals Best Athlete two years in a row.   At some point you hope he develops another facet to his game, as he's still stuck at 3 career homeruns and hasn't displayed much in the way of plate discipline (although he did cut down on his strikeouts this year while almost doubling the number of walks he took.)

Robinson was the youngest guy on the team (20), so there's a chance he'll have a Kenny Lofton or Carlos Beltran-esque leap forward this year.   In the meantime, he makes the top 5 list by virtue of his impressive, league-leading stolen base total.

It's hard to believe Bianchi's still only 21, as he was in the same draft class as Alex Gordon, who already seems to have been with the big league club for years.

Bianchi's had a bit of a weird journey through the minors thus far:  he was crushing rookie league pitching as an 18 and 19 year old (to the tune of an 1.200+ OPS), before suffering a season ending injury in 2006.   He struggled mightily in his return with the Burlington Bees in 2007, as it looked like his injury sapped all of his power and perhaps permanently derailed his career.

That's why Bianchi's season last year, although only a modest success, was so encouraging.  He saw a major spike in his slugging numbers (he led the team in all extra base hits), which offset the disappointment in what appeared to be a tiny step back in his plate discipline.   We'll see if he can pick up where he left off before his injury in 2009.

Wood led all Blue Rocks starters in K/9, and was also the team leader in WHIP (0.82).  Not suprisingly, Wood is also the only player on the team to crack Baseball America's top 10 Royals Prospects (#10).

Wood was promoted mid-year to NW Arkansas, where things got a little more challenging for him (5.29 ERA, 18 GS).  His peripheral numbers were still pretty good, so his troubles there can be chalked up to adjustments and/or small sample sizes.

Barrera provided a Soria-like presence in the bullpen, leading the team in K/9 (12.2), while also being second best on the team in allowing homeruns, with a paltry .3 allowed per nine innings pitched.

He did walk quite a few batter per inning, but more than made it up for it with his dominance in the other areas.   Best of all, he was on the low-end of the age spectrum -- he will still be just 23 when he starts this year in NW Arkansas.


This is a bit of a copout, I know, but there were too many good performances to make a choice.   While Wood and Barrera's performances seemed head and shoulders above their counterparts, one can legitimately make the case that seven or eight pitchers are deserving of these last three spots.   The pitching really was that good for Wilmington last year, which gives you hope that the Royals won't have to resort to inserting guys like Sidney Ponson and Horacio Ramirez into the rotation in a few years.

Here's a quick glimpse of guys worthy for these final spots:

I guess if I were pressed to choose the top 3 out of that bunch, it would have to be Nicoll, Holland, De La Vara, but I could easily be convinced otherwise.  The important thing to note was that the pitching was awesome.