It must be fun to be a baseball fan in a town that houses a AAA affiliate. Not only do you get to enjoy the highest quality baseball outside of the majors (or Japan), you also get to watch a wide array of players take the field.

For example, had you picked a random Omaha Royals game to watch last season, you would have had the pleasure of seeing a hodgepodge of different players:  rising stars like Mike Aviles, Billy Butler, and Kila Kaaihuie, retreads like Gookie Dawkins and Angel Berroa, AAAA tweener-types like Shane Costa and Damon Hollins, and a bunch of guys like Ryan Shealy and Brayan Pena, who don't really belong in the minors but who also don't have a roster spot open for them on the parent club.

On top of that, you get awesome promotions that are usually too risque or too bizarre to be considered acceptable at the major league level. Take this year's bobblehead promotion.

If you go watch a game on bobblehead night in Kauffman, you'd expect to receive either a current player or a former allstar like George Brett or Amos Otis. In Omaha? Warren Mother Flipping Buffett. Why? Because the guy could rake, that's why.

Or how about this other promotion. Ever heard of Todd Balduf?  I hadn't, but if you look at the Omaha Royals stat sheet from last year, you'll see he logged exactly one game and only one at bat. What was the point?  I'm guessing it was "Moonlight Graham" night at Omaha Stadium, and one lucky fan got picked from the stands to get a minor league at bat.  At least, that's what should have happened, and if this promotion ever gets greenlighted, I want credit for it.

The O Royals went a disappointing 63-81, which was the 3rd lowest win total among the 16 teams in the Pacific League.  On the plus side, nobody gives a squirt.


Kila was sort of the minor league equivalent of Manny Ramirez in that he ended up being the best hitter on two different teams. Of course, in Kila's case, the two teams were NW Arkansas and Omaha, so he didn't get quite as much press on the subject as Manny.

Even though he had a higher walk rate than anyone on the team and averaged one homerun per 10 at bats, (which was actually better than Manny), Kila didn't get the call to the majors until the very tail end of the 2008 season.  You would have thought Dayton would have been more inclined to call him up sooner considering:

1. An ineffective Ross Gload was manning 1B, and
2. Aviles had a monster season once he was called up to replace an equally ineffective Tony Pena, Jr.

But this was Ross Mother Flipping Gload we were talking about, so I can understand Moore's reluctance.   Let's also not lose sight of the fact that there's nothing about Kíla's name that would either imply or rhyme with an explosion, so there's no way he could have been as big of a fan favorite as Ross. (Wait, what about a "Kila-ton" bomb? Oh, well.)

If you were unfamiliar with the Royals and were just looking at this year's stats, you might wonder what the big deal is about Mike Aviles. In fact, you might think he sucks.

But last year was a different story, and Aviles was arguably our best player last season. Of course, his story began in Omaha, where, like Kila, he manhandled Pacific League pitching. While Aviles only hit homeruns at half the rate that Kila did, his slugging percentage was nearly identical, thanks in big part to a higher batting average and a much higher doubles rate.

Where he lagged behind Kila the most was in his ability to draw walks, only garnering one every five games or so. Critics/cynics who believed Mike's success was unsustainable pointed first at this low walk rate as evidence of a future decline. So far, those concerns have had merit, as Aviles has been terrible.

But we'll always love Aviles for 2008. And eventually, that love will turn to annoyance, then disdain, and then sheer, gutwrenching hatred... much like it did with Berroa in the years following his rookie of the year season. Speaking of which...

Didn't see that coming did you?

Okay, I'm cheating a bit here, as either Butler or Shealy should be in this spot.  But that would have ruined my cool Aviles-Berroa segue, and I just couldn't have that.

The other thing is that there's a sentimentality factor in play here -- nobody expected Berroa to ever perform well again, and that sort of underdog-ness made me root for him more than I normally would for another player.  (Am I glad he's with another team?  Yes. I'm not crazy.)

So while his raw stats don't compare to Butler and Shealy's, the fact that he performed well despite the fact that nobody believed in him, or even really liked him, and the fact that it helped with my literary transition, Berroa gets the nod at #3. Also, it gives me an excuse to post this photo: 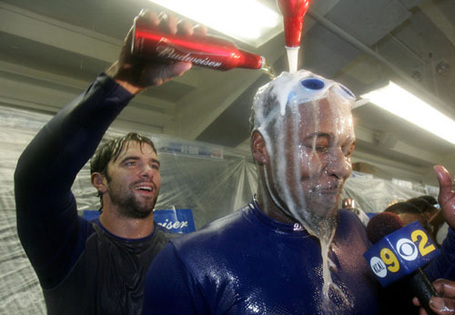 Either the Dodgers appreciate Angel as much as we do, or this was the most poorly-conceived Budweiser ad ever.  (via www.pe.com)

Hey!  It's Billy Butler!  No big surprise here, and nothing really exciting to write about that nobody hasn't written before. (How's that for a triple negative?)

It's sort of mind boggling that Shealy still doesn't have a spot on the 25 man roster, considering the success he had for half a season in the pros and two years in the minors, and considering what was at the time a rather large bounty required to bring him over.  It's also mind boggling because other guys that Dayton brought in via trade all got more of an extended shot than Ryan (Pena, Gathright, Gload), despite all having a worse pedigree and requiring less in the trade.  Sure, he sucked in 2007, but so did those guys, and they all got to keep playing.

I have an irrational man crush on Mike Jacobs, but I would have been perfectly happy to let Shealy man the 1B/DH position in 2009.  Having Nunez in the fold might have also spared us the pain of acquiring Kyle Farnsworth, and maybe that extra $4 million spent on Jacobs could have spent on something to spare us the pain of Sidney Ponson.  But there's no point dwelling on this now. The only real question is which of Shealy or Kaiihue gets traded first.

Sure, he was tater-ific while pitching in KC last season, but he was downright nasty as a reliever in Omaha. A 3:1 strikeout to walk ratio, over a strikeout an inning, and not a single runner allowed in 18 innings qualifies as a success at any level. His struggles in KC last year was a bit perplexing, as he hadn't ever shown before such a high propensity for giving up dingers, either at the minor or major league level. Let's hope he can get his career back on track, as he was a solid pitcher prior to last season's meltdown.

Here's another name you probably didn't expect to see on this list, but really, it's pretty typical of his career.  In what must be maddening for GMs, Jorge shows flashes of brilliance, only to eventually turn into a pumpkin once given enough exposure to ML hitting.

Colorado's giving him a starting role again this season, and I'm sure he'll last another month in the pros before eventually getting demoted, traded, or waived, only to be picked up by another team in search of a reclamation project.  But next time it will work!

I still don't understand why Rosa isn't considered the better prospect of him and Dan Cortes.  Of course, I'm not looking at this from a scouting standpoint, and yes, Cortes has the advantage (or disadvantage) of being younger. But from a purely statistical perspective, Rosa has easily bested Cortes in pure performance each year they've been in the system.

Rosa had one of the best K:BB ratios on the squad, and while his ERA wasn't that impressive, he did do a good job of limiting baserunners and avoiding homeruns. He's back in Omaha again this year, and thus far he's dominating, with a 3.27 ERA, 11 K's against 3 BBs in only 11 innings pitched.    Cortes, meanwhile, is sporting a 6.23 ERA, and 1.73 WHIP, although his peripherals suggest he's pitched much better than those numbers suggest.

Davies gets a slight nod over Lowery -- their numbers were very similar -- due to the fact that he was starting and due to a better walk rate.  But their other numbers, hits, homeruns, innings pitched, strikeouts, and runs allowed were almost identical.  If Lowery had put up these numbers as a starter maybe we would have found our replacement for Ponson in the rotation.  (It should be noted here that Jeff Fulchino actually had superior K/9, BB/9, and HR/9 than both Lowery and Davies, but he also gave up twice as many runs).