Royals Win a Wild One

Share All sharing options for: Royals Win a Wild One

Maybe the game of the decade tonight.

Quoting "Fernando Vina School of Linguistics" on this game:

so....we need to compile a list of the craziness in this game

1. DDJ not seeing the ball in the dome….Callaspo can’t catch it
2. Coco throwing a ball over 3b and into the dugout
3. Olivo with a triple
4. Bloomy with a HR
5. Bloomy with two steals
6. Aviles tangling his feet on an error
7. Aviles cutting off a 100 foot throw from left field
8. Aviles doing a cartwheel after reaching to try and catch a pickoff throw
9. Bloomy and Aviles not covering 2nd base on a steal
10. Span getting “hit” by a pitch that looked like it hit his bat
11. Butler getting hit on the jersey and NOT being awarded first base
12. Punto bumping an umpire and NOT getting ejected.
13. Olivo trying to steal home
14. Casilla fumbling the easy grounder to give us the lead
15. DDJ, Punto with actual webgems….Guillen throwing a guy out
16. Minnesota walking four guys in an inning to blow the game
17. Minnesota having to bring in RA Dickey, a knuckleballer, with the bases loaded…but he couldn’t throw a knuckleball because Mauer hasn’t caught him…so he had to throw 79 mph two-seamers.
18. TPJ with a one-handed swing after he injured himself on an earlier swing. 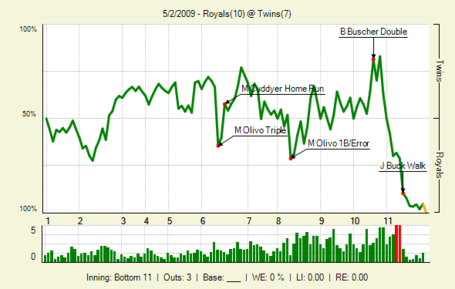