The Key for Zack Greinke in 2009: Eliminating the Longball

Share All sharing options for: The Key for Zack Greinke in 2009: Eliminating the Longball

Two interrelated factors have pushed Zack Greinke into otherworldly status this season: a rise in his strikeout rate and a steep decline in his home runs allowed. While the rise in strikeouts is an entirely 2009 occurrence, Greinke's batted ball data reveals that the severe drop in homers allowed is likely a minor stroke of good luck.

If you look at Greinke's numbers, other than the insane BB to K numbers, what should jump out at you is the zero home runs he's allowed. Over the course of his career, Zack's been a mild flyball pitcher and he's always given up his share of homers because of it. Last season, when Greinke was pretty damn good, he surrendered 21 homers. Interestingly, Zack closed the season with four straight homer less starts, which means he's now gone thirteen starts without allowing one. In those starts, he's induced something like 89 flyballs, none of which have gone over the fence. 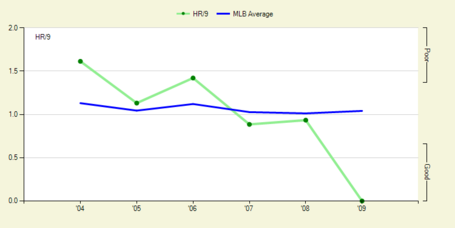 As you can see, Greinke has been improving, on the whole, in this regard since he came into the league. One of the old knocks on Greinke -- if you want to call it that -- was that he was always going to be a touch too homer-prone to truly be an elite pitcher. (Though if you're league average with regard to homers and good at everything else, you're still good most of the time.) Greinke ducked under the league average in 2007 and has remained there ever since however, though admittedly, not by much.

The good news is, despite a certain amount of mild luck in this regard, thanks to his increased K-rate (9.95 Ks per 9 this season, he began his career in the 6.00s) he's running up credits and debits on each side of the luck sheet simultaneously, if that makes sense.

For reference, here's one more graph, of Greinke's batted ball data. The interesting thing is that Greinke is barely different from what he was allowing last season. As someone once said, his comeback actually happened quite awhile ago. 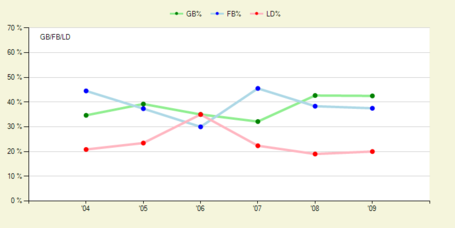 I don't think you can look at this data and conclude that Greinke's reached a point in which he's going to be a true HR miser. He's progressed to slightly being below the league average. It would be perfectly reasonable to expect that Zack might allow something like 10-12 homers between now and the end of the season. And while that increase will certainly raise his ERA and perhaps even produce a loss or two, the lesson -- and its better to hear this when times are good -- is that he's still a very good pitcher.

We now return to your regularly scheduled programming...

Until this season Greinke was unknown and hated baseball and had never done anything of note and then in March of 2009 Dayton Moore approached him on a raft off the Isles of Scilly and handed him a baseball then paddled off, and a month later Greinke returned to a mound for this first time since the late 1990s and now he's engaged to this girl and she's real pretty and he's just havin' fun out there and handlin' it all real calm like and easy-goin' and learnin' from the advice his ole pitchin' friends gave him and the rest is history.