Royals Drop Back Below .500 as the Davies Decline Continues

Share All sharing options for: Royals Drop Back Below .500 as the Davies Decline Continues

The mysterious Davies-Bannister body swap continued today, with Hiram turning in a vintage Banny 2007 performance, only without the BABIP luck. Davies's one strikeout performance was a disapointment, as it followed a semi-bounce-back outing against the Cardinals (7 Ks). Davies is averaging 2.8 strikeouts per start over his last seven starts. (I didn't feel like calculating K/9 by hand.)

Smart people... I invite your help on Davies.

The reshuffling of the division continues: Detroit at the top, Minnesota, KC and the White Sox essentially tied in the middle, then the Indians further back.

But hey, as far as we know Gibbons made it through a day as manager without getting into a shouting match with a player.

I'll give Jose Guillen a dollar to write, "the ship is sinking," on a wipeboard. What's the worst, err, best, that could happen? 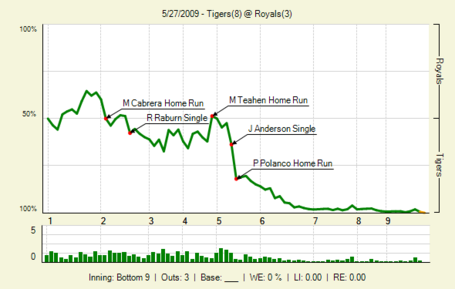