Kansas is the heart of the Royals Radio Network, with more affiliates than any other state. Better still, unlike many of the far-flung affiliates in Iowa, Oklahoma or even, sigh, Missouri, in Kansas, the Royals are the team. If you're a baseball fan in Kansas, you're probably a Royals fan.

Iola, Kansas lies two hours south of Kansas City in southeastern Kansas. Long the bitter rival of the nearby town of Humboldt, Iola is the county seat of Allen County and the county's largest city. Thanks in part to Iola's population, Allen County is the 33rd most populous of Kansas's 105 counties, with 14,300 residents. In 1910, the country was nearly twice as populous, with over 27,000 residents. Nobody knows where the vanishing midwesterners went to, though it is surmised that they sailed westward, perhaps with the help of Celtic monks, to a land beyond the sunset. John McCain won Allen County last fall with 61% of the vote.

Contrary to popular belief, Iola was not named after Iola Boyland, the beloved neighbor on the classic sitcom Mama's Family. Instead, Iola was the wife of one of the town founders, and the residents of the city supposedly chose her name as the city's in a vote. Because there's nothing that is more appealing to a pioneer than honoring a rich guy's wife. They love that. Really.

Iola's founding is generally dated in 1859, making 2009 the town's Sesquicentennial Year. Celebratory events began this last weekend, with the marking of Dandelion Day at the Gazebo on the Town Square. Various events are planned throughout the summer, including a Beard Growing Contest beginning in August. For a number of historical photographs of Iola, click here

In 1951, along with a number of cities in Kansas and Missouri, Iola was hit with a major flood, one of the worst of the 20th century. The Neosho River overran its banks, spilling into downtown Iola. 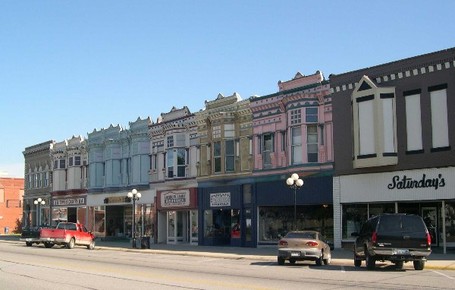 A good source for local Iola happenings is Iola.com. Iola.com has a pretty active message board as well, although do not post details about the Sigg Family there. Don't. Click here to read various answers to the question: "what makes Iola so special?"

Western writer Don Coldsmith was born in Iola in 1926. Coldsmith, the author of over forty novels, is best known for his historical westerns, many of which adopt the point of view of Native American characters. One of Coldsmith's most successful series is the so-called Spanish Bit Saga, a number of books set around the time of the introduction of the horse to North America. A medical doctor and a graduate of KU-KC, one of the best places to buy Coldsmith's work is at Town Crier Books in Emporia.

Iola is home to the Allen County Community College. Founded as Iola Junior College (which initially shared a building with the high school) in the 1920s, A.C.C.C. expanded to its current form in the 1960s. Home of the Red Devils (dance team= The Fire Starters), A.C.C.C. is a important part of Iola's community. 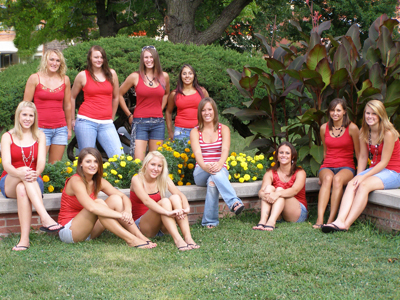 Members of the Lady Red Devil Volleyball Team listen to the Royals constantly on KIOL-AM.

One Major League player hails from Iola, Rick Kester, a relief pitcher for the Braves in the late 1960s. Born in Iola in 1946, Kester pitched at UCLA before signing with the Braves in 1967 (he was scouted extensively by a young Dayton Moore). A polished player, Kester appeared in five games with the 1968 Braves. All told, in three Major League seasons, Kester appeared in 21 games, posting an ERA of 5.98 in 40.2 IP, good for an ERA+ of 68. An arm injury ended Kester's career in 1972, and he is currently a high school coach in Nevada.

The network affiliate in Iola is 1370 KIOL-AM, "The Voice of Iola". In addition to the Royals, KIOL also carries the Jayhawks and Chiefs, as well as the expected helpings of Rush & Hannity. On Sundays at 11:00, KIOL broadcasts the services of the Iola Baptist Church. The station has broadcast since 1961 and is the sister station of KIKS 101.5-FM, "Iola's Radio Station!"