In a FanShot I stated the Soria was not getting the same amount of break from pitch to pitch. I decided to compare his results so far this year to Spring Training, the WBC and last using Pitch F/X data.

Here are some unrelated points to the on the game on 5/07/09, I found useful/interesting in my work and maybe some else will also:

For the above reasons, I am pretty much only able to look at the average differences in Soria's fastball until he has thrown more non- fastball pitches this season to look at those pitches. With his fastball, there is a major change from this season to previous seasons in that it is breaking ~2 more inches more in the horizontal direction. All of the other factors measured by Pitch F/X remain constant (e.g. speed, release, etc).. Here are his averages for the past 3 seasons:

As you can see, his fast is just breaking more, which leads us back to yesterday were Soria just seemed frustrated on the mound. His extra 2 inches of break on his fastball was putting his fastball out of the strike zone on few occasions. Here is a graph of his actual fastball and the location of the same fastball in 2 inches less of break: 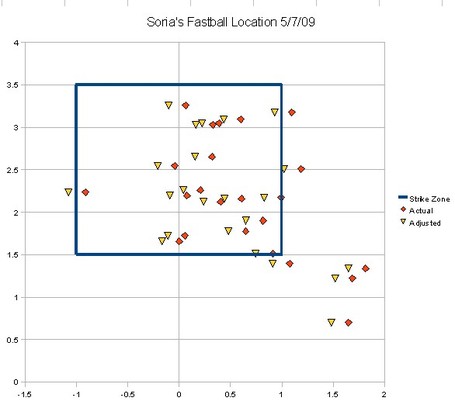 Although it might just be a strike or two difference during that in inning, it sure would have help with the way his was struggling. I am going to keep an eye on his pitches and will give an update in the future, especially after he has thrown enough non-fastballs to make some kind of good conclusion considering how variable he is with those pitches.