Meche, Bizarro Royals Offense vault KC out of the cellar. And we drafted Aaron Crow.

Share All sharing options for: Meche, Bizarro Royals Offense vault KC out of the cellar. And we drafted Aaron Crow. 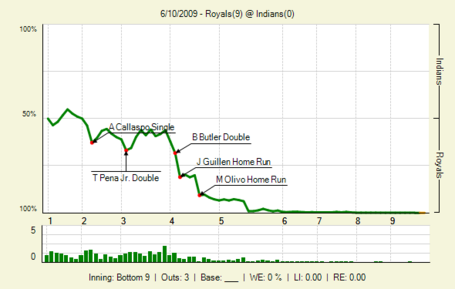 Well, that was fun for a change. Whereas last start for Meche was a good-result shaky-peripherals outing, The Epic was absolutely brilliant tonight. With 11 strikeouts in seven innings against only four hits and three walks, Meche made it easy on a Royals offense that hasn't been able to hit its way out of a paper bag lately. Except wait - the offense actually showed up tonight. Alberto Callaspo had the biggest night, going 4-for-4 with a Grand Slam. JoGui added a two-run home run as well. Carl Pavano was stupid enough to throw a pitch right down the middle as Miguel Olivo was closing his eyes and swinging really hard, and it turned out to be a home run too. DDJ, returned to the leadoff spot against a righty, had two hits. Teahen had a hit and a walk. Tony Pena Jr. somehow got a hit. Well hell, everyone who started got a hit except for Brayan "Heroic Sacrifice Fly" Pena. Even Luis Hernandez, who came in for Teahen, made contact with a baseball....with his bat!

Meche came into this game with a very good FIP, almost a full run below his ERA. While it may be strange to think given the good quality of his first two seasons as a Royal and the misfortune of the team lately, Meche might be better now than ever before. His fangraphs page shows his GB rate improving, his LD% down from last year, and he's only given up two home runs to date.

We had a pretty cool draft too, what with drafting Aaron Crow in the first round. Crow, you may remember, was a top ten pick of the Nationals last year but was not successfully signed. Since then, he's been in the Indy Leagues working on improving his changeup. For my money, Crow is a top ten talent that the Royals nabbed at 12. He's projected to be able to reach the front of an MLB rotation by most scouts, so it looks like a solid selection. Getting William Myers, a good catching prospect, and the high upside college pitcher Christopher Dwyer both seem like good picks as well. For the complete list of our picks, click the linky. And nwroyal should be doing an in-depth post on the Royals draft tomorrow.

Myers is probably already better at working a count than Miguel Olivo.