Nebraska is part of the Royals true homeland. Though its rather unfortunately empty -- Nebraska's population of just 1.7 million is significantly small, even by the modest standards of its region -- there are probably still more Royals fans in Nebraska than anywhere else in the United States, save for the obvious duo of Kansas & Missouri. Aside the inevitable and unfortunate disease of Cub-fandom in Nebraska, the Royals are clearly the team in the Cornhusker State, to a greater extent anywhere outside of Kansas. As such, Nebraska doesn't make for an especially passionate part of the fanbase, but it certainly is a reliable one, which perhaps is also a somewhat lazy analog for the state as a whole. Thanks to Nebraska, we can say with certainty that the Royals truly have a regional fanbase, and for that, at least one Royals fan is thankful.

An affiliate of large importance in Nebraska is McCook [1300 KBRL-AM]. The Royals only have nine radio affiliates spread out across Nebraska, and thanks to a decline in the number of affiliates since the team's glory days, McCook is now the western most outpost in the state, and one of the furthest west in the entire network. McCook is closer to Denver (270 miles) than it is to either Omaha (284) or Kansas City (418 miles), obviously. Essentially halfway between highways 80 & 70, it's also somewhat isolated. Though it's an obscure rite of passage for many Americans to make a cross-country drive at some point, most who pass through Nebraska will only marvel at places such as North Platte or Grand Island, missing McCook forever. McCook is only sixteen miles north of the Kansas border.

McCook is a large town by Nebraska standards, given that 89% of the cities there have fewer than 3,000 people. With a population of roughly 8,000 people, McCook is the 21st largest city in the state, just behind fellow Radio Affiliate, York. McCook is also the county seat and largest city in Red Willow County, the 24st largest in the state. The Red Willow County prefix is 48, so if you pull up behind some hottie with Nebraska plates and a random 48 somewhere in there, she's likely from McCook. The county prefix is such because in 1922 it had the 48th most registered vehicles in the state. No, really. This is the reason. Sarpy County, now the 3rd most populous county in the state, has a prefix of 59.

McCook is named for Alexander McDowell McCook, an Ohioan who served as a general for the Union in the Civil War. The town's tourism campaign proclaims McCook "Nebraska's Hot Spot" and by the looks of these climate maps, it's certainly in the running for Nebraska's warmest town, though my money would be on somewhere in the far southeastern corner. In addition to a number of city parks, McCook is home to a large downtown shopping district, where I'm sure Royals gear is plentiful. Outside of town, McCook offers close proximity to a number of rich hunting grounds. McCook is also home to a Frank Lloyd Wright house. 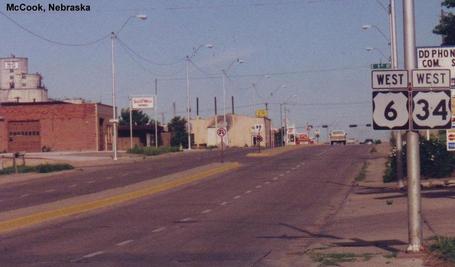 Aside from the Red Willow County Fair, McCook hosts two major events each year. This June 12-13, McCook will host the 13th Annual Buffalo Commons Storytelling Festival. For pictures from last year's festival, including a number of shots of McCook, click here. A number of the Buffalo Commons events take place at the historic Fox Theatre in downtown McCook, which first opened in 1927. After soaring around the world in your mind's eye at the Storytelling Festival, you can do so more literally at the McCook Ballon Fest, September 12-13.

Looking through Facebook groups related to McCook, there's not too much of note outside of what appears to be a buzzing resentment towards McCook HS Football: this humble searcher found both "Haters of McCook Football" and "McCook Football is a Cult". Apparently, McCook football has a larger coaching staff than the Cornhuskers, at least according to someone on "McCook Football is a Cult". Of course, having haters merely means one's done something, and in the last seven years the McCook Bison are 84-5, with two state championships and three other losses in the championship game. A look at last year's schedule reveals sheer and utter dominance, scores like 64-0 and 67-0, before a shocking 37-33 loss to Aurora in the state semifinal. If I know anything about these Bison, it is this: they'll be back.

Since 2006, Weiland Field, the home of the Bison, has featured a gigantic replica helmet, out of which the Bison stampede at the start of the game:

Gross admits that the helmet may be intimidating to opponents, but emphasized this morning that it was intended for the enjoyment of McCook's football players and fans. "No, we don't NEED it," he said. "But it adds to the atmosphere for the kids."Gross continued, "No, it won't help us win a game, but it will help keep the kids excited about playing Bison football." Especially the little boys sitting in the stands, dreaming about playing Bison football, he said.

In 1979 Rhonda Lundberg of McCook was crowned Miss Nebraska and competed in the Miss USA pageant, likely the greatest achievement McCook has seen on the pageant circuit. In the Miss America system, McCook feeds into the Miss Southwest Nebraska title. Though really, I have no idea. Sadly, I couldn't find a district map for how this all works.

Just north of McCook lies the Work Ethic Camp. Are you interested? Yea, I was too. My work ethic is horrible. Sadly, the only way into the Work Ethic Camp is to commit a non-violent felony in the state of Nebraska. Then you can work on your work ethic. What did I always hear growing up? If you criminalize work ethic, then only the criminals will have a work ethic. Or something like that.

1300 KBRL-AM is a new Royals Radio Affiliate, added prior to this season. At night, KBRL -- also home to Rush, of course -- covers a large chunk of a ten-county area in southwest Nebraska, and along with the nearby Holdrege affiliate, gives the Royals a strong coverage in the area. The leading source for local news in McCook is the McCook Daily Gazette.

McCook was once home to minor league baseball. From 1928-1932 and again from 1956-59, McCook was a part of the Nebraska State League. As the incredibly wonderful Nebraska Minor League Site writes:

Although McCook was one of the smaller cities in the Nebraska State League in 1956 they were one of the best towns in terms of community support. They were second in season ticket sales with 741 and led the league in attendance with 32,224 fans in the stands in 1956.
They were second in attendance in 57, third in 58 and led the league in its last year of 1959. The team was managed by Bill Steinecke for all four years. He had played for a short time with Pittsburg and was a manager and scout for the Braves. He was instrumental in signing Elrod Hendricks from the Virgin Islands and Phil Niekro, both of whom played for Steinecke in McCook.
The Braves were a farm team of the Milwaukee Braves and their roster was made up of Braves rookie prospects. The team tied for second in 1956, 6 games behind. In 1957 they fell to sixth. In 58 they came close but finished one game behind North Platte in the final standings. They won the league in 1959, four games ahead of Holdrege.

For more on that last McCook team, the 1959 McCook Braves, click here.

In a mild surprise, no Major Leaguer has ever hailed from McCook. Nebraska was a decent producer of big league players in the first half of the twenty-first century, but as far as I can tell, none of the 105 Nebraskans to reach the big leagues have been McCookians. Dave Hale, a DE-DT from McCook, played for the Bears in the early 1970s, and may be the only man from McCook to play in one of the major sports leagues. McCook's political lineage is richer however: three governors have been born in McCook, as well as current Nebraska senator Ben Nelson.