I'm not good enough to recount everything that went down. 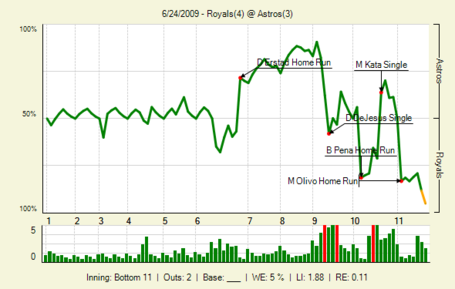 Jacobs & Olivo were huge late, as was DeJesus. And Bale. And like six hours ago Hochevar had his second best start of the season. I'm not sure what the plan would have been had the Astros tied it. I think Matt Tupman may have been involved.

Winning is funner than losing.

Get yer sleep boys, we got a day game tomorrow.

Great summary of the weirdness of this game by "Fernando Vina School of Linguistics":

1. Maier hitting a ball up the hill
2. Maier trying to get inside the parker (thanks Windmill Dave Owen) on it and getting thrown out
3. TPJJ getting pinch hit for in the 6th with Hulett
4. Farnsy going down in a heap after a pitch with what looked like a bad right groin injury
5. Jamey Wright not blowing the game
6. Jacobs with a “clutch” hit
7. Jason Michaels “catching” the ball from Jacobs off that crazy racquetball-esque side wall deal. Our BP catcher (and former interim manager) John Mizerock ran out onto the field afterwards to argue as well.
8. Carlos Lee trying to slide into 2nd and stretch his single into a double
9. Valverde’s insanely awesome raising of the hands when he pitches with nobody on base
10. Pudge and BPJ jawing back and forth about peeking back to see location of the pitch
11. BPJ homer
12. Byrdak staring down the Royals’ dugout as he walked off the field AFTER blowing the lead
13. Soria sadly not Mexecutioner-like.
14. Hillman odd double-switch to take out BPJ after controversy (Frank White said on postgame it was a weird decision—“let men be men and settle it on the field”
15. Fulchino “The Great Pumpkin-Head” throwing a first-pitch fastball to Olivo for go-ahead HR
16. Bale throwing 9 strikes in a row
17. TPJ, TPJJ, Bloomy ALL playing shortstop during the game.
18. Cecil Cooper saying the Royals “outplayed us” in his post-game interview. Is that possible?
19. Treydaddy said taking out BPJ had nothing to do with the argument with Pudge….which insinuates that we needed his one inning of defense (or he thought Soria could pitch two innings).