Soren Petro played the full-length interview with Brian Bannister that was first played on Rany's 810 WHB radio program Thursday night. This version has a few more minutes of Banny's commentary on resurrecting his career as a MLB-caliber pitcher.

Find it here: http://www.810whb.com/podcasts.
You can't see it, but it's in the list for "The Program" (the first show listed).  Just click on the podcast for Kevin Hartman or "2 Minute Drill" and a new window will open.
Then you'll be able to see their full list, which includes "Brian Bannister Talks Pitching."

The added parts focus on his history with throwing the cutter--learning it from watching Mariano Rivera, successfully throwing it in the New York Mets system, abandoning it, and then bringing it back this year after getting shelled in Spring Training and his first AAA start (hitting "rock bottom," as he describes it).  Still utterly compelling and refreshing to hear (for the second time).

By the way, here are the box scores from his AAA outings this season.

First start--prior to re-tooling his arsenal:

Second start--after "selling out" to the new plan:

Third start--pulled after two innings due to call-up

By the way, I loooooooooooove the completely unintentional--yet completely hilarious quasi-jab he takes at Dayton's much maligned way of indentifying "talent."

I'm not that familiar with all of the Pitch F/X data, but I thought I should head over there and check it out after Banny's comments. I was interested in a few of the statements he made. In the interview, he mentions replacing his 4-seam ("extreme fly ball pitch") with his cutter...which he said acts like Derek Lowe/Chien-Ming Wang's fastball and has "about four inches of vertical rise."  I went to Pitch F/X to see how accurate those comparisons were.

...hmmm that does not appear to be "about four inches of vertical rise."  More like six or seven inches. Am I missing something?  The more I looked at these individual pitching logs, it looks to me like perhaps the Pitch F/X lasers were confusing his cutter with his slider. In some of these games it was saying Banny threw over 50 sliders and less than 10 cutters, which doesn't seem right....especially when it was saying his slider was moving in on right-handed batters (a negative H-Break), which would be the opposite break a slider should have (Juan Cruz's cutter has like 7 inches of break away from a righty).

So perhaps some of his cutters are being mixed in with the slider grouping. I'm not sure.

He also mentioned his change-up getting down in the "Brandon Webb range" for sink, allowing hitters to swing over the top of it for ground balls. Skeptical? Let's see how they compare, using 10 of Banny's 2009 starts with 10 of Webb's 2008 starts (since he's injured this season).

.....pretty good comparison, eh?  In fact, almost all of the elements of Webb's devastating sinking fastball are present in Bannister's changeup.  In most instances that I viewed, Bannister's changeups are 2-3 mph slower than Webb's fastball, and  they may have about an inch less break going into a RH hitter, but they seem to be very similar to my untrained eye. Definitely a pitch I would want in my arsenal.

Graphs for every Start: 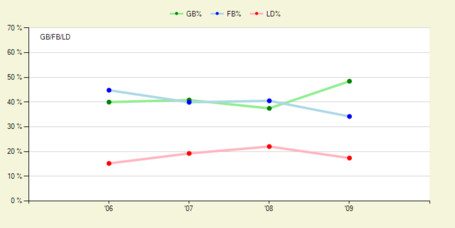 Vertical Break on Pitches by Year: 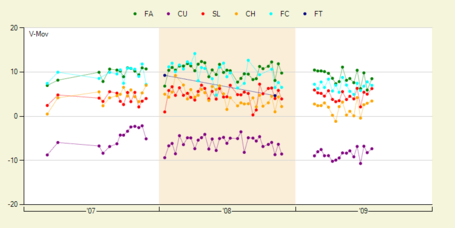 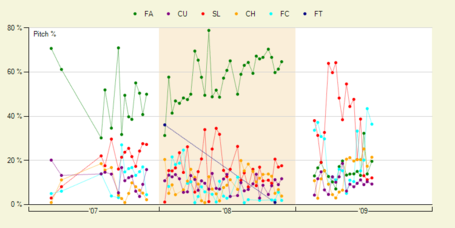