In the end, as was the case in 2008, the Royals sat on the sidelines at the trade deadline.

The best trade chip the Royals had -- aside from doing a really smart thing and trading Joakim Soria -- was probably Brian Bannister. Bannister has now had two good seasons out of the last three, with a clunker in between, and is now in the arbitration phase of his career.

A deal was never offered that Dayton bit on. Now the Royals continue on with Bannister, Mark Teahen, Willie Bloomquist, Ron Mahay, and all the rest.

Bannister is an interesting case of an established Major League player that, nevertheless, no one quite knows how good he is. For all the talk that Bannister generates about his approach, his use of advanced stats, his roots in the game, his Christianity, and the like, you can see a lot about him at any given moment by looking at his home run rate. In 2007 and 2009, its around 0.8-0.9 per nine innings. In 2008, when he was one of the worst starters in the American League, it was at 1.4 per nine.

Part of that drop in homers allowed has been Bannister's increased ability to get ground balls. 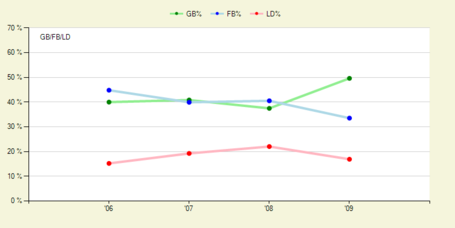 Where the Yankees really crazy to offer almost nothing for Bannister? I like Bannister as a long-term piece for the Royals, but he's a small uptick in his flyball rate from being a real problem in the AL East, especially pitching in the new Yankee Stadium.

I've been repeatedly critical of Moore's decision to play for the immediate present and future since 2007, and because of that mentality, he's now more or less committed to it. Dayton's boxed himself in with this roster, and is now stuck with it. It's a mistake built on mistakes, which continues to produce more mistakes, but there's no turning back now.

So let's hope for the best, I guess. Maybe Brian Bannister can be a part of it.