Willie Bloomquist has four homers this season because he's playing more than he ever has and he's trying to. He's failing at everything else: getting singles, getting on base, whatever. But he's succeeding in hitting more homers than ever. He's Willie the flyball man.

And it's worked. He hits one home run a month now. Oh the glories.

Willie Bloomquist homered again last tonight, his fourth of the season. When Dayton Moore signed Bloomquist this offseason, one of the main knocks against him was that he simply did not have enough power to be an everyday player. In 2008, Bloomquist managed just one extra base hit (a double) in 192 plate appearances. So with four home runs has Willie proved us all wrong?

First of all, let's not go crazy here. Bloomquist, after all, is still slugging .358 the morning after one of his rare home runs. The lowest total of any regular player on the team. He still has a strange inability to hit doubles (5), which makes his modest homer surge all the more curious. Yes, he has seven triples, but so does the despised David DeJesus, who also has seventeen more doubles and four more homers than the Saint. Overall, a huge explanation of what is going on here is the mere fact that Bloomquist is playing more than he ever has before. He has 333 PAs this season, fifty more than his previous career high (283 in 2006) and we're still in mid-August. Willie's slugged around .330 three times in his career, and he's essentially a wall-scraping homer better than that this season.

Actually, what stands out as the odd season in the annals of St. Willie Bloomquist the Beloved, is not 2009, when he muscled up and carried the Royals to a glorious season, but 2008, when he actually did something well at the plate for the first time in his career. In 2008, Bloomquist posted a .377 OBP, a number he had never even remotely sniffed before. Don't worry, as a Royal in 2009, he's back to an unacceptable .303.

Would you be stunned to see that a Royal has a collapsing walk rate?

Here's Willie's walk rate data. (Note that in 2002 he only played in fifteen games.) 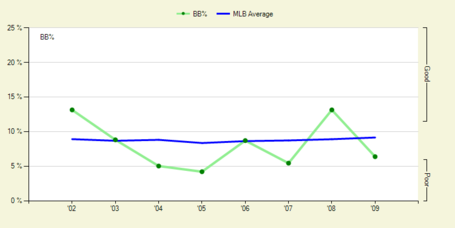 Bloomquist is a frustrating player to many people not just because he's overrated, but because he seemingly is unwilling to take advantage of the one thing he's good at, stealing bases. He won't (or can't) walk much, and only once in his career has he been an actual "OBP guy". No, he's an out-machine. Moreover, he's a flyball hitter, which is precisely what he shouldn't be. Of course, he tags up well from second, so he's still a smart player, but a guy with plus speed and minus power should not be flying out lazily to right twice a game. Yet here we are. 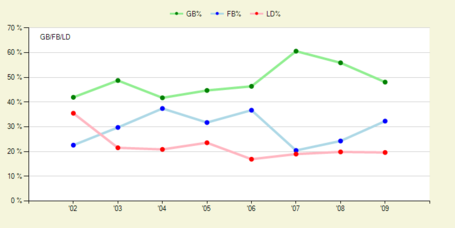 Bloomy's FB% this season is 32.3%, his highest total since 2006. In some ways, you might consider him Mike Jacobs without the power.

As I've written about before with Bloomquist, I just don't understand why this is so hard. He's an all-batting average guy, but he doesn't even hit for a high batting average! He's batting .257. He has never hit .280. Forget that it's an empty .257, because for the parties in question that doesn't matter. .257!

Yes, Willie can play a variety of positions. Well, play in the sense that he can be positioned in a variety of positions (his overall defensive numbers are still bad). However, despite four flyball homers, 2009 is not even his career season. His wOBA this season is .299, right in line with his other campaigns save one. In 2008, Willie actually was an OBP guy, and he posted a vaguely kinda sorta almost acceptable wOBA of .321.

If we must have Willie Bloomquist, bring back the flukish 2008 edition.