Some of my more fervent fans may have noticed I have not been posting for a few days. Well that has been because I have taken my first trip in two years (let that be a lesson to those of you wanting children) and I traveled to the beautiful state of my birth - the state of Michigan, home of the first place Detroit Tigers.

In my time there I was fortunate enough to attend a Tigers game with a good friend of mine, and as luck would have it, we were able to watch my hometown Royals. Here is my review of Comerica Park. 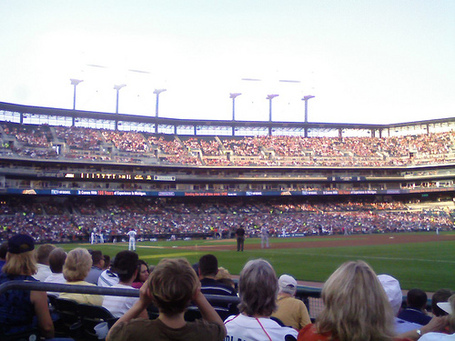 Our seats had a terrific view of Royals pop outs, and the Royals were more than happy to produce many for me to view.

I think when most people think "Detroit" they probably think of a fire-bombed, desolate, dangerous inner-city with buildings constantly on fire (where is Robocop when you need him?). That may well be the case, I don't know, but the area around Comerica Park is quite pleasant. Ford Field, home of the Lions, is right next to the ballpark (it is possible to have a sports complex downtown!) There are two nice theaters across the street including the historic Fox Theater, recently renovated. There are also an ample number of bars with excellent outdoor patios to enjoy a beer in the cool Michigan summer evenings (although it is telling that the coolest-looking and most popular bar is a Red Wings bar called "HOCKEYTOWN".)

Parking is an absolute breeze and we paid $10, the same as you would pay at Kauffman, to pay in a lot about two blocks from the ballpark. Getting out was a breeze as well. To be in a downtown setting with a mass of people all around you is really quite an experience. I bravely walked with my Gil Meche t-shirt on, but I was really impressed that nearly every Detroiter I saw sported Tigers gear.

The stadium exterior is pretty impressive, and I kinda liked how it fit the city block, and looked less like a ballpark. They have toothbrush lights, which should be mandatory for all stadium. The entrance is grand, but the walk-up to it is really awkward, with visitors having to traverse the VIP parking lot, with not enough room for large crowds to walk-up all at once.

There is a huge statute of a tiger out front, and large statutes of tigers on top of the scoreboard, which is a bit cheesy, but at least iconic in a way. They also have a ferris wheel and a carousel which is fine for the kiddies I suppose. When you walk in, you are greeted by a large food court with lots of different food options ranging from Chinese food to Little Caeser's pizza. Neither of those sounded all that appetizing, although there were some chili cheese fries that looked artery-busting good.

We settled on some hot dogs, which were just terrific. The price was slightly more expensive than at the K, but it was well worth it because the dogs were not only bigger but came with free grilled onions. My friends, everything is better with grilled onions.

I liked that the dogs were plentiful in kiosks around the stadium, as well as beer, but if you want anything else, you will really have to search for it or go to the food court. It was quite a walk to find some nachos, and when we got there the food options were pretty limited.

Our seats were down the third base side near the outfield and gave a tremendous view. Alberto Callaspo missed a pop up near our seats, then jokingly pretended to eat the popcorn held by the kid in the front row. Oh Alberto, losing baseball games will never get you down!

The tickets were a bit pricey, but I am probably spoiled by dirt cheap games for a loser team. The Tigers are actually in a pennant race, so I expected the seats to be a bit more.

The scoreboard is actually a bit disappointing. It has three screens, and appears to be out of the 80s. The first panel has extra information on players. And it goes out of its way to praise Tigers players and mock opposing players. Like Miguel Cabrera is hitting .429 against Zack Greinke in night games, but Billy Butler is hitting just .198 in August games against Central division foes with runners in scoring position. BOOM! ROASTED!

The second screen is a small video board, but two panels are already out, and they don't ever show replays. Ever. The third is just a black and white screen with just basic information - AVG/HR/RBI, and for some reason sacrifice hits. Small ball is important to Tigers fans.

They do some goofy stuff between innings like "find the baseball", but it seemed like they had half the goofy stuff Kauffman had, which I appreciated. There is no goofy in-stadium host who makes you want to punch someone, like our own "Tim". They do have 18 year old girls dance on the dugouts like we do and a mascot, a Tiger I wanted to call "Tony", but his name is actually "Paws."

The concourses are pretty wide and you can walk all the way around the stadium. You can even stand and watch the game from the outfield. There is also a nice skyline of downtown Detroit including the iconic GM headquarters, which you can throw spoiled fruit at.

The bathrooms however, are already showing their age. They looked like they had been imported from old Tiger Stadium.

We were treated to a terrific pitchers duel - Greinke vs. Washburn. I joked that between Greinke and the Royals lineup, we had a great chance of watching a no-hitter. Which was very nearly true. The two teams took a 0-0 tie into the bottom of the ninth, upon which I went into a drunk-induced rant on why you bring your best reliever into a tight game because you may not go to extra-innings otherwise. Right on cue, Roman Colon gave up a walk-off home run to Brandon Inge. It was too predictable.

Tigers fans went wild, and I must admit, it is cool to see a walk-off, even if its against your team. And they played Daft Punk's "One More Time", which is a pretty cool song to hear after a guy hits a walk-off home run.

All in all, I had a terrific time in Detroit. It would be a shame to see this country abandon what was once one of the most important cities in the world.

Thoughts? Has anyone else visited Comerica?