Byrd's an interesting character: he's a beloved former Royal from the bad old days, who has now played for approximately seventy teams. He's a hardcore religious type who is always eager to talk about how important his family is to him, then return to baseball three months later, ready to, umm, not be with them. And, he remains one of the strangest characters in our PEDs obsession, when it was sorta revealed during the 2007 ALCS that he used HGH years ago, only to have Byrd defend it by citing an illness no one seems to have known he had. If Paul Byrd really had a brain tumor, wouldn't that be an amazing story that we'd have to hear about constantly? No one ever talks about any of it of course, because the hysteria is really only reserved for guys who everyone already hated.

Still, he destroyed our national innocence, and ruined the childhood memories of millions of fans by tainting our holy game by using PEDs. 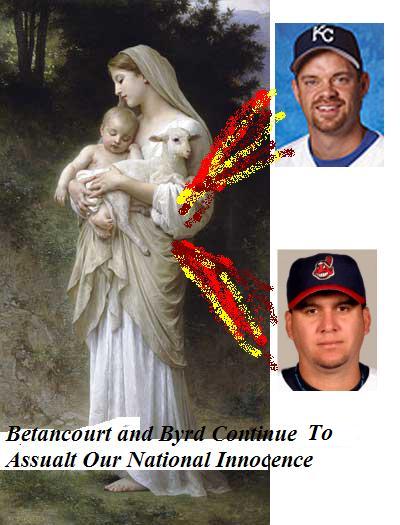