Fans of "Its Always Sunny in Philadelphia" have learned this year, among other things, that apple seeds are poisonous, and there is a foolproof system of getting women to fall in love with you, called the D.E.N.N.I.S. system, named after its creator, Dennis Reynolds. 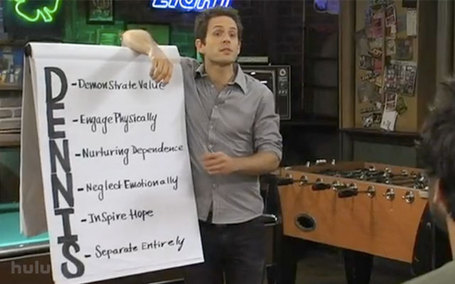 Less known, is the D.A.Y.T.O.N. system, named after its creator, Dayton Moore. This foolproof system results in nothing but championships. Feel free to take notes.

It is essential to inspire hope in your fanbase. The fact you are not your predecessor will elicit dreams of World Series parades, preferably in the Plaza. Talk about a new attitude, convince management to increase the budget for player payroll and amateur talent, and most importantly - get players to wear their stirrups the right way! It is important to make lots of superficial changes, because that is how people will realize you, unlike your predecessor, are serious about winning ballgames.

Do what you know. Why scour an entire league for talent when can simply rely on players you know that weren't good enough to play with your old organization? There are like 28 other teams! That is WAY too much work. And you have a World Series parade to prepare for. Time is money! You probably know all their strengths - assuming they have any - and their many weaknesses. Better the devil you know, than the devil you don't know, right?

Now that you've assembled a crack scouting department, yield to them in every way. There is no more accurate instrument known to man than the human eye - just ask any trial attorney! Who better to rely on than a former gym teacher in Modesto, California making several hundreds - even thousands of dollars per year when it comes to the future of your organization?

T - Talk About the Future

Its important to have timelines. That way, no one will expect you to succeed now. If success is always out in the horizon, you need not be held accountable. And lots of things could happen between now and then - fluke winning season, scientists are able to clone Albert Pujols, the world ends. It also important to talk about investing in the future, but that does not mean you have to fully invest in the future. Feel free to give up draft picks for free agents, or spend your budget on marginal MLB talent rather than paying top dollar for the best amateur talent. The temptation to try to build an 85 win team is too enticing for any GM to pass up, so don't deprive yourself the opportunity to build a mediocre ballclub just because some 16 year old Dominican can throw 95 miles per hour.

Its not just the big money teams that are overpaying for free agents - small market teams can do it now too! Why sit on the sidelines and let the Mets make all the splashy headlines when you can make foolish contract offers too? It doesn't matter if no one else is bidding on the player you want - overpay anyway! It will show everyone you are serious about winning. You can also take advantage of the irrational shift in the market towards player who are good at reaching base or playing defense and pay top dollar for "guys that play the game the right way." That's right - baseball players. There is no metric for grit, and having a team of "gamers" is sure to lead your team to victory!

Name one spreadsheet that has ever won a World Series ring. Can't do it because spreadsheets are inanimate objects. Inanimate is a pretty fancy word - you're not one of those stat nerds are you? Good. Because those guys are too busy sitting in their mom's basement to notice that baseball is played by baseball players. It is important however, to not only neglect statistical evidence, but to sneer at the mere thought of using statistical evidence. Feigning (or genuinely) showing ignorance will show other GMs that you are not only a gritty scout guy, but you are one cool dude - not one of those stat nerds. Its like high school. What prom queen ever went home with the President of the Math Club? None. No one ever made it far in this world by learning math.

So there you go. Follow these steps, and you too can become a championship General Manager. Again, those steps are:

T -Talk About the Future

Learn it. Love it. Live it.