Share All sharing options for: Can Juan Cruz Bounce Back in 2010?

Heading into 2009, Juan Cruz was supposed to be the team's second best option out of the bullpen. Instead, amidst struggling to stay healthy, he turned in one of the worst seasons of his career.

Items that may or not be relevant:

Each of these points are facile and purposefully misleading. Each of them simplfies and overstates. Look at the third point: we all thought that nobody signed Cruz because of the draft compensation penalty. Nevertheless, when you look at them together, it isn't hard to retrospectively see that Cruz would take a step back in 2009. Maybe that draft penalty was 80% of why everyone else shied away, but, relatedly, we can also see that that's only part of the story. Those other teams didn't think that Cruz was good enough to justify the price/penalty.

Looking closer at Cruz's 2009, we see that the advanced stats mostly reflect what the Murray Chass/Karl Ravech stats are saying: Cruz was simply worse in 2009. His BABIP and related numbers weren't noticeably out of line with what he'd posted before.

Cruz has always posted high walk totals, but during his good seasons he's been able to more than make up for that problem by striking everyone else out. In 2009, his K-rate collapsed. 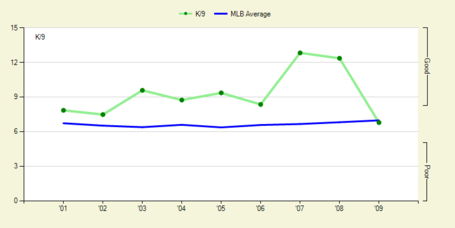 So much for Dayton's "power arm" strategy for the 2009 bullpen.

It would be folly to bury a reliever because he had a down season. There's too much randomness inherent in their activity to do so. That being said, what stands out in the graph above is just how much Cruz's 2007-8 run was his true peak as a strikeout pitcher. I'm tempted to say that that stretch coincided with a real bottoming out of talent in the National League, as well as the late 20s period that we've generally associated with a baseball player's performance peak. Ok, I did say it.

Cruz has been a tantalizing player since his days with the Cubs and he's posted some truly insane numbers at the minor league level. However, for all that jangle, from 2001-2006 he was exactly a league average pitcher according to the problematic ERA+, a poor figure for a relief pitcher. Over those 402 Big League innings, Cruz struck out 8.4 men per 9 innings, but also walked 4.5, which is how he turned into a guy that three teams thought they could fix, and three teams thought they could do without.

In 2009, Cruz was even worse than his previously established level of mediocrity.

It would be easy to say, "RPs are volatile, Cruz is a decent bet to bounce back in 2010". Unfortunately, I don't know what he's going to bounce back to.