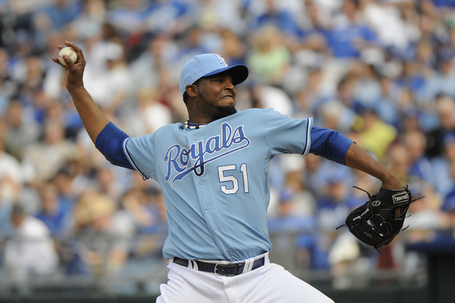 Telling the difference  between Robinson Tejeda's change up (a palm ball seen above) and his slider is quite difficult, but it can be done.   The difficulty in determining the difference was brought up a couple days ago by Mike Fast when several of our readers noted that I mentioned that Tejeda doesn't throw a slider.    By using some of Mike's previous work, the pitches can be correctly classified.

Warning: This subject matter is pretty boring and difficult.  I have problems at times understanding all the concepts and I even spend hours in my mom's basement blogging about baseball.

In 2010, Robinson has data available on 1027.  Here is the break down on the number of pitches of each type when label by MLB (Google Document of all the pitches):

Here is the correct method I should have used to classify the pitches.  There are several methods to help classify pitch type and here is a great writeup on the Sons of Sam Horn wiki on several of the methods.  At the end of the article, there is an example of putting the pitches into buckets according to spin angle and pitch speed which is probably the easiest method.

Using the information of SOSH wiki, which they stole from Mike Fast, I went ahead and calculated the spin angle (column AL) of the spreadsheet.  The following image is of the spin angle and ball speed.  I have gone ahead and circled the different pitch types (and ignoring the FF and FT differences for now). 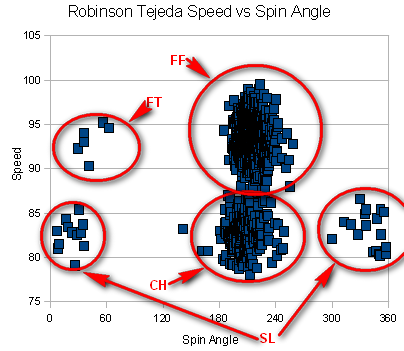 So after reclassifying the pitches (column AI), the number of each pitch ends up as follows:

About 25 of his pitches were misclassified as change ups by MLB.  In the future, I will make sure that the pitches I use are correctly classified.  MLB was supposed to be labeling the pitches better in 2010, but that wasn't the case here.  It is still not a huge amount of sliders thrown compared to the other pitches, but it is always better to use the correct data.