Share All sharing options for: Royals UZR/150 Projections for the 2010 Season

Earlier this year I released my own set of UZR/150 projections.  Now that the Royals have finally set on the basics of a roster, let's look at how the players project to do defensively this season.  Here is a list of how each player projects to do at each position they have played previously over the last 4 years (link to a primer article on UZR): 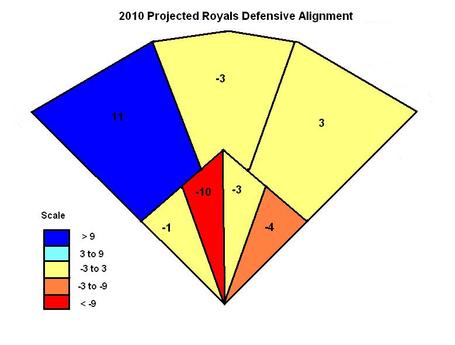 With Gordon out and Callaspo going to 3rd and Getz to 2B, looks like the defensive may improve.  I might do more of these graphs depending on what kind of lineup Hillman and Moore continue to think up.