Is Gil Meche's Fastball Back?

Share All sharing options for: Is Gil Meche's Fastball Back?

Note:  Only the Surprise and Peoria facilities have the camera set up for Pitch FX data.  Pitch information will only be available at home games or away games versus the Padres and Mariners.

I was worried a little about how Gil Meche's fastball would hold up after it lost a few ticks at the end of last season. The following is Gil's velocity chart from FanGraphs.com show Gil's fastball velocity's over the past 3 seasons. 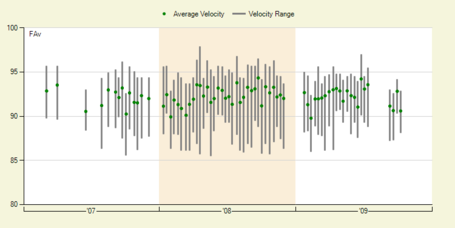 It can be seen that Gil's average fastball velocity hovered around 92 to 93 MPH last year until he was injured.  After he came back from the DL his average velocity was around 91 MPH. After four starts he went on the DL until the end of the season.

Today, of the 40 pitches Gil threw, 23 were fastballs. The fastest one reached 94 MPH, while the slowest reached 91 MPH for an average of 92.26. It looks like Gil is near is pre-DL fastball speed, but I will continue to track it.

Gil did seem to tire in the 40 pitch outing. Here is a graph of his fastball speeds along with the order the pitches were thrown. 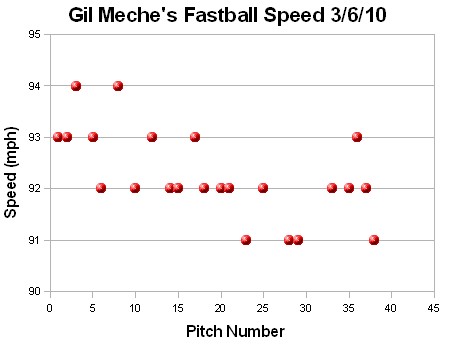 Gil's fastballs during the first 20 pitches (92.7) averaged being 1 MPH faster than fastballs throw in the last 20 pitches (91.7). This trend will be interesting to follow over Spring Training to see if Gil is just building up his stamina or his fastball slows as he goes further into a game.