Share All sharing options for: Soria and Leverage Index

I planned on doing this piece before that debacle Tuesday night as I usually write my pieces while listening to the game the night before they run. I am sure that Hillman's inability to bring in Soria will be discussed to death, as it should be. That game was sickening.

If the rest of you are like me, the bullpen exists of Soria and a rotating pile of dung. Not one of the relievers is considered a real setup man. With this situation, Soria needs to be used whenever the situation is most critical late in a game.

Leverage Index is a stat that is used to show how important the situation is at that time.  The Leverage Index is higher late in a close game with players on base and lower early in a game or during a blowout. Recently a reporter asked Hillman why he didn't use Soria in a high leverage situation and here is his response:

"There's a thought there but, No. 1, it's a very unusual time for Joakim Soria to pitch in a ballgame. No. 2, you've still got those same bats coming up in the ninth in a higher-leverage situation - because it is the ninth, even if there are no runners on base."

The reaction on this exact quote was already discussed, but I want to see if Soria is being used in the highest leverage situations.  Fangraphs tracks a pitcher's average LI and here is the season values for the relievers

Well, besides Bruce Chen's game a couple of days go skewing his data, Soria, on average, has be used the most in high leverage situations.  I graphed all the games and the pLI for all the relievers, but Chen and Rupe because of the recent call ups (This is the first time I have used this chart and is a work in progress). 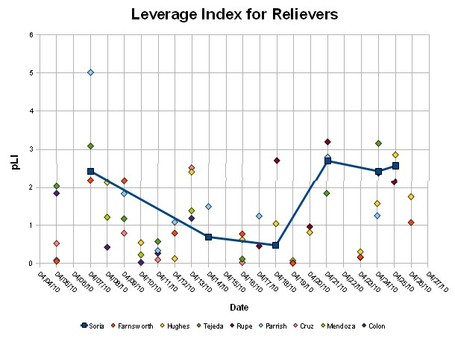 Using Soria only in the 9th is the safe bet for Hillman because he can show that Soria is used in High Leverage situations. He needs to start looking into situations where Soria can be used when the game is more on the line.