Career Retrospective on Some of the 2000 Royals Batters

Share All sharing options for: Career Retrospective on Some of the 2000 Royals Batters

Recently in a thread over the Royals section at Scout.com there was a discussion that Damon is getting near 3000 hits.  The 3000 hit milestone usually means the player will get heavy consideration for the Hall of Fame.

This got me thinking of the respectable offensive teams the Royals had around the turn of the century. I decided to compare the careers so far of 5 hitters from the 2000 team, Jermaine Dye, Mike Sweeney, Joe Randa, Carlos Beltran and Johnny Damon.

The following graph compares the seasonal WAR (Rally's data) of the 5 players, looking at the players best season to the worst (lifetime total WAR is in parenthesis). The gray band is literally the "gray area" that marks the area where 20% to 50% of the elected players in the Hall of Fame fall between. Historically, anyone above this mark is a sure fire Hall of Famer while anyone below it has very slim chances to make the Hall of Fame. 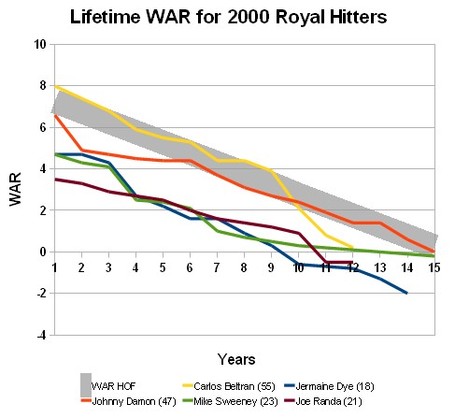 These players got brought together after seasons of having no hitting and decent pitching. That team scored 879 runs (all time team record), almost 200 more than each of the last three teams, but they allowed 930 runs (another all time team record). Same usual story, even when the Royals are at their best, they are still losers.