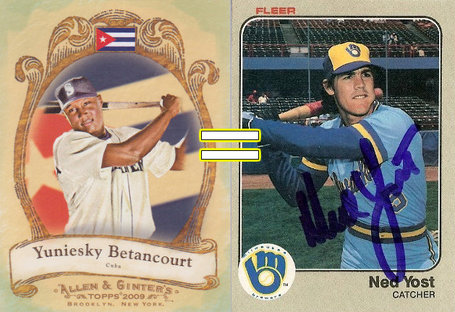 While perusing fangraphs newest lifetime WAR graphs, I came upon a startling discovery: Yuniesky Betancourt is startlingly similar to our new interim manager Ned Yost in several ways.  For example, they are both currently Royals.

However, if we remove that fact from the equation and simply look at their playing careers, some odd things begin to jump out.  These results may surprise you, but it is very well known that graphs and numbers do not lie.  Take for example this graph depicting the best WAR seasons for each player in question: 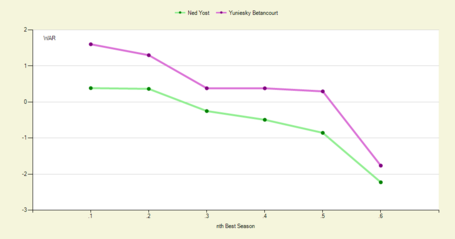 Startling is the word I would use.  It appears that Yunieski was approximately worth one more win during each of their comparative seasons. However, it's almost like looking in a mirror that way the graphs have the same slope and same dips along the way. This cannot even be explained by positional differences, as Ned Yost played a more difficult position (catcher).

Another chart that has striking similarities are the WAR numbers by age: 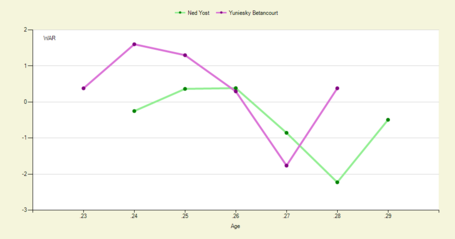 If you were to move Yost's chart to the left my one year, the slope and movement of the lines would look almost exactly the same. However, if we move on from the WAR charts, we can find even more in common.

Take for example their fielding statistics.  Unfortunately, we must use Total Zone (TZ) due to the age of Ned Yost's statistics, but they too show a startling trend: 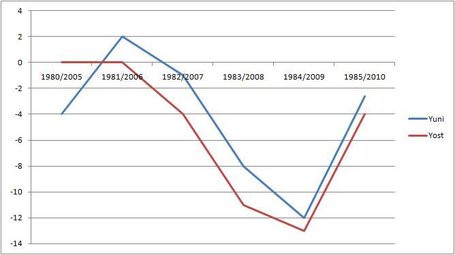 Note: For Betancourt in 2010, UZR data was used

I was skeptical of just how related these two samples really are, so I performed a very necessary paired two sample t-test to see the correlation.

As you can see, the Pearson Correlation is at .88, which means they are very highly related. You know this is reliable due to the high degrees of freedom (5) and by the fact that catcher's defensive metrics are reliable.

The similarities do not stop there. Here is a list of other things eerily related:

Does anyone have any idea what this could mean to the Royals?  Did I miss any similarities?  Did I use the word similar/related too many times? Is there actually a point to this fanpost?