May 27, 2010. Johnny Rosenblatt Stadium. Dollar beer night. What started as a drunken whim near the third-base dugout became an ironic metaphor for the career of Kila "Archibald 'Moonlight' Graham" Ka'aihue.

So there we were, I and a group of friends and family, enjoying Thirsty Thursday. We were many and we immediately decided to build a beeramid with our refuse. A few innings later it was already a monument to humanity, when suddenly a baseball came sailing out of the dugout and destroyed it. One of the ground crew members was the culprit. In spite of the cruelty alotted us by the gods, we pressed on and rebuilt.

A few innings later, it was a grand beeramid indeed, with a five-can-per-side base and nearly complete on top, when another baseball flew out and smashed apart our dreams. This time it was either Irving Falu or one of the O-Royals coaches - we weren't sure. We secured the ball and pressed on again.

Finally, late in the game, after strangers in the section had pitched in with their own proceeds, behold our triumph: 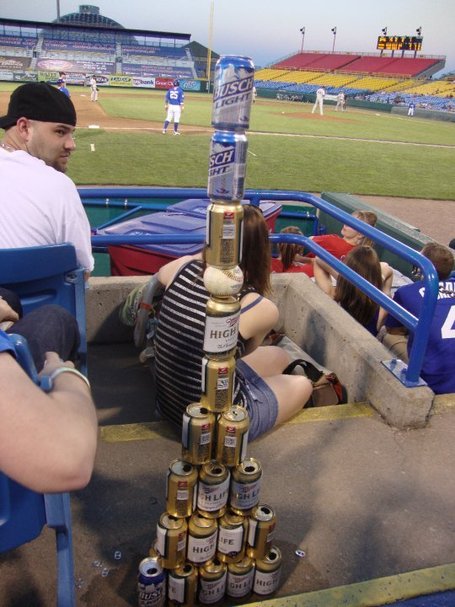 Yes, we took one of the baseballs that had stung us, and used it to complete a masterpiece. Yet one final time, a baseball flew out and shattered it. This time we were vigilant, and we saw the culprit running away and laughing: none other than #15, Kila Ka'aihue.

As our art lay in shambles on the ground, I reflected on how closely it represented him. It had a firm foundation, solid progress, and finally blossomed into the best damned beeramid you could hope for... and then all its potential was constantly wasted by powers on high. Maybe that was why he destroyed it. I couldn't really blame him.

On the other hand, Kila, we will never forget nor forgive what you did, you bastard.