So Jose went off on his team through the press again. Here's the original article. Not that it needed it, but we analyze Jose's statements after the jump.

Side note, glad to see Jeffrey Flanagan back on his feet working at Fox Sports Kansas City. And look, he's got his own graphic:

Guillen, who is finishing out a three-year, $36 million deal, acknowledged that it's tough not knowing what his future will be over the next few weeks.

But if Guillen's days are numbered in Kansas City, he said he will leave with mixed feelings.

"It's been good to me in a lot of ways and not good in some ways," he said. "I will tell the truth. Truth a lot of times hurts."

Remember when you threw a fit your fit your first season and tried to attack the fans? You later said that you didn't want to play in front of the Kansas City fans anymore. Never forget the good times, Jose.

The truth, Guillen says, is that when he arrived in Kansas City he walked into an organization that had the wrong attitude.

Well, they did assume you were going to happily play left field. It's not like you forced their hand in an embarrasing moment at a fan event.

"This organization when I came here, it was not what I thought it was going to be," he said. "The atmosphere. I was expecting a lot of fire and winning attitude. And it wasn't any of that.
None of that.

He's got a point here -- I'm not sure what happened to the winning attitude. The team had been chugging right along before he arrived.

"I tried to say some things and do some things to change the atmosphere and then people went 'Oh, here goes Jose Guillen again.' But, hey, I don't like to babysit guys. You try to tell young guys some things, they get their feelings hurt. That's Little League stuff."

Since this is clearly about 2007 and Jose's "babies" rant not so secretly directed at Billy Butler.

The Royals' biggest sin as a team?

"Fundamentally, this is one of the worst teams in all of baseball. This is true," Guillen said.

Jose hasn't had a positive UZR rating for his defense since 2006 (although, it's only -0.2 in an extremely small sample size for 2010). Then, there's stuff like this: 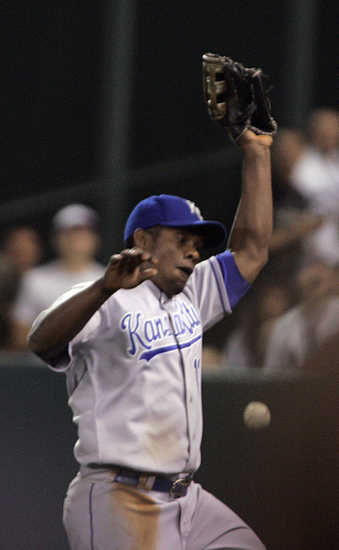 But wait, maybe he was just talking about offense...

"I've been here for three years. I know everything that's going on . We're one of the worst teams fundamentally. Why do we get 14 or 15 hits and we score one or two runs. How does that happen? Lack of concentration. Lack of being smart.

Well, that and lack of extra base power. Pods and Kendall may provide decent OBP, but they're not getting themselves to second by their bats very often.

Oh, and there's the whole picked off / caught stealing thing. That wastes some runners. Let's see who's the worst at that:

But it's not all bad. Let's check on the baserunning statistics. I couldn't find the one that Joe Posnanski is always using, so we'll using BP's EQBRR. (Equivalent Base Running Runs). Your best baserunner in 2010 is Chris Getz at a 1.2. Your bottom three are Jose Guillen, Alberto Callaspo, and Jason Kendall at -1.4, -2.1, and -2.7 respectively If only the young guys could follow the leadership of the veterans...

"Players think it's all about hitting home runs. Drive in runs. That's what will get them paid instead of moving the runner or getting the guy to second. I just don't see that respect for the game, moving the runners.

Attempting to drive in runs is awful and is something that should be avoided.

"The team I really admire is the Minnesota Twins. They do that so well. I love when we play them because that's what I want our guys to see. They (the Twins) are the smartest team in all of baseball. Them and the Angels. They do all the little things so well."

Well, the Angels do know when to cut bait on a malcontent. Does that count as a smart thing?

"I don't know if that's the way they bring them up in the minors and we don't do that or what," Guillen said. "But I was taught that stuff in the minors. Even now, I think of moving the runner from second to third with no one out, even though my manager might say 'Hey, I don't want you to do that. I want you to swing the bat. ' I understand that but in the back of my mind it goes back to how I was taught baseball....

Ignoring the advice of your manager, that's leadership right there. It shows the young guys how to play the right way. Sure the percentages may say it makes more sense for you to swing away with one out and a runner on second, but screw it, you weren't taught baseball that way.

"With the Pirates when I was coming up, the veteran players told you things. You can ask Jason Kendall. You did everything the veterans said you did. These guys, you tell them to be outside on time or we need to do this together, they say "Nah, I do my own thing.' Sometimes you want to just punch them but you can't do that because they're you teammates.

I've got to agree, that approach worked out well for the Pirates.

"Respect for the game has been lost. That pisses me off. When you get older, you like to be around guys with winning attitudes and winning atmospheres."

Nobody likes to play for a loser. Unless, of course, playing for the loser paid much, much better than playing for a winner. So playing with winners is important, just not as important as money.

Well, it's sad, but I don't think you'll be around for the good times Jose. Just in case, here's a little taste of what you'll be missing: 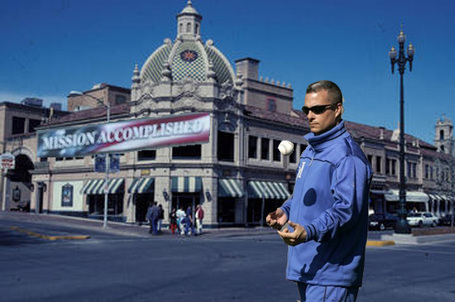