The 29th Greatest Royal of All-Time is Cookie Rojas.

Octavio Victor Rojas* was a Cuban born second-baseman and a long-time National League starter whose career appeared washed up when the Royals took a chance on him. Rojas rewarded their faith by rejuvenating his career, becoming a four-time All-Star, and one of the first fan favorites in Royals history. Rojas wore spectacles that gave him more the appearance of a librarian than an All-Star baseball player. He was never a flashy player, instead willing to let others share the spotlight, while providing quiet leadership. Bill James ranked him as the 69th best second baseman in history.

*-The nickname "Cookie" comes from the Spanish word "Cuqui", a popular nickname in Cuba that of course American sportswriters had to Anglicize.

Rojas was born in Havana, Cuba, signing with the Reds as a seventeen year old, despite his father's insistence that he become a doctor. Rojas rose through the ranks, eventually playing for his hometown Havana Sugar Kings, the AAA affiliate of the Reds in those heady days before the fall of Batista. His minor league numbers were a bit underwhelming, although his defense carried him to a cup of coffee in 1962. That winter, he was dealt to the Philadelphia Phillies for reliever Jim

"I was sitting at a table in Johnny Antonelli's restaurant with (Cincinnati Manager) Fred Hutchinson and Bob Lemon. I had permission from (General Manager) John Quinn to trade just about anybody on the roster and I whispered to Hutch, 'I'll give you (pitcher) Jim Owens for Cookie Rojas.'

"Hutch asked for 15 minutes, then came back and tried to get me to take Don Zimmer instead of Rojas. I told him that I didn't want Zimmer, and he said, 'OK, you've got Cookie.'

"Now, we've just made this monumental deal in which nobody knows who Cookie Rojas is and Hutch says, 'Who's going to have the guts to announce it?' He also says, 'I think you should throw in some money.' I said, 'How much?' He says, 'Four bits.'

"So I took out a dollar bill, ripped it in half and gave him half, which is how we got Cookie Rojas for Jim Owens and half a buck."
-Phillies Manager Gene Mauch

The Phillies had an All-Star at second base in Tony Taylor, so Rojas spent much of the 1963 season coming off the bench. In 1964, Rojas was used as a utility player, spending seventy games in the outfield and hitting .291/.334/.394 overall with just seventeen strikeouts in 377 plate appearances.

Rojas got off to a hot start in 1965, spending much of the year over .300, and that summer he was named to his first All-Star team. He forced his way into the starting second baseman job by the end of the year and finished the year with a career high .303 batting average.

"Cookie played like he practiced...He was always very well prepared. He had average speed, marginal power and marvelous hands. He worked at becoming adept at situation baseball....If the ball had to be bunted, if it had to be directed with the bat, he could do it against any and all people....Cookie practiced better than any player I ever had. He made himself into a winning player and a successful player."
-Phillies Manager Gene Mauch

"Cookie wasn't much of a hitter when he came to the Phillies, but he made himself into a .300 hitter. He learned quickly, faster than most."
-Phillies Pitcher Jim Bunning

Rojas spent the next four seasons as a utility player for the Phillies, playing mostly at second base, although he was versatile enough to play everywhere on the field. He was even called on to catch and pitch - tossing one scoreless inning. At second, Rojas teamed up on the field with Phillies shortstop Bobby Wine, who performed, as Dodgers announcer Vin Scully dubbed, "the plays of Wine and Rojas."

*-This is the trade where Flood refused to report, leading to the famous Supreme Court case - Flood v. Kuhn, which helped pave the way for free agency.

Rojas served as a bench player for the Cards, but after just twenty-three games and a .106 batting average, they had enough. The Royals were looking for some vets to lead their roster of youngsters and acquired Rojas for young outfielder Fred Rico. Upon being traded, Rojas contemplated retirement, but ultimately decided to play for the upstart Royals.

The Royals plugged him in at second base and he immediately hit, collecting hits in eleven of his first thirteen games, including a 4-for-4 performance against the Angels. He would hit .260/.296/.326 in 98 games with the Royals, solidifying second base for the young team.

That winter, Rojas decided to play Winter Ball and drop fifteen pounds. For the first time in his career, a team was expecting him to play every day at second base and he wanted to be ready. He was also expected to be a mentor for young shortstop Fred Patek.

Rojas got off to a sensational start, and was hitting .315 at the All-Star break. Left off the All-Star ballot*, Royals fans led a successful write-in campaign, and Rojas became just the ninth player to play in the All-Star Game for both the National and American League squads.

*-For some reason back then, not every team had a starter on the ballot. Odd.

Rojas ended the year right at .300, reaching career highs in on-base percentage and slugging percentage at .357 and .406, respectively. He committed just five errors all season and finished fourteenth in MVP balloting.

"The best second baseman I've seen this year is Cookie Rojas of Kansas City. Rojas may not range on defense like [Rod] Carew and [Davey] Johnson...But he's outhitting them all and, as a big plus, he's been the inspirational leader of the most improved team in the league."
-Ted Williams

Rojas was an All-Star second baseman with the Royals for the next three seasons, teaming up with Patek to provide solid defense up the middle.

"They were the first guys I ever saw work the play where, on a ground ball up the middle, the second baseman gets to it, backhands it and flips it to the shortstop with a backhand motion of the glove."
-Denny Matthews 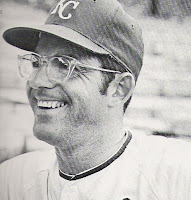 Rojas would never again be a .300 hitter, hitting .263/.314/.346 in his time with the Royals, but remember this was a dead-ball era in which infielders were not expected to hit much at all. His OPS+ for his stint in Kansas City was 83.

By 1976, Rojas was 36 and his skills had eroded. The Royals had a promising young infielder by the name of Frank White and Rojas was asked to mentor him - which he did, with total grace.

"Cookie was probably the first player who showed me what being a professional ballplayer was all about...It was Cookie who took Frank White under his wing and taught him how to take his job away."
-Buck Martinez

By 1976, Rojas was a utility player, supporting Frank and his teammates from the bench. The young team he had helped mentor for several years had matured into a playoff team. The night the Royals clinched the American League Western Division title, Rojas and Patek jumped into the Royals Stadium fountains in ebullient celebration.

Rojas retired after the 1977 season at the age of 38. He went into coaching, and was considered the fan's choice to manage the Royals upon the firing of Whitey Herzog. He eventually got his chance to manage in 1988 when he was named interim manager of the California Angels, leading the team to a 75-79 mark.

"I came in with a reputation of not being able to hit and I developed a reputation as a winning player who would do anything and play anywhere to help you win, who could not only contribute with his bat and glove but with the experience he passed along to the other players. And the more I played, the more determined I became to remain in the game when I retired."

Rojas now serves as an analyst for the Spanish language broadcast of Florida Marlins baseball. His son Victor, a Kansas City native, is a host for MLB Network.

"The more they said no, the more I told myself yes. Either you quit or work harder."

"For a guy they said couldn't play, I think I did a pretty good job."