Comparing Offensive Output of Royals and the Rest of MLB

Share All sharing options for: Comparing Offensive Output of Royals and the Rest of MLB

Fangraphs has a nice little stat hidden on their website called Weighted Runs Above Average ( or wRAA).  It measures the how much offensive contribution in runs that a player contributes compared to the rest of the league.  It takes into account both the number of at bats and the output from those at bats.  It is used as the offensive component of WAR.  This season, a 0.325 wOBA is needed to create a positive value.

I have gone ahead and plotted all the batters with over 200 at bats at a position so far in 2010.  The Royal's players are the blue dots.  I wanted to include their names, but the graph became jumbled, so I included a chart for clarification. 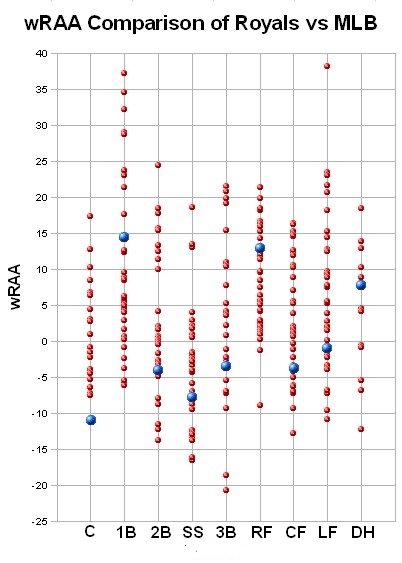 1. Only 3 Royals are producing at league average.  No real surprise there.