Turning Point in the Royals 4-2 Loss to the Tigers

Share All sharing options for: Turning Point in the Royals 4-2 Loss to the Tigers

Note: For this off season, I have to write an article for ESPN within 30 minutes after a playoff game is over.  It has to be 400 words on the turning point in the game. I will also be doing pieces here in the the same format until the end of the season for game recaps so I can get used to the format

Also, I am looking for someone to do a quick copy edit of the work once I am done.  I will try to get the person’s name at the end of the article, but no guarantees. Thanks for the response.  I have 3 people looking to help. 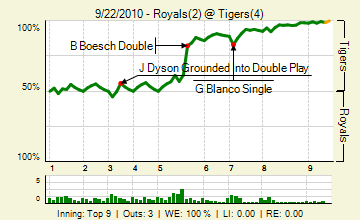 Kyle Davies threw 4 perfect innings until the bottom 5th when Miguel Cabrera got the first hit for the Tigers. He took a 93 MPH fastball to right field. Even though Miguel broke up the perfect game, Kyle did a decent job of pitching to him.

After getting Jhonny Peralta to strike out swinging, Ryan Raburn come to bat. Kyle did a great job of keeping the ball on the edges of the plate. He threw his first two pitches on the outside of the plate. The first one was called a strike and the next was fouled off. On the third pitch he came inside and Raburn was able to foul off the pitch to stay alive. On the next pitch, Kyle threw a 82 MPH change right down the middle of the plate and Raburn drove it to center field to put runners on first and second with one out.

Only Kyle would know where he intended the pitch to, there was no reason for Kyle to throw a ball any where near the middle of the plate. Raburn was already in protection mode before that pitch so he would be swinging at anything close to the plate. Kyle had couple of pitches to see if Raburn would chase a ball near or out of the zone before he would be required to throw a pitch in the heart of the zone.

With runners then on 1st and 2nd Brennan Boesch doubles driving in both runners. After a wild pitch, Brandon Inge singles driving in the third run of the inning. Those three runs were all the Tigers needed. The Tigers added an insurance run in the eighth and Royals were able to break up the shutout with a Billy Butler 2-run home run in the bottom of the ninth

There is no way to determine what the events would have been if the pitch was not thrown down the middle, but the pitch location, considering the count, was not the correct decision.