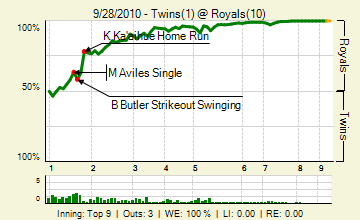 With the Royals winning 10 to 1, the Twins weren't in the game after the 1st inning. The early deficit was started when first baseman Kila Ka'aihue hit his 6th home run of the season with 2 players on base. Kila went on to hit another home run, a triple and walked once. The early lead set the tone in the game as the Royals scored 8 runs versus the Twins starter Nick Blackburn in 4.1 innings. Nick has not been the greatest of starters this season with a 5.23 ERA coming into the game, so the Twins didn't expect him to shutout the Royals. They probably did expect him to do a better job of limiting the runs allowed by the Royals offense.

The early lead was nice for the Royals, because saying Royals starter Sean O'Sullivan is bad is an understatement as he came into the game with 7.21 ERA.  I am sure the Royals hitters figured they would have to score a few runs to help O'Sullivan. That ended up not being the case as O'Sullivan allowed only run in six innings of work. He was a little lucky in that he allowed 5 hits, gave up six walks and only stuck out one batter over those 6 innings. The Twins just couldn't get a clutch hit to get some runners home by being one for ten hitting with runners in scoring position.

The lead gained from Ka'aihue's home run gave the team and O'Sullivan the confidence that they had a chance to win the game and they just continued on from there. Sean is not a strikeout pitcher, so he need to pitch knowing the defense had his back The defense was able to help him tonight with Alex Gordon making a nice diving catch in left field and Mike Aviles made a nice jumping catch at 2nd base. Hats off to the Royals tonight for taking an early lead and never looking back.